Mild hybrid technology will launch on the new Kia Stonic in 2019, with an all-electric version under consideration, too 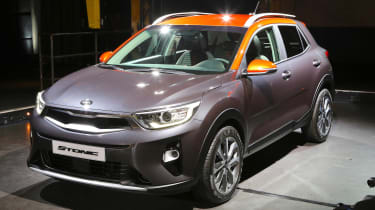 The all-new Kia Stonic will get mild hybrid tech in 2019, helping drive down CO2 emissions and boost performance for the compact crossover. Bosses are assessing the feasibility of an EV version, too.

Initially, the Stonic will launch with two petrol engines and one diesel unit. The hybrid tech will likely be added to one of the petrol motors to help lower emissions and boost performance. It will work in a similar fashion to Suzuki’s SHVS system, storing surplus energy to power things like the air-con and radio in stop-start traffic. Acceleration and throttle response should see a boost, too.

Speaking at the launch of the new SUV in Berlin, Kia Europe’s vice president for marketing Arthur Martins told Auto Express: “We are looking at mild hybrid for the Stonic.”

While the Kia Stonic won’t be offered as a full hybrid or plug-in for the time being, an all-electric version is in the pipeline. Despite bosses previously denying speculation, a Kia spokesperson has confirmed the brand is looking at the tech – insisting a full EV is “doable” on the Stonic’s platform, which it shares with the Rio supermini.

Rather than developing bespoke EVs, Kia will electrify its existing product range. No time frame was given for the all-electric Kia Stonic, but with the Soul EV already on sale and a Niro EV due in 2018, the range isn’t in need of immediate bolstering. However, with Kia’s notoriously short product cycles, it’s likely we’d see an electrified version of the Stonic before the end of the decade.

Would you buy an all-electric Kia Stonic? Let us know in the comments section below...