Kia's entry into the booming B-segment crossover market builds on the strengths of the Rio supermini but is that enough to get it ahead? 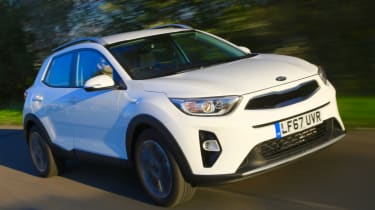 Unlike many of its rivals, the Kia Stonic fails to sufficiently differentiate itself from the Kia Rio on which it is based. Its low-slung driving position is at odds with its SUV styling, and while it’s good to drive, the cramped cabin doesn’t offer much more space than you’ll find in a Rio. This diesel is a bit coarse, too, with the 1.0 turbo a much more refined choice. We’ll need to wait until full UK prices have been revealed, but with estimates suggesting a sizeable premium over the supermini – our money would go on the humble hatchback instead.

Kia reckons the B-SUV market will double in size by 2020 – meaning it could account for as many as 2.2 million units each year in Europe alone. The Rio-based Stonic crossover is the model bosses hope will steal a sizeable share, joining the hybrid Niro, mid-size Sportage and larger Sorento in the brand’s growing SUV line-up.

Think of the Stonic as more of a ‘Rio Cross’ than a standalone model and you won’t be far wrong. Its similar swept-back headlights flank a slightly condensed tiger nose grille, while the fog light housings have been adapted for the taller bumpers.

From the A-pillar back the Stonic is quite a different car, however. It boasts a set of sharp roof rails and a ‘targa-style’ body-coloured C-pillar, while at the rear the full-LED lights and silver scuff plates complete the look. Design is the main driver for B-segment SUV buyers, and it’s clear Kia has gone to town on making it’s smallest crossover stand out from the crowd. 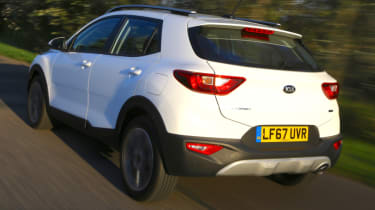 Inside, the Stonic’s youthful appeal continues. The design isn’t too dissimilar to the Rio’s on which it is based, but there are flashes of colour plastered across the dash giving it a vibrant and less sobering appearance. Perceived quality is on par with many rivals in this class, but falls short when compared to hatchbacks like the new Volkswagen Polo or Ford Fiesta.

Two specifications are available for Stonic at launch – an entry-level ‘2’ trim and the flagship First Edition. Prices will start from £16,295 for a basic 1.4 petrol but it’s the faster and more efficient 1.0 turbo that Kia expects to be more popular – though no official costs for that car have been announced just yet. All versions come with a six-speed manual gearbox for now, and despite its jacked-up stance, there is no 4x4 option. A 108bhp 1.6-litre diesel tops the range, and is the car we’re driving here for the first time. Again, prices haven't yet been revealed.

All models are generously equipped and customisation is key to the new car’s appeal. There’s no super-basic 1 trim (like on Picanto or Rio), and our 2-spec car gets a seven-inch display with Apple CarPlay and Android Auto, DAB radio and Bluetooth. Every version gets 17-inch alloy wheels, too, as well as LED daytime running lights and rear parking sensors. There’s a long list of paint choices, as well as contrasting roof colours on First Edition cars. You can even spec your door mirrors in lime green, red or orange.

The list of safety kit is pretty impressive, too, though Autonomous Emergency Braking (AEB) and Lane Departure Warning are confined to the options list on 2-grade cars. Electronic Stability Control (ESC), and Hill-Start Assist are standard, however, alongside as Kia’s Vehicle Stability Management (VSM) programme, which includes Torque Vectoring, Straight Line Stability and Cornering Brake Control. 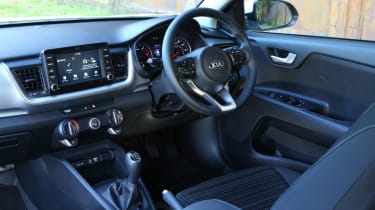 The Stonic is slightly longer than the Rio on which it is based. Ride height has been raised by 42mm, too, making the crossover 70mm taller overall. But the wheelbase remains the same, and as a result it doesn’t feel all that big inside. The low-slung driving position means it feels more closely aligned to the Rio than a Renault Captur does to its Clio cousin, while its cramped rear cabin will prove tight for taller passengers.

That longer rear overhang does make for a bigger boot, however. While the Rio claims a 325-litre load bay, the Stonic boosts this to 352 litres. Fold the seats down and things improve further, with the crossover’s total volume measuring a decent 1,155 litres compared to the hatch’s 980-litre cargo area. The cabin is littered with cubbies, and the door bins are a good size. But a Peugeot 2008 is bigger in every respect.

On the road, where many rivals benefit from a bit more cushioning due to the raised ride height, the Stonic is firmer and remains planted over undulating surfaces. It certainly sharper to drive than a Renault Captur – with less body roll and more precise steering – but on broken roads the stiff chassis can fidget slightly. That’s only likely to get worse in the UK, so those looking for a crossover to smooth-out speed bumps and potholes will be better served elsewhere. 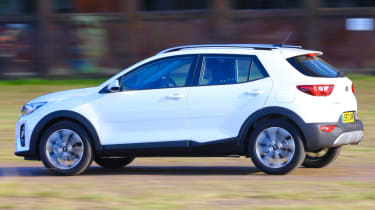 The torquey diesel engine is a solid performer, but the new 1.0-litre turbo is by far the pick of the range. It’s immeasurably quieter at idle, and its responsive nature means it’s more fun to rev out, too. The diesel kicked out an intrusive drone at motorway speeds, though the cabin seemed well insulated from wind and road noise.

Running costs for this diesel model are acceptable but far from ground breaking. The 1.6 CRDi will return a claimed 67.3mpg and emit 109g/km of CO2. A Nissan Juke 1.5 dCi should do more than 70mpg, however, while also sitting in a slightly lower company car tax band. The more desirable Stonic for private buyers will be the turbo petrol, however, which should return more than 50mpg in mixed motoring.

Kia bosses reckon you’ll be able to get a new Stonic from around £225 per month on one of its PCP monthly finance deals. That’s over a three-year term with a 15 per cent deposit and a 9,000-mile annual limit. Peugeot offers similar deals for less, though you’ll pay extra to spec your 2008 with all the extra kit found on every new Kia. Low insurance groups (10-14) will help the car appeal to young buyers, too.