The Kia Stonic has entered into a crowded SUV market. Can it compete with the class leaders? 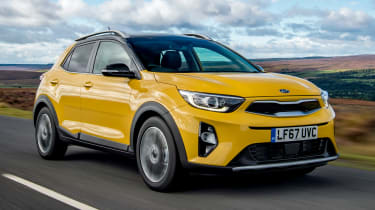 The Kia Stonic is a wholly competent, solid and decent to drive small crossover, but it fails to really make its mark on the sector in any area. There are more practical, better value and more comfortable choices, although the Kia isn’t totally outclassed. Perhaps its biggest failing, we feel, is that it lacks character, and in such a competitive segment that means it struggles to stand out.

In case you somehow hadn’t noticed, small SUVs are flavour of the month. Along with many of its main rivals, we’re now driving the Rio-based Kia Stonic on British roads for the first time, in desirable turbo petrol form. Does it make more sense than the mid-range diesel?

Designed to compete with the Citroen C3 Aircross and Hyundai Kona, Kia design boss Peter Schreyer has gone for cleaner, less busy approach to the Stonic’s styling. The Tiger Nose grille and swept-back headlamps are shared with the Rio, but it has a more muscular, squatter stance. However, with character and distinctiveness in relatively short supply, the Stonic requires brighter colours to truly stand out. Thankfully, Kia offers a number of contrasting roof colours to liven things up.

The same can be said for the interior. As we’ve come to expect from modern Kias, the design is functional and fit and finish is almost faultless. The touchscreen is easy to operate, too, and everything is where you’d expect it to be. But other than a splash of painted plastic on the dash that matches the chosen roof colour, there’s little surprise to be found; almost all of the plastics used on the doors and dash are dark and hard to the touch. It’s the complete opposite of the airy, feel-good cabin found in the C3 Aircross. 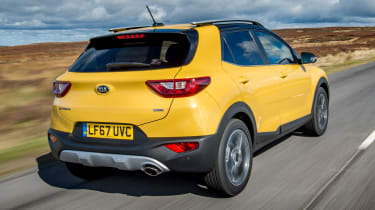 The driving position is lower than most crossovers of this type, which may suit keener drivers, but it’ll miss the mark for those after the elevated seating often associated with crossovers such as this. The Stonic is taller and wider than the Rio, but shares that car’s wheelbase, meaning that while headroom is good for adults in the rear, legroom is only adequate. The 352-litre boot falls behind most small, similarly priced SUVs, too.

The Stonic is more competitive on the road, however. It handles with composure, feeling pretty agile and showing good resistance to roll. The steering lacks feel but is well-weighted and direct, while the gearchange is slick. While this is perhaps less important for small crossover buyers than how it looks, it’s reassuring to know the Stonic can hold its own in the bends.

That fluid handling is largely thanks to Kia retuning the suspension from the Rio to suit the Stonic’s higher centre of gravity. Unfortunately, this results in a rather fidgety ride – it smooths over larger bumps quietly enough, but low frequency ripples in the tarmac make themselves known. Part of that could be due to the large 17-inch alloys, which are standard on every model. Still, it keeps passengers well isolated from unwanted wind and road noise. 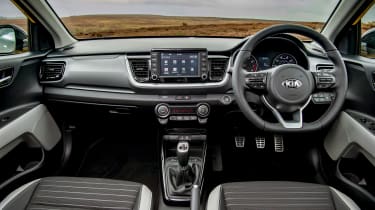 While a 1.6-litre diesel engine is available, we think this 118bhp 1.0-litre three-cylinder turbo petrol will be a better buy for most. It’s smooth, reasonably quiet and, while needing more revs to get the best out of it than some three-cylinder engines, it offers a decent turn of pace. It also manages a decent 56.5mpg on the combined cycle.

Kia’s association with outright value for money was wiped away some years ago, and the Stonic is far from the cheapest in the sector. Our First Edition model gets sat-nav, Apple CarPlay and Android auto, keyless entry, heated seats and autonomous braking, but at £19,695 it begins to encroach on larger family SUVs.

Better value is found lower down the range, as Kia’s familiar 2-spec keeps the touchscreen (albeit without sat-nav) and most of the essentials. PCP deals will undoubtedly make it cheaper and easier to move up the range, however.