There's no denying that the Citroen C3 Aircross' looks make it stand out from the small SUV crowd, but what's it like from behind the wheel? 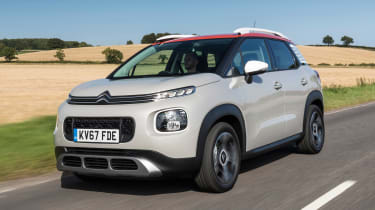 To succeed in the ever-crowded small SUV market you need a product that stands out, and the C3 Aircross does just that. Its unique and characterful design is perfect for this fashion-led sector, while the interior introduces a welcome feel-good factor. It’s very practical, too, and while there are rivals that are better to drive and plusher inside, family buyers will be very well served with Citroen’s latest arrival.

Citroen’s model line-up became a little more confusing with the introduction of the new C3 Aircross. Sitting alongside the C4 Cactus at roughly the same price point, the brand’s replacement for the unfashionable C3 Picasso mini-MPV is similarly practical, comfortable and funky to look at. And until Citroen updates the C4 Cactus later this year to help it move away from its new sibling, buyers will have a tricky decision to make at the dealer.

Still, if you’re going to offer more than one car in a single segment, its best to make it an SUV. Crossovers such as these are continuing their march up the sales charts at a decent lick, with new arrivals such as the Kia Stonic, SEAT Arona and Hyundai Kona all launching within the next few months.

Our first drive of the new Citroen C3 Aircross in the UK is of the predicted best seller: the middling 109bhp 1.2-litre turbo petrol in popular Feel spec. 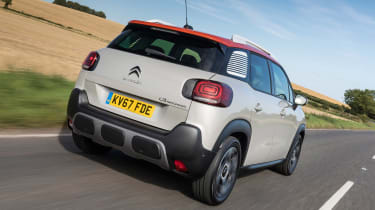 Alongside some of the more ‘me too’ offerings in the supermini-SUV class, it’s clear Citroen has its own ideas about what small car design is all about. The Aircross’s face and many of the details are borrowed from the C3, but it’s around 160mm taller, with a more imposing front-end and chunky lower body cladding. There are 85 body and roof colour combinations to ensure plenty of scope for personalisation, and while it’s a design that won’t be to all tastes, it’s one that is fun and distinctive – offering a real breath of fresh air in an otherwise conservative car market.

The interior gives the same vibe, with a light and airy feel throughout and comfortable (if slightly unsupportive) armchair-style seating. The design, again, will be very familiar to C3 owners, and can be specced in a wide variety of colours and materials.

It’s reasonably solid and feels built to last – much more so than some of Citroen’s past efforts. But many of the plastics are hard and scratchy to the touch, particularly on the doors. Feel-spec models offer a decent kit tally, including a seven-inch touchscreen that controls infotainment and temperature settings. With Android Auto and Apple CarPlay as standard there’s no doubting its breadth of features, though we still reckon it should be easier to operate on the move. 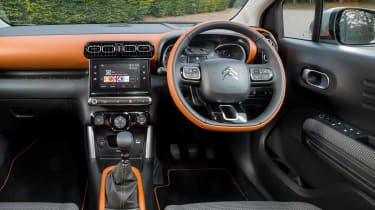 If there’s one area where the C3 Aircross makes the C4 Cactus look a bit redundant, it’s versatility. Whereas the Cactus features a fixed one-piece folding rear bench, the Aircross’s back seats can split 60:40, as well as offering the function to slide backwards and forwards, or recline – for increased passenger room or improved bootspace.

Space for adults in the rear is good, although avoid the panoramic glass roof of top-spec models as it eats noticeably into headroom for taller passengers. And the boot, which extends to 520 litres when the rear seats are slid forward, is bigger than almost every rival at this price.

Underneath the C3 Aircross is the same PF1 platform that underpins a whole host of Peugeot and Citroen models, as well as Vauxhall’s new Crossland X. While you’d be right to assume it’ll drive much like the C3 hatchback, Citroen has firmed things up a bit to stop the tall body swaying too much in the bends, and it has done so to reasonable success. The Aircross keeps body movement in check unless you push really hard, and while the steering is light, it is at least accurate. 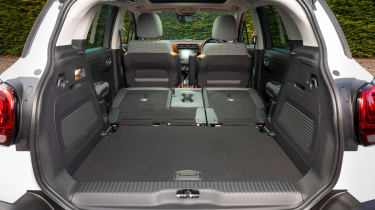 The less forgiving setup means that, while the ride is generally comfortable, composed and in-keeping with Citroen’s mantra, sharp bumps can jolt through the cabin and the suspension can get a bit noisy on rutted tarmac. It’s not the class dynamic benchmark, but it’s certainly good enough for the target market.

Wind and road noise is kept at bay commendably, too, while neither the petrol or diesel engines are particularly raucous unless pushed. Our volume-selling 1.2-litre PureTech turbo petrol unit is as strong and torquey as it always has been, and claimed returns of 56.5mpg are competitive in this class.

In fact, our only real complaint with the driving experience is the baggy long-throw five-speed manual gearbox, which is a traditional Citroen trait.