If you’re not sold on the idea of small SUVs as an alternative to superminis or even family cars, the SEAT Arona is unlikely to change your mind. But for those who are keen on a higher driving position in this size of car, it’s a well-judged entry to the rapidly expanding class. It’s not the most practical offering out there, and some may find the cabin a bit too sombre - but the three-cylinder models in particular should offer an appealing mix of a comfortable, refined drive, plenty of standard equipment, and decent economy and performance.

It’s rush hour for new small SUVs at the moment. We’ve recently sampled the Citroen C3 Aircross and the Kia Stonic; now it’s time to try the SEAT Arona, the first offering in this burgeoning market from the colossus that is the VW Group.

The Arona is, in effect, an SUV version of the latest Ibiza, because it shares a lot of the supermini’s mechanicals. Chief among these is the chassis, which is the A0 version of the VW Group’s MQB platform technology. The Arona is a larger vehicle, though - nearly 10cm longer overall and with a couple of extra millimetres in its wheelbase. Its roofline sits more than 12cm taller, too.

There are three petrol engines in the initial line-up: a 1.0-litre three-cylinder unit, producing either 94bhp or 114bhp, and a 1.5-litre four-cylinder motor with 148bhp - and the ability to turn of cylinders when you’re cruising along, to help save fuel. The entry-level engine gets a five-speed manual gearbox, the more potent three-pot can have either a six-speed manual or a seven-speed dual-clutch automatic, and the 1.5 is a six-speed manual only.

All three petrol engines emit between 112g/km and 118g/km of CO2; this puts the automatic Arona some way clear of its two-pedal rival in the C3 Aircross line-up, which emits 126g/km.

The diesels are all 1.6-litre units - and they all manage less than 110g/km of CO2 emissions. There’s a 94bhp version (paired with a five-speed manual gearbox or a seven-speed DSG), or a 114bhp variant that gets a six-speeder.

All Aronas are front-wheel drive. There’s not even the slightest hint of off-road potential here, in fact; in this respect, the C3 Aircross’s traction control-based Grip Control system looks positively adventurous.

There are three core trim levels, albeit with a few variations. SE gets metallic paint and a contrast roof as standard, along with 17-inch alloy wheels, LED daytime running lights and tail-lights, front and rear electric windows and a media system with a five-inch touchscreen. A contrast-colour roof and an adjustable-height boot floor are also included. SE Technology upgrades the infotainment on the entry-level version to an eight-inch display, incorporating a navigation system - and adds rear parking sensors to boot. 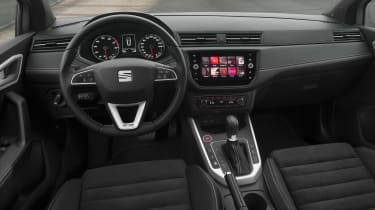 The range-topping trim is called XCELLENCE. It gets many of the same features of FR, minus the sports-focused elements, but adds extra practical touches with a Storage Pack, plus keyless entry and start, blind spot detection and a rear-cross traffic alert system. XCELLENCE Lux then takes this spec and rolls in black Alcantara seats, front parking sensors, a rear-view camera and Park Assist, along with 18-inch alloys.

SEAT says the line-up is designed to allow the car to be sold purely on trim levels, with a relatively short options list. It’s worth remembering, though, that the 1.5 engine is available only with FR and FR Sport trims. This seems an odd decision on SEAT’s part, because it means the most upmarket trim level has to make do with three-cylinder power and a maximum of 114bhp.

Even so, SEAT believes customers will be willing to pay a bit more for the extra height and personalisation offered by the Arona - which is why the line-up starts with SE trim instead of the firm’s more basic S. The car’s prices start at £16,555 for an SE with the 94bhp petrol engine; that’s around £1,200 more than the entry-level Renault Captur, and £2,500 above the starting point for a C3 Aircross - although neither of these cars would be anywhere near as well specced as the SEAT.

We’ve only seen early figures for finance deals, and they’re over four years instead of the usual 36 months - but they look pretty keen. Bring a deposit over just over £1,000 for the 1.0-litre SE model and SEAT will almost match it, taking the monthly cost on a 10,000-miles-per-year deal down to around £199. That seems competitive against the Arona’s rivals, many of which don’t get as extensive a kit list as the SEAT’s entry point. 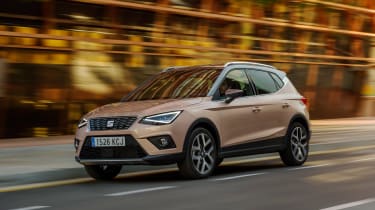 The boot capacity is 400 litres with the rear seats in place; that’s par for the course for the class, really, although it’s worth pointing out that the C3 Aircross’s rear seats move fore and aft to switch its load bay from 410 litres up to 520 litres - a useful advantage over the SEAT.

This gap widens further with the rear seats lowered; the Arona offers 823 litres, while its French rival manages a whopping 1,289. We suspect measurement techniques are to blame for at least some of the difference, though, and at least the Arona’s boot shape is sensible. If you’re after some context, it should be easily enough for a couple of decent-sized suitcases, or the biggest of weekly family shopping loads.

We’ve tried the mid-spec and high-spec petrols, both with manual gearboxes. The 114bhp 1.0-litre unit (badged 115 because of its metric horsepower figure) is a game little motor that has just about enough oomph to make the Arona feel borderline brisk if you push it along. There’s no discernible surge of low-down turbocharger shove, though; it’s pretty linear from about 2,000pm upwards, and that means you’ll need to be prepared to rev it hard if you want to go anywhere really quickly.

The six-speed gearbox helps with this, because it has a pleasingly short throw and the shift feels precise in the hand. 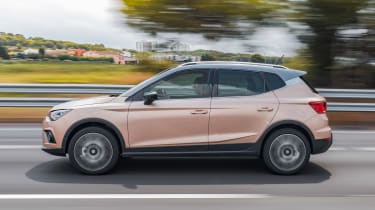 Once you are up to a decent speed, you’ll hear a distant thrum that’s smooth enough but also audible enough to remind you that your car does have a three-cylinder engine, not a four-pot. On the 17-inch wheels of our test car (a Spanish model that had the mechanicals of a UK FR but the cabin of an SE Technology), the biggest noise at a motorway cruise was wind rush from around the usual SEAT sharp-angled side mirrors. There is a bit of three-cylinder vibration through your feet, though, especially via the clutch pedal.

The steering is light - perhaps a little too much so for our liking - but it soon becomes easy to trust where the front wheels are pointing. As with pretty much all of its rivals, the Arona is set up to understeer if you show too much enthusiasm entering a corner. But in the most part the body is well enough controlled for a swift, if slightly uninvolving cross-country journey.

The 148bhp unit doesn’t feel ‘hot’ but it’s still quite a powerful engine for a car of this size. Again, though, the power delivery is pretty linear, so you can expect the engine to pull you along happily from around 1,500rpm to 4,500rpm and beyond. It does start to get a bit vocal in the top third of the rev range, but you’re unlikely to need to go there in all but desperate overtaking situations.

Our Spanish-spec 1.5 was in the loose equivalent of FR Sport trim, which brought 18-inch wheels along with the sports suspension. We were pleasantly surprised at low-speed ride; this more focused-looking Arona still behaves itself over speed bumps, for example. But there’s a little more patter at speed and the SEAT Drive Profile (standard on FR and FR Sport) doesn’t do much beyond weighting up the steering for a sportier feel as you strain to exploit the modest improvement in body control. 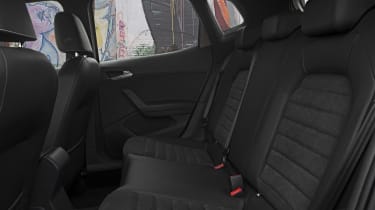 UK FR Sport cars will also get SEAT’s Dynamic Chassis Control for greater configurability, incidentally, but we’d still be inclined to opt for ‘pure’ FR for the sweetest set-up.

The cabin is linked closely to the Ibiza’s, as you might expect, and it’s smart but oh-so-sensible. Still, that does mean that SEAT’s excellent infotainment screen is mounted in an ideal position, high up in the centre of the fascia, and you do get separate heating controls so you don’t have to leave your music or maps behind to raise the cabin temperature by a degree.

The finish is clever, in that there are plenty of textured plastics and a bit of coloured trim but precious few soft-touch surfaces; in SE Technology, in fact, the only padded bits in the front cabin appear to be the seats (obviously), the centre armrest and the door armrests. Our FR Sport car had some stitched leather material in front of the passenger that looked a bit more luxurious.

Few occupants are likely to complain about headroom, which is excellent in the front and rear, and there should be enough shoulder space for four adults to get along in comfort. Six-footers will find kneeroom more more of an issue in the back seats than they would in a C3 Aircross, however.