Final report: the SEAT Arona SUV crossover is a great all-rounder, but we’ve struggled to bond with it in its time on our fleet 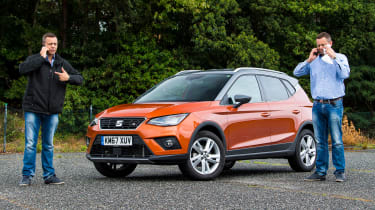 It’s not you, it’s me. While the Arona is a refined, practical and objectively excellent SUV crossover, I just didn’t bond much with the SEAT during its time on our fleet.

What do you want from a small SUV? Does it need to be comfortable, easy to get in and out of, provide a good view out and have a big boot? Should it also feature a top-notch infotainment system, have a decent turn of speed and be capable of offering some light entertainment on A and B-roads?

If so, the SEAT Arona fulfils all those criteria. When it arrived on our fleet in April, the SUV was quickly put to use making frequent return trips to Wales for camping and climbing excursions. We also piled on the miles attending magazine features in it up and down the country, and ran it as an airport shuttle when we headed abroad.

At every one of these junctures, the Arona impressed me. The raised ride height means it’s a cinch to get in and out of, a feature that is likely to appeal as much to parents when loading their children as it does to me arriving back in England after a delayed flight has landed. The 400-litre boot ensured that when our photographers borrowed the Arona, they had no difficulty stowing their bulky tripods and lenses, plus other kit. 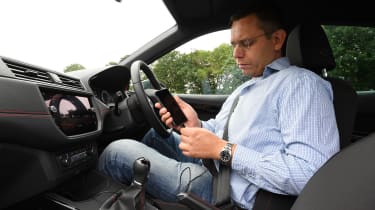 The SEAT is enjoyable to drive in many respects, too. Its 113bhp 1.0-litre turbocharged petrol engine is willing and engaging, providing a characteristic three-cylinder thrum when accelerating briskly, yet becoming an inconspicuous companion on motorway cruises.

On smaller, slower roads, the Arona is just as happy thanks to its grippy, predictable driving experience. I’m also a fan of the gearbox, which is really precise. And while the clutch is a bit too light, the gearbox’s action is positive and the engine is well matched to the ratios.

I found the SEAT a perfect town car as well. Its relatively long-travel suspension minimises the discomfort caused by London’s pothole-filled roads and its small size means it can slip easily through tight gaps in traffic.

Some colleagues felt the Spanish SUV could do with a more powerful engine, and while motorway overtakes sometimes required you to drop down two gears instead of one, with 200Nm of torque it’s more than possible to pass slower traffic in sixth gear without much effort. Besides, the more powerful 1.5-litre petrol engine will cost you an extra £1,400, and we can’t help feeling our car’s price tag is about the limit for what you should spend on an Arona.

Finished in eye-catching Eclipse Orange paint with contrasting silver roof rails, our car also stands out from the crowd, aided somewhat by the ‘X’ motif embossed on its C-pillar. I wish a similar flourish had been applied inside, though.

For while the cabin is comfortable and functional, it is a sombre place to be in, and the red stripes on the seats’ upholstery do little to alleviate this. 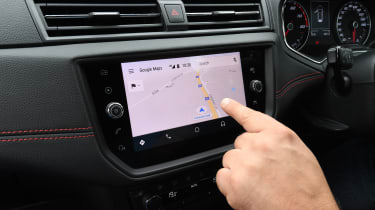 Some of my other reservations relate to the Arona’s height. Its stature may mean getting in is easier and the view out is good, but on motorways the Arona’s tall ceiling and resulting upright screen led to some extra wind noise, while on smaller roads there’s a lot of body roll from the raised suspension compared with an Ibiza supermini. Still, at least our FR model’s slightly stiffer set-up went some way to counteracting that.

My main niggle with the car was entirely subjective and emotional, however: I never really warmed to the Arona, and ultimately failed to feel much affinity for it.

By most yardsticks it’s a thoroughly competent, convincing car, and can hold its head high in the competitive crossover segment, thanks in part to offering a more convincing driving experience than cars such as the Renault Captur and Hyundai Kona.

Personally, though, I’d eschew the slight comfort and practicality advantages offered by its SUV status, and choose SEAT’s more sweetly proportioned, sharper Ibiza instead. The supermini is cheaper to buy and better to drive with it. 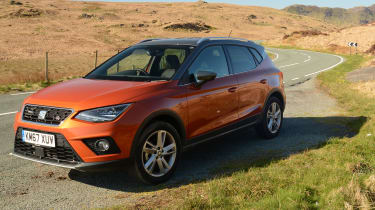 With no end to the excellent weather and scorching sunshine in sight, I took our SEAT Arona on yet another trip to North Wales recently for some outdoor pursuits.

The SEAT’s 400-litre boot was loaded with hiking gear, a tent, a couple of sleeping bags, plus food and other essentials. And while all the kit could have been packed in a more orderly fashion, the space on offer proved more than adequate for the 500-mile round trip.

In fact, the Arona continues to impress on long journeys. Since our last report, I’ve racked up more motorway miles in the car, and have been impressed by its comfort and usability.

The tech inside is working well, too. So far the sat-nav’s traffic alerts have proven useful, helping us navigate past some A-road jams, and I’ve started using Android Auto to access some of my phone’s features while driving. 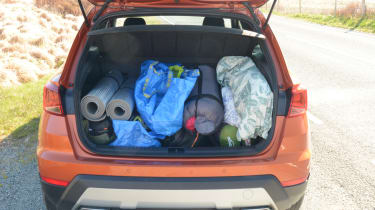 Our fleet currently boasts another orange SUV, which is the Citroen C3 Aircross run by my colleague, picture editor Dawn Grant. I was keen to have a quick go in it a few weeks back, and noticed some differences.

For starters, the Citroen’s boot is bigger than our Arona’s, and the ride more comfortable. While this is better when driving over potholes and bumps in town, I think I’ve got the SEAT’s spec right when it comes to twistier rural roads. The stiffer suspension set-up on the Arona FR means there’s less body roll compared with the Aircross and the handling feels sharper.

Dawn and I will have to carry out a proper back-to-back test – a small SUV orange crush – to see which of us is running the better model on the fleet. 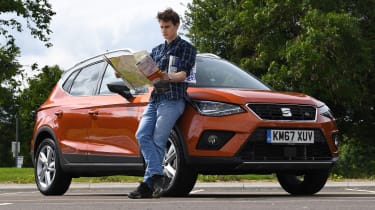 Since we took delivery of our SEAT Arona, it’s been all over the country transporting me to and from the various features I’ve put together for Auto Express. My love of the outdoors means it’s also been a go-to car for frequent trips to North Wales. So how has the little 1.0-litre petrol crossover SUV fared on the long drives?

On motorways the Arona has proven surprisingly capable. Even if I leave it in sixth gear, there’s just enough grunt from the 113bhp 1.0-litre turbo to accelerate past slower traffic. The front seats are comfortable, thanks to good support around the back and sides; I’ve done more than 550 miles in a single day without any real aches or pains.

Another highlight from the many motorway runs is the fuel economy; at 48.2mpg, the SEAT is very frugal. 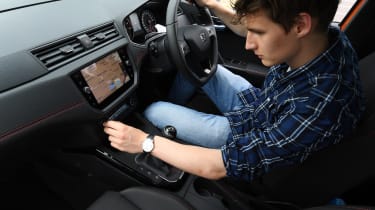 The long road trips have also allowed me to put the Arona’s practicality to the test. Camping and hiking trips to Wales with my girlfriend meant using all 400 litres of boot space, while cycling breaks involved putting the back seats down.

So far the Arona hasn’t disappointed. I’ve yet to have the rear seats full of passengers, so a final verdict on practicality will have to wait. But while there’s not much central cubby storage, the side pockets take water bottles as well as the usual road-trip snacks.

On Welsh back roads the car soon finds its limits, though. The narrow power band of the 1.0-litre engine means you’re constantly shifting gears to maintain momentum.

The stiffer suspension (standard on our FR) gives the Arona decent balance, but because of the raised ride height, there is still a fair amount of body roll through corners, so you have to pick your line well before entering a bend. As long as you adjust your driving style so you keep momentum through turns instead of counting on being able to accelerate quickly out of them, it’s fun to drive.

Campsites and trailheads have given me a chance to explore how capable the Arona handles mild off-roading as well. I’ve yet to have any trouble, although I suspect more challenging trails would highlight the lack of a four-wheel-drive powertrain (not that a car in this class really needs it). 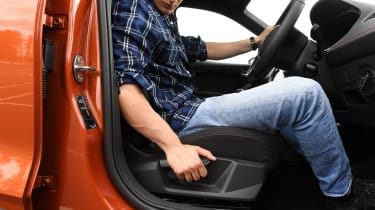 In our previous report, I mentioned that the brakes were taking some getting used to. They are still slightly too sensitive for my liking, but the feedback has definitely improved over the few thousand miles I’ve put on.

The next few weeks will see the Arona return to SEAT for a recall to fix a seatbelt issue. Once it’s back, one aspect I’m keen to explore more is the technology inside the car; it’s impressed me so far, but I’m planning to dive in deeper. 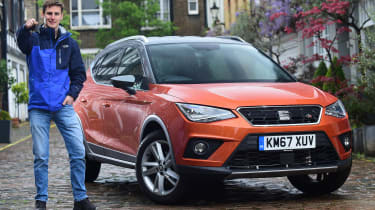 The supermini SUV is the latest vehicle sector manufacturers are busy trying to conquer. Buyers love them, so we will be running a new SEAT Arona for the next six months to see what all the fuss is about.

At a glance, the Arona looks remarkably like our previous SEAT Ibiza. This is because it sits on the same platform – but don’t think of it as merely an Ibiza with a raised ride height; the Arona is slightly longer and taller than its supermini stablemate, and comes with more luggage space.

We’ve gone for sporty FR spec, which brings stiffer suspension and pumped-up styling. Inside, there’s a standard-fit eight-inch touchscreen that includes smartphone integration. In fact, the SEAT’s tech is something I’m keen to investigate later on, because many supermini SUVs are targeted at young buyers who prioritise such features. 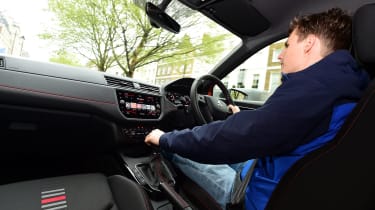 Another priority for young drivers like me is economy. That’s why Auto Express has opted for the frugal 113bhp 1.0-litre three-cylinder TSI petrol that SEAT claims will return 57.6mpg. Over the next few months, I’m keen to see how close to this I can get; so far, I’m on 47.7mpg.

The taller ride height suits me well; it means I don’t have to worry about the potholes and stretches of broken tarmac troubling the roads of south-west London where I live. The small dimensions make the SEAT easy to park, too. The only downside I’ve noticed is the brakes. They feel quite grabby around town, but I’m hoping this will soon calm down.

Over time I’m keen to find out how practical the SEAT is, and I aim to take it on a few long trips to Wales. The more focused suspension set-up should lend itself well to the twisty roads there, while I’m hoping the 400-litre boot will be big enough for all my gear. I’m also curious to see how the Arona tackles motorways, as I’ll be using it a lot covering magazine features. The 1.0-litre engine feels nippy enough in the city, but I’m keen to find out how refined the car is at higher speeds.

One plus I’ve already noticed is the six-speed gearbox. It’s something that should make the car more refined than some of its rivals that come equipped with a five-ratio box as standard.