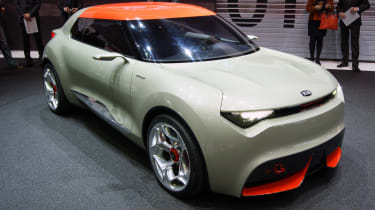 Kia has unveiled its new MINI-rivalling provo coupe concept at the Geneva Motor Show, and Auto Express got up close with the stylish new model before it hit the stand.

The provo may be a concept, but Kia has thought out every aspect of the design to ensure it can be put into production if public reaction is positive.

The car is designed as a sporty brother to the Rio, and would replace the Venga compact MPV in the range, even though the two are very different in character. The Venga’s image is sensible and spacious, while the provo is striking, sporty and stylish.

In a departure from the norm, a swarm of LEDs where the front light clusters should be can produce anything from a traditional headlamp to a flowing strip of indicator lights – or even a representation of the Swiss flag.

The LEDs are separated by a black strip across the front of the grille. Sitting in the middle is a subtle orange accent, narrowing the grille slightly to bring it in line with Kia’s ‘tiger nose’ design. “We want to know the future of the tiger nose, and this could be it,” explained Kia Europe head of design Gregory Guillaume.

The C-pillar links both sides of the provo through the roof, which Guillaume says “holds the whole car together and makes it look strong”.

In character, the provo’s a mix between the MINI hatch and the two-seat MINI Coupe, with Kia describing it as a 2+2.

Passengers could certainly squeeze into the back, but it would be a tight fit. The car rides on a slightly shorter wheelbase than the Rio and has a wider track to help its sporty stance.

“In production we’d have to use the same track as the Rio, but the wheelbase could be shorter,” Guillaume admitted.

The cabin is uncluttered, with only simple controls and not many buttons. There’s no gearstick or handbrake lever, and the infotainment is controlled via a touchscreen and rotating dial.

Under the bonnet is a four-wheel-drive smart hybrid system. A combination of 1.6-litre turbo engine and electric motor gives 246bhp overall, and while the concept’s powertrain is unlikely to make it to production, Kia could simply slot in any one of the Rio’s petrol or diesel engines.

Officially, Kia says it’s waiting on public reaction before giving the provo the green light, but you get the sense it already knows it’s got a hit on its hands – so expect a production car to arrive within the next couple of years.

Welcome to our Geneva Motor Show hub page, scroll down for all our Geneva content...
Kia to launch seven new dedicated electric cars by 2027