Kia has lofty ambitions for its new supermini, on sale now in the UK. We've got all the prices and engine details right here. 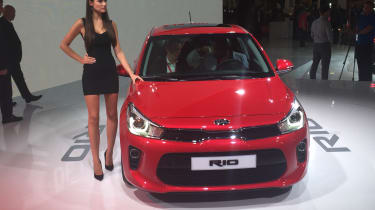 Kia has revealed full prices and specs for its all-new Rio – a new Ford Fiesta and Volkswagen Polo rival introduced at the 2016 Paris Motor Show.

On sale from today, the new Rio starts at £11,995 – a minor price rise over the starting price of the old model – and the new model introduces fresh engines, design and technology in an attempt to muscle in on the lucrative supermini market sector.

Entry-level Grade 1 cars get air conditioning and front electric windows as standard, plus a 3.8-inch display screen, Bluetooth and daytime LED running lights. Hill-start assist is bundled in as well.

Grade 2 cars are priced from £13,745, including 15-inch alloy wheels, electric windows all round plus a 5-inch colour infotainment display. It complements the reversing camera, which itself is bundled with rear parking sensors. A leather trimmed steering wheel and gearstick spice up the cabin, while more assists such as Autonomous Emergency Braking and Lane Departure Warning are included.

The overall design isn’t a radical departure from the look of the outgoing Rio, but the new model has visibly smoother surfaces and sharper details. Kia’s trademark ‘tiger nose’ grille is thinner and shorter, and flanked by a set of reshaped headlights, which also feature a new U-shaped LED lighting signature. 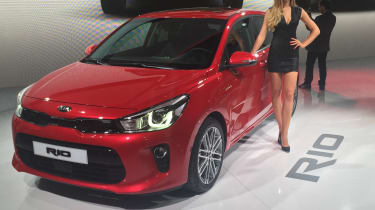 Changes are less evident around the back, but new rear lights feature an arrow-shaped LED light signature. The rear overhang is also shorter, while the more upright rear windscreen gives an increased sense of size. The new Rio won't be available as a three-door model either - a more practical five-door is the only option.

Kia Europe design chief Gregory Guillaume said: “It has reached a point where it can be a bit more mature in the impression it gives. The previous Rio was trying to grab your attention. Now the car is more self-confident in its proportions.”

In terms of engines, the highlight of the new Rio range is Kia’s 1.0-litre three-cylinder petrol turbo, which made its debut in the Cee’d.

Those in the market for a diesel can opt for a 1.4-litre unit, which comes with either 76bhp or 89bhp. Unsurprisingly these are the cleanest, with 80.7mpg and 92g/km CO2 claimed for the 76bhp version, alongside 74.3mpg and 98g/km CO2 for the more powerful 89bhp unit. 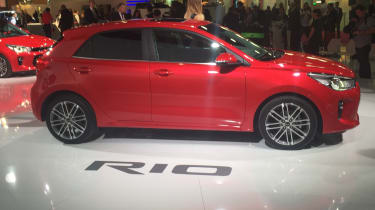 The drive is said to be much improved too, with a stiffer body shell and more compliant suspension likely to deliver more engaging handling. Insiders say the Ford Fiesta has been benchmarked for handling in the development process, while the Volkswagen Polo was benchmarked for comfort.

Michael Cole, chief operating officer of Kia Europe, acknowledged improving the drive was a key priority. He told Auto Express: “We are a good benchmark on design and a pretty good benchmark on quality. Where we are probably not seen in the industry as a benchmark is in the driving experience. So yes it is an area where we want to be number one.”

Kia is also making some bold claims regarding the new car’s practicality. The rear seats are said to be the most spacious in the class – and when we tried them out, there was certainly adequate room for a six-footer. With a wheelbase that is 10mm longer than its predecessor’s and a body that is 15mm longer, there is more space all round, with legroom increased in the front and rear. Boot space is 325 litres – greater than the Ford Fiesta (290 litres) and VW Polo (280), but behind the Skoda Fabia (330). 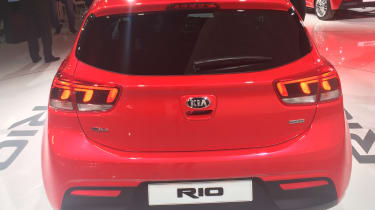 Kia has made safety a focus of the new Rio, with a five-star Euro NCAP crash test rating in the company’s sights. It will be aided in its quest by the fitting of an Autonomous Emergency Braking system with pedestrian recognition – a first for a supermini, though it doesn't come as standard on entry level cars. The system uses radar to detect potential collisions with pedestrians and bring the car to a halt. A Lane Departure Warning System is also fitted.

The Rio’s tech package includes both Android Auto and Apple CarPlay, with a ‘floating’ five-inch touchscreen at the centre of its infotainment system. And buyers will have the option of specifying Kia’s latest nav system, Connected Services, which is powered by TomTom and includes live traffic updates and speed camera alerts. A six-speaker audio system and USB ports front and rear are also fitted.

The model is hugely important for Kia as the company’s global best seller - more than 473,000 found homes across the world in 2015.

• New Kia SUV on the way

However, those hoping for a hot GT model may well have their hopes dashed. Michael Cole told us: ““It’s not in the plans right now. What we are likely to see would be something like a GT-Line, with the styling of a GT. That’s not confirmed but it is a likely step. After that we might consider it, but at this stage we have no plans.”

What do you think of the new Kia Rio? Let us know in the comments below...

Welcome to our Paris Motor Show hub page. Scroll down for all our Paris content...
New 2020 Kia Rio facelift on sale now from £13,995 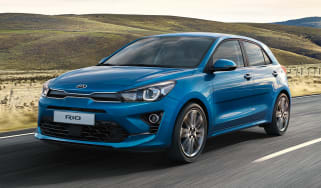 The Kia Rio supermini has been updated with a fresh engine range, some new tech and a few design changes
New Toyota GR Corolla nameplate trademarked ahead of 2023 release