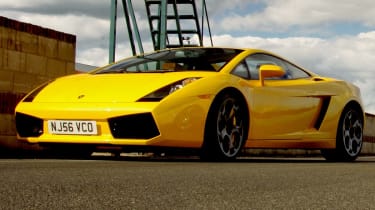 The Lamborghini Gallardo is no more, after the final model rolled off the production line at the manufacturer's Sant’Agata plant in Bolognese. The Gallardo had been on sale for 10 years, with 14,022 models being produced in that time – making it the most successful model to come from the Italian supercar manufacturer.

First introduced at the Geneva Motor Show in 2003, the Gallardo marked the 40th anniversary of Lamborghini and in those 10 years we’ve seen an astonishing 35 variants of the Gallardo.

The original Gallardo was powered by a 513bhp 5.0-litre V10 engine and within two years of its launch, the first special edition had been unveiled. The Gallardo SE debuted at the Frankfurt Motor Show in 2005 and was limited to just 250 models, it was so popular in fact, all models had sold before any of them had been produced. Changes to the SE included a power boost to 520bhp, a redesigned roof and a new-look interior.

In the same year, the first Gallardo Spyder joined the range, which was followed by the Superlegerra in 2007. This was the first in a long line of stripped out and hunkered down Gallardo supercars, which seen an increase in power from the V10 engine and extensive use of carbon fibre to reduce weight.

In 2008, a restyled and updated second-generation Gallardo LP560-4 was revealed at the Geneva Motor Show. It was also fitted with a new direct-injection 5.2-litre V10 engine developing 552bhp and was later followed by a Spyder, lightweight Superleggera and high-performance Spyder Performante versions, with the latter developing 562bhp – this was also the last Gallardo to be produced at the Sant’Agata plant.

Next year, the eagerly-awaited replacement for the Gallardo will be unveiled, likely to be called the Cabrera. It should have close to 600bhp from Lamborghini’s latest version of the 5.2-litre V10 and will share its underpinnings with the next-gen Audi R8 due in 2015. Until then, we’ve put together a gallery of all Gallardo models to have ever been produced – with a few exceptions due to images issues. Let us know which is your favourite in the comment section below.