We visit Lamborghini factory in Italy to discover the new Lamborghini Huracan LP 610-4, which packs a 601bhp V10 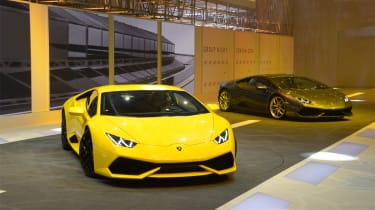 In its first forty years of trading Lamborghini produced a total of 10,000 cars, in the last 11 years it’s sold double that. That’s largely down to its most successful model ever, the Gallardo, which shifted over 14,000 units in nine years, and there are even higher hopes for the its successor, the all-new Lamborghini Huracan LP 610-4.

It has made its debuts at the Geneva show, and although official deliveries don’t begin until the summer we had the chance to visit Lamborghini’s factory in Sant’Agata Bolgnese to explore the car in the metal and get the full story from the men behind its development.

We also know the price is expected to be around £188,000 – roughly £30,000 more than the Gallardo LP560-4, £10,000 more than the Ferrari 458 and £7,000 less than the McLaren 650S Coupe. But what are the innovations behind these numbers? We’ve broken the Huracan’s most significant technologies down into easily digestible sections, below. 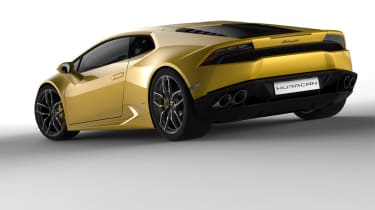 At the heart of the Huracan is a hybrid chassis that will be shared with the new Audi R8, due next year. Developed by fusing Audi’s expertise in aluminium and Lamborghini’s knowledge of carbon fibre, it uses a rear bulkhead and transmission tunnel made from resin transfer mould (RTM) carbon-fibre, while the rest is an aluminium space frame. The two materials are connected with glue and rivets and the result is a body that weighs 10 per cent less than the Gallardo, but is 50 per cent stiffer.

The ANIMA button (translates as ‘soul’ in Italian) on the bottom of the steering wheel can select one of three driving modes, much like Ferrari’s Manettino dial. Each tailors the engine mapping, exhaust sound, gearbox, dynamic steering, four-wheel drive system and adaptive magneto-rheological dampers. An innovative new system called LPI, or inertial platform, uses several accelerometers and gyroscopes placed at the car’s centre of gravity to update and prime the steering, gearbox, four-wheel drive system and ESC for optimum reactions at all times.

The focal point for the interior is the steering wheel, where you’ll find an indicator switch, washer and wiper controls, a button for the high-beam headlights and a switch to toggle you through the three driving modes – Strada, Sport and Corsa. Behind the wheel is a pair of much larger paddles, and behind those is a 12.3-inch digital display. This can be customised with a choice of three-layouts – a large rev counter in the centre, a rev counter to one wide with infotainment and maps next to it, or infotainment and maps across the entire screen.

The Gallardo’s most obvious sign of its advancing age was its jerky automated-manual e-gear system. It’s all change for the Huracan, though, which uses a new seven-speed dual-clutch auto mounted behind the V10 engine and branded Lamborghini Doppia Frizione (LDF). Lamborghini claims it enables “virtually imperceptible gearshifts without any interruption in torque” – to you and I that means smoother progress in auto mode and faster shifts in manual mode. A clever feature allows you to hold the left hand paddle as you’re braking hard for the next corner, and automatically selects the lowest gear possible for maximum acceleration out the other side. 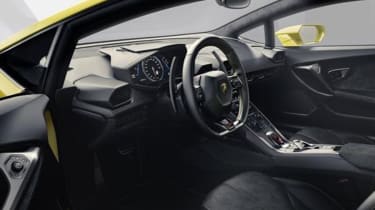 Unlike the Gallardo’s four-wheel drive system, which featured a viscous coupling, the Huracan employs an electronically controlled and hydraulically-actuated multi-plate clutch to distribute torque between the two axles. In normal circumstances it sends 30 per cent to the front and 70 per cent to the rear, but if needs be it can now send up to 50 per cent to the front and up to 100 per cent to the rear. To split power between the two rear tyres, there’s a mechanical locking differential, too. Lamborghini refuse to confirm whether rear-wheel drive derivatives of the Huracan will follow later in its lifecycle, but Dr Ulrich Hackenberg, Audi’s development chief confirmed that the new chassis is capable of running in two-wheel drive configuration.

The Huracan’s electromechanical steering is fitted with a variable ratio system called Dynamic Steer. It adjusts the steering ratio according to the speed your travelling at and the driving mode you’ve selected. For example, at low speeds a small turn of the wheel has a large effect on the front wheels, improving low-speed manoeuvrability, whereas at higher speed the ratio is reduced for smoother more progressive reactions.

A development of the Gallardo’s naturally-aspirated 5.2-litre V10, the new engine now produces 602bhp and 560Nm of torque, 75 per cent of which is available from just 1,000rpm, with a redline of 8,250rpm. The addition of stop-start and a new dual fuel injection system means fuel economy and CO2 emissions have been cut by around 11 per cent to 23mpg and 290g/km. Lamborghini CEO Stefan Winkelmann has ruled out a second V8-powered Huracan derivative – like its sister car the Audi R8 – calling this strictly a “one-car, one-engine” line-up.

Carbon-ceramic brakes are fitted as standard, with 380mm discs at the front and 356mm discs at the rear. Deploy them fully at 62mph and it takes 31.9m to come to a standstill – 1.1m less than the Gallardo. The tyres are Pirelli P-Zeros, wrapped around 20-inch wheels, and developed especially for the Huracan to strike the best balance between comfort and performance.

Our German sister site Auto Bild has managed to record a sound clip of the new car, which you can hear in the video below.

The latest official pictures show that the overall silhouette isn’t too much of a departure from the Gallardo it replaces, while the front end takes its inspiration from the Aventador. A ‘flying’ C-pillar and huge intakes in the side sills help engine and brake cooling, but also add drama to the rear quarter. Quad exhausts and slim rear lights emphasise the car's incredibly low and wide stance.

The interior appears to pick up the aeronautical theme from the Aventador with a digital instrument cluster and a fighter-jet-inspired starter button, hidden underneath a flip-up cover.

A convertible Huracan Spyder will join the range after the coupe has been launched. For the Gallardo, launched in 2003, we were made to wait three years before the Spyder arrived, but this time around expect Lamborghini to speed things up. An on sale date sometime in 2015 is predicted - around 12 months after the coupe.

The engine will mirror the coupe, so expect a revised 5.2-litre V10 with around 600bhp and a choice of two and four-wheel drive. Unusually for a drop-top, the Gallardo Spyder weighed no more than the coupe, and the same is expected of the new model.