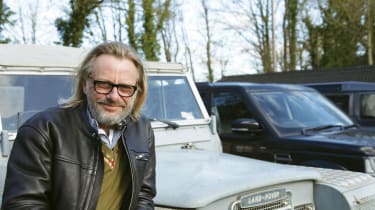 Did you grow up with Land Rovers?

I should have as my father was in the military and he absolutely loved them, but if truth be told, I actually grew up in a Morris van. My first Land Rover experience occurred in Norfolk when I was 12 years old. We were on a rabbit shoot and I had a little 410 shotgun. Being the youngest I was chucked in to the back and I remember to this day how I was thrown about as we drove across the fields and along muddy tracks. I absolutely loved it. I cannot tell you why but that passion has stayed with me and just grown. Obviously my first love is motorcycles but Land Rovers are right up there. As you can see I have several of them around the yard.

Your passion for motorcycles can be attributed to your Uncle Dick “Red Beard” Gladstone. Explain this.

I’ve always had this love of British craftsmanship and manufacturing. My Uncle Dick “Red Beard” Gladstone lived his eccentric bachelor life in a rambling old house in Liverpool, it was slowly being encroached by modern developments. At the age of eight I spent a night there and my bike-bonkers uncle showed me his massive cobweb-covered shed. In it were a load of BSAs, Triumphs and even a Douglas Dragonfly. There was also some dusty 18th century furniture. About three days later I came to the realisation that I too was into motorcycles and rural traditional British industry. I just have an amateur passion for it and I learn as I go along. As a result of that now I have a several sheds full of motorcycles and other rubbish. It must be so awful being over 40 and not having a passion. They say that men think about sex every minute, I think about classic bikes every minute.

How did you get into Land Rover ownership?

I’ve always hankered after the dream to own a Land Rover. After leaving school I was London based until I reached the age of 40, where sports cars and motorcycles ruled my life. Though I always said to myself that the minute I move into the countryside I will own a Land Rover [a quick survey of the property shows several Land Rovers all belonging to Henry].What do you love about Land Rovers?What I love about Land Rovers is that when you are driving one on the road, you get the same feeling that you do when you are on a motorcycle; this is the same the world over. You are in a vehicle that people appreciate and you are not offending anyone. If you’re driving a Lamborghini people think you’re a bit of a dick even before they meet you. I might be holding up the traffic when I am in my Series III but no one really cares. 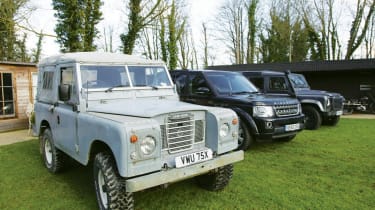 Your Series III is your Land Rover pride and joy...

I really wanted a Series I but I could not afford it. Who can these days? This Series III was on eBay and I fell in love with it instantly. It was up for £1800. Yes it has had a little lift and BF Goodrich tyres but the rest is all standard. I rang the owner in Farnham, Surrey and told him that if he can drive it here and it makes it, I will give him what he wants for it. Obviously it did. That was ten years ago.

What do you use your Series III for?

In the summer I put six kids in the back and three adults in the front of it and we head off to the pub in it. Those are the magical times. I don’t know what is right or wrong about them and where the lights should go. I just have mine and I love it. When you’re driving a Land Rover it’s not about getting to a destination; it’s about enjoying the journey. It’s the same on an old British bike except the chances are you aren’t going to get to your destination. Tell us about this other Series III in your yard that you will be featuring in a future episode of Shed and Buried.It needs a bit of welding and I suck at welding. My co-presenter on Shed and Buried and world-renowned classic motorcycle restorer Sam Lovegrove has said that he will teach me. I don’t know why its previous owner did a LPG conversion on it because you’re not exactly going to go to Venezuela in it are you? You will use only it for a bit of off-roading and trundling about in. This is a fun vehicle. Petrol is as cheap as chips and so we disconnected the LPG and it now runs beautifully. So, in the next few weeks we will fix it up and then sell it on the show.

You also love your Range Rovers?

Weirdly I’ve owned a lot of Range Rovers and the first one of those was a new G-reg Vogue in Ardennes Green. I had it as a company car and we used as a camera truck. Today we are still using Land Rovers as our camera trucks.

We see that you are currently using a new Discovery 4 for film work. Why?

It all comes down to the split tailgate. We have a need for being able to track and film motorcycles and you won’t find a better vehicle to do it in than a Discovery 4. The first time we used a Discovery was while filming the World’s Greatest Motorcycle Rides in South Africa while crossing the Kalahari. It was then that we realised just how great they are. They are unstoppable off-road, they are spacious, and in fact it feels almost sacrilege when we use them as camera trucks because they are so luxurious. Plus the cameraman feels pretty secure in them. 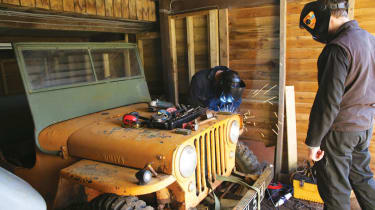 Have you modified the Discovery 4 that you use for shooting your TV stuff?

Not at all. The only adaption is who is driving it. When we do the World’s Greatest Motorcycle Rides I’m only a short distance away from its rear bumper. So you need to trust the driver. I know if a camel runs out in the road he will hit the camel and not swerve and hit me. I trust him with my life, I know that whatever happens I’m not going to be killed by the Discovery 4.

Is your Discovery 4 a future classic?

I worry about any car that is built in a society which is laptop based. Will they really actually become iconic? I don’t know. You and I wont be around to find out. Plus there are so many older, affordable Land Rovers about like your Discovery 2. My Norton Nobby racer is one of only 50 produced it and I waited two and a half years for it. I was with Ben Walker from Bonhams the other day and I asked him if he thought it was a good investment. He replied that we wouldn’t be around long enough to find out. It might make my kids happy or else they might say, 'Dad why on earth did you buy that rubbish?'

Your thoughts on the end of Defender production?

I’m gutted they’ve stopped production. It’s a double-edged sword really. Is progress good? If you were buying a new Toyota and they discontinued that model, who cares? If one is a curator of such an iconic brand I feel that perhaps the financial parameters should’ve been looked at again. Maybe they could’ve carried on producing them in lesser numbers with a partner? It isn’t all bad. I have a new Defender and a Series III and there are still plenty of them around.

My love of British motorcycles came to a head about four years ago when things were going pretty well with all of the TV stuff I was doing. I wanted to start a company that hand built the best British bobber custom bikes and Gladstone Motorcycles was born. Remember that after the war nobody could afford to buy new motorcycles and so they purchased the old military bikes and chopped off all the extra weight. That was known as bobbing them. These bikes were for go and not for show. That cool look became a very specific style. Everything that we do at Gladstone has its resonance in the fifties. Everything that we have built so far we have sold, and they go for £30,000. The key thing for us is even though our bikes look cool they have to be able to work and perform, so they are very much like Land Rovers. The function has been harder to achieve than the form, in fact it has taken us three and a half years to get it to an acceptable level. If you get on one of our bikes you can hammer it and it will handle. 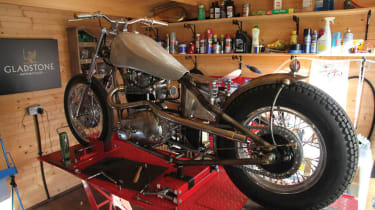 You are doing something you are pretty passionate about: bikes and sheds...

Shed and Buried works well because we are doing what we love. If the programme did not exist we would be doing it anyway except now we have a camera crew with us. Every day I wake up with huge gratitude that I can do what I do. It has been pretty tough getting here, convincing producers that something is right and will work takes time. I presented my first show in 1995, so it has taken me over 20 years to get here.

Are there any similarities between riding a British bike and driving an old Land Rover?

A Land Rover is the closest you get to motorcycling on four wheels. The share a similar passion, camaraderie, mechanical simplicity and soul. Both on and off-road. All the things that British bikers love about motorcycling, well I have the same feelings towards an old Land Rover.

The biggest difference is that with motorcycling you are part of the environment. You feel the rain and smell the world. While in a car I believe you are a spectator. In a Land Rover if it's too hot you turn on the air con – if it works, and if you want a wine gum you can get one.

They say that there is no such thing as an old war photographer. Is that why you got out of that game?

There are old war photographers. My friend Sebastian Rich has been doing it since he was 16 and he is 61 now. He has seen more war than any soldier and has been shot many times and survived. I got into the game because of the adrenalin rush and need for action and danger. Later on I realised that I don’t want to film suffering. Are we saving lives by filming the death of others or are we making things worse? I’m no political animal, nor did I want to be there anymore, so I just quit after Sarajevo. They used to call the film crew vultures there.

The key is to ask for help from someone in the industry you are trying to break into. Pick up the phone and make an appointment to see someone who can help you. Be persistent and smart. You also need to ask yourself if this is really what you want? If you want it above anything else, then you will get it. The other thing is don’t worry about qualifications. In my business they are meaningless.  When I started out in TV I did not care about the money, I was living on someone’s floor in London, all I wanted was to make documentaries and be involved in TV.