Land Rover's flagship model gets a new diesel engine and gearbox – is it the best yet? 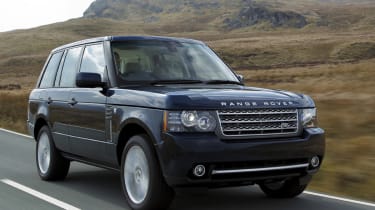 With this new turbodiesel engine and eight-speed gearbox, Range Rover engineers have significantly improved an already impressive car. This latest model is fast but it’s also surprisingly frugal – especially when you consider it weighs almost three tonnes – and relatively clean too. As ever, it’s beautifully built, soothingly comfortable and boasts incredible ability off-road. If you’ve got the required funds, luxury 4x4s don’t come any better.

It’s party time at Range Rover! Fresh from the launch of the Evoque, the famous British 4x4 brand is continuing its 40th birthday celebrations with this – the 2011 model year Range Rover. And Auto Express has driven it.

While just some new lights and a fresh set of grilles and vents are the extent of the exterior tweaks, the world’s best luxury off-roader has received some huge changes under the skin aimed at improving performance but reducing thirst.

The new unit uses one large turbo to do the majority of the work, with a smaller turbo cutting in to provide extra assistance. The sequential system, combined with the new gearbox, results in a 20 percent improvement in fuel economy – up to 30.1mpg – and a 15 percent drop in CO2, to 253g/km, removing the Range Rover from the top tax band.

Apart from the gear selector, up front it’s pretty much identical to the current car, but in the back there’s an increased focus on luxury with extras such as a 1200watt 19-speaker Harman Kardon stereo.

On the move, the 2011 Range Rover feels majestic. The new engine offers a lovely low V8 rumble and provides deep-chested performance while the eight-speed automatic always finds the right gear, shifting smoothly and quickly. With 700Nm of torque, it’s particularly impressive going from cruising to motorway speed, accelerating from 50-75mph in just 5.1 seconds.

For some tastes, the steering could do with a touch more weight and the rotary gear selector is perhaps not as easy or as pleasurable to use as a traditional lever. But that’s about it for criticisms.