The new McLaren 600LT Spider is the latest addition to the Sports Series range, while the optional MSO Clubsport Pack cuts 100kg of weight 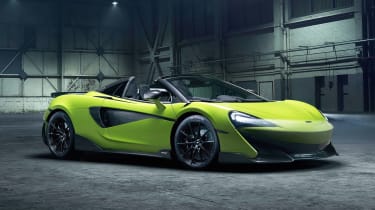 This is the McLaren 600LT Spider. A lighter and more powerful version of the 570S Spider on which it’s based, the track-focused model is available to order now priced from £201,500 - £16,000 more than the coupe.

The 600LT Spider shares all its mechanical running gear with the coupe equivalent; it’s powered by the 3.8-litre twin-turbocharged V8 from the 570S Spider, but tuned so it now produces 592bhp and 620Nm of torque.

Power is fed through a seven-speed dual-clutch gearbox and McLaren claims the 0-62mph sprint is dealt with in 2.9 seconds. Top speed stands at 201mph with the roof raised, or 196mph with it stowed. 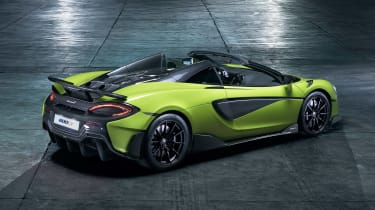 As with the 570S Spider, the 600LT Spider’s tub is a carbon-fibre monocoque; this means McLaren hasn’t had to add the strengthening commonly associated with convertibles, so the car weighs just 50kg more than the Coupe.

The powered roof can operate at speeds of up to 25mph, and there’s a separate wind deflector designed to minimise the turbulence in the cabin when it’s open to the elements.

Further helping the 600LT Spider’s acceleration is a 100kg reduction in weight over the standard 570S if you specify the optional MSO Clubsport Pack, priced at £18,200. This includes carbon-fibre race seats, titanium wheel bolts and a host of carbon-fibre interior and exterior parts. Other possible weight-shaving options include the deletion of both the in-car audio set-up and the air-conditioning.

The 600LT Spider is the sixth model in McLaren’s Sports Series. It’s designed to sit alongside the 600LT hard-top in a range that also includes the 570S Spider and Coupe, the 570GT and the 540C.

As with the 600LT Coupe, the 600LT Spider will be hand-assembled in limited numbers over the course of 12 months at the McLaren Production centre in Woking, Surrey. Production will start in March, with the first deliveries expected in the second quarter of 2019.

Click here for our old vs new head-to-head between the McLaren 12C Spider and the McLaren Senna...