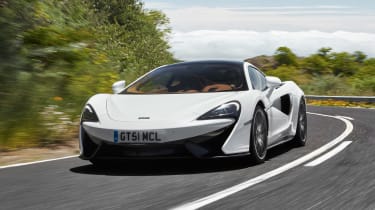 McLaren is still a relative newcomer to the supercar market’s mainstream, but it feels strange to say that today given the brand’s rapid rise to a position of prominence. The engineering marvel that was the McLaren F1 can claim to have singlehandedly laid the foundations of the hypercar sector back in the 1990s, but it was the arrival of the MP4-12C in 2011 that first signposted Mclaren’s ambition to be mentioned in the same breath as bigger volume performance brands like Ferrari, Lamborghini and Porsche.

The McLaren 570GT might just go down as another milestone in McLaren’s transformation from racing team to builder of low volume hypercars. The significance of the GT is that it’s McLaren’s first real stab at a more road-biased supercar, the type of model that you can, theoretically, use every day. Within the ultra-exclusive realm of the supercar sector, that’s where the sales volume and money is. It’s something Porsche has been ably demonstrating with its 911 Turbo for years, and McLaren is looking to take a piece of that pie. 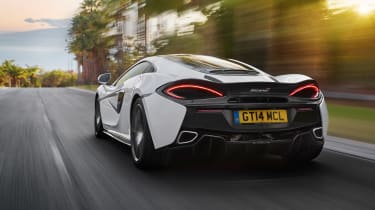 The 570GT falls within the McLaren Sports Series range, positioned alongside sister cars the 540C and 570S. Above that you have the Super Series shelf consisting of the 675LT and 720S, while the Ultimate Series is where the P1 hypercar resides. Of all these current cars, and all other previous McLaren models, the 570 GT is designed to be the most comfortable and refined for road use. The brand even designed-in a (little) bit of practicality too.

The engine is McLaren’s 3.8-litre twin-turbo V8, it’s mounted in the middle and sends its power to the rear wheels through a seven-speed automated manual gearbox. That gearbox is adjustable across three modes, as are the adaptive dampers in the specially-developed suspension system.

The key visual change that marks the 570GT out from its Sports Series stablemates is the revised glass house that flows gently down to the rear of the car making way for an additional luggage compartment under a side-opening glass hatch.

Key rivals to the 570GT include the Audi R8, Lamborghini Huracan, Bentley Continental GT and more powerful versions of the Porsche 911.

McLaren has stylishly achieved its aim of making a Sports Series model that’s more suitable for longer trips and daily use. Yet despite the extra comfort and practicality, the McLaren 570GT loses little of the capability and poise of the stock 570S supercar. Performance remains breathtaking but this is a car that opens up the prospect of McLaren ownership to a new kind of buyer.

This might be the most road-biased McLaren ever but it’s still a McLaren – and devastatingly capable as a result.

When McLaren tells us that it’s built the 570GT to be its most refined and luxurious car to date, it’s important to remember that’s coming from a company with motorsport permeating every facet of its make-up. The GT is no softy. 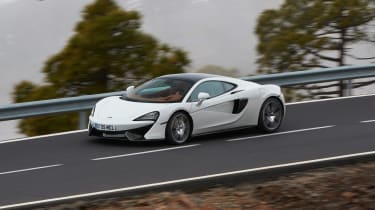 Compared to the 570S, the suspension spring rate stiffness is reduced by 15 per cent at the front and 10 per cent at the rear. You then have further scope to adjust the ride through the Normal, Sport and Track modes on the adaptive dampers. The steering has also been revised with a 2 per cent reduction in its ratio, to take the edge off its responses and help smooth driver inputs.

In practice this is a car that with breathtaking performance (0-60mph in 3.3s and a top speed of 204mph) that manages to make you forget the snarling aggression it’s capable off. You never get the sense it’s straining to be let off the leash when cruising on the motorway or tackling urban traffic.

For a fully-fledged supercar, the ride is so good that it’s easy to forget the need to steer around larger road imperfections (they’ll still send a jolt through the cabin) and tiptoe over speed humps (the nose lift function is a must around town). Motorway expansion joints that feel like torture in a firmly sprung hot hatch are dispatched smoothly, with minimal noise from the suspension and specially developed Pirelli P Zero tyres.

And yet the 570GT has only lost a fraction of the sharpness that characterises the 570S on which it is based. The steering is a little more languid but the car feels balanced and hugely confidence inspiring in fast corners. There’s no trick four-wheel drive system, but the rear wheels effortlessly handle the power on tight exits.

Braking performance is similarly impressive but the pedal requires quite a stomp to extract a strong response. There’s plenty of feel but it seems slightly at odds with the car’s other control weights. And a more charismatic engine note would really add to the experience.

This is possibly the biggest criticism of the 570GT and it’s one that McLaren is no stranger to. For all the engine’s verve, it’s somewhat tuneless compared to a Ferrari V8 or Audi V10, especially in the upper reaches of the rev range. That takes some drama away when, let’s face it, drama is what you really want. That said, we’re still faced with a seductive mix of qualities that make the 570GT one of the best options there is for people who want to do a lot of mileage in their supercar. 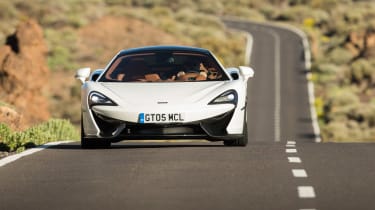 Lightweight design and cutting-edge aerodynamics help towards better economy than you might expect.

Officially, the 570GT returns 26.6mpg on the NEDC combined cycle with CO2 emissions of 249g/km. In practice we found that the car will get very close to and often exceed that mark, with close to 30mpg possible on a careful motorway run. It’s an impressive showing that helps to make supercar ownership a little more financially palatable – and boosts the car’s grand touring credentials with the 72-litre tank giving a good potential range.

Partial credit for the strong efficiency of the 570GT must partly go to the MonoCell II carbonfibre tub that underpins this and all the McLaren Sports Series range. It contributes just 75kg to the car’s modest 1,350kg dry weight.

The car also boasts an advanced aerodynamic package with an extended rear spoiler – 10mm higher than the one on the 570S – to counteract the effect on airflow of the GT’s reworked glasshouse. While the finely honed aero does it’s work at speed, urban efficiency is aided by the standard stop-start system that turns the engine off in traffic to save fuel.

Insurance for the McLaren 570GT is in group 50 but that’s pretty much par for the course in the supercar segment.

Thanks to the glass hatch at the rear of the cabin, this is technically a three-door McLaren but the exterior styling isn’t a radical departure from the rest of the Sport Series family, or McLaren’s other recent road car efforts. 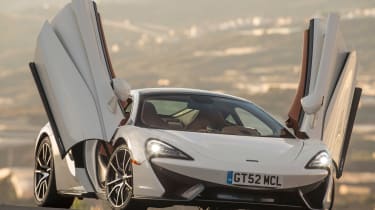 There's a shark-like front end with a low, sculpted front spoiler design that curves up at the edges to meet the trademark headlights, while at the rear the flying buttresses of the 570S are removed to make way for the glass shelled luggage compartment behind the seats. The enlarged spoiler sits above menacing rear lights and the twin exhaust emerges either side of the large wattles of an aggressive-looking splitter.

The party-piece dihedral doors house deep cutaway sections for the intakes that feed the engine. Swinging them upwards reveals a leather-lined cabin that can be specified in Sport or Luxury configurations. Either way, it’s clean in its design but well built and has some eye-catching detailing.

The door interiors are particularly slick. Merging beautifully with the dashboard, they combine air vents, audio speakers, leather, and carbon fibre, in a curving design that again references the McLaren logo. The standard panoramic glass roof also enhances the environment, letting in loads of light and featuring a special SSF Sound and Solar film coating, together with an 18 per cent tint to deal with the glare.

There’s a simple digital read-out ahead of the driver that clearly presents all the key driving information. It’s viewed through the wonderfully tactile leather and carbon steering wheel with its big paddle shifters also picked out in carbon fibre. In the centre is a small, portrait-orientated touchscreen for the infotainment, sat-nav and climate controls. Below that are the switches for the transmission, traction control and the various driving modes. Aesthetically and in terms of the quality of the construction, the 570GT’s interior is very well executed.

If there’s a weak spot inside the 570GT it’s the central touchscreen and, more accurately, the software the drives it. The menu system houses controls for sat-nav, phone pairing, air-con and other systems, but the basic navigation takes quite a bit of getting used to. 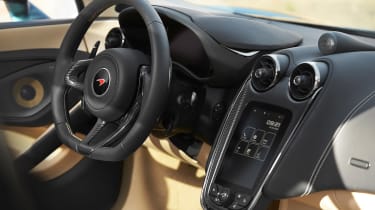 More of a problem, however, are the slow responses of the touchscreen and the regular delays while the software executes basic operations. We also found the navigation instructions were sometimes delivered without enough warning to safely make the required manoeuvre and the whole system appeared to crash on a couple of occasions, requiring a restart of the ignition.

There are no such problems with the sound quality. You get an eight-speaker McLaren Audio Plus system as standard but a 12-speaker Bowers & Wilkins set-up is available as an option. The finely sculpted speakers really add to the look of the cabin and have apparently been specially designed around the 570GT’s acoustics. They sound great.

McLaren aimed to deliver a car better suited to long distance travel and every day use with the 570GT. And although the styling and the performance of the 570S has been largely retained, the GT does manage to be a significantly more comfortable and practical car.

The doors swing up to reveal the low-slung seats, but they’re accessed more easily than in the S model thanks to a lower and narrower sill. The seats are heated and electrically adjustable and once you’re in them, there’s a good view out by supercar standards.

The way the bonnet bulges over the high front wheelarches gives useful points of reference for keeping the front wheels clear of kerbs, while the glass hatch provides a decent view to the rear. When you factor in the optional rear camera and all-round parking sensors, the 570GT is a friendly-feeling supercar you can use in town without giving yourself a heart attack. 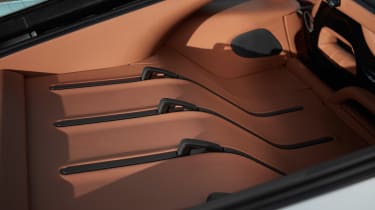 At 4,530mm long and 2,095mm wide, the 570GT is around 170mm wider than a Lamborghini Huracan. Partially because of this, the cabin certainly feels spacious for two occupants and that impression is enhanced by the extra light from the fixed glass roof.

Despite the addition of that glass roof, headroom is ample, even for taller drivers and passengers. There’s also plenty of adjustment in the steering column and seat, so a great driving position should be attainable for most.

The McLaren has a pair of luggage storage options with 150 litres available beneath the bonnet hatch and a further 220-litres under the glass hatch to the rear of the seats. In the front you’ll find a deep well, big enough for a couple of weekend bags and the space is probably going to be more useful for larger items that the ‘touring deck’ to the rear, which is shallower and not as uniformly shaped.

The McLaren 570GT did not feature in our 2019 Driver Power survey – it’s a niche machine that sells in relatively small numbers, much like most of its supercar rivals. Similarly, Euro NCAP has not crash-tested the 570GT due to its low-volume production numbers.

All McLaren 570GT models come with a three-year unlimited mileage warranty. There are options to extend the period of warranty cover too.

Servicing is required every 12 months or 10,000 miles, whichever comes first. 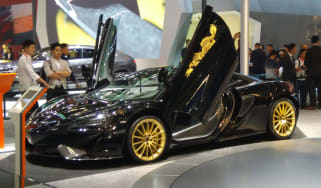 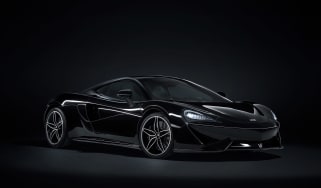 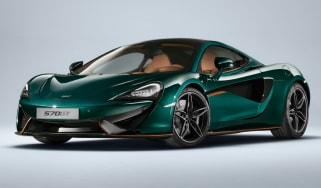 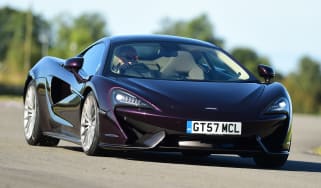 Does the stunning road-biased McLaren 570GT supercar make as much sense on British tarmac?
Visit/mclaren/570gt/96716/mclaren-570gt-by-mso-concept-to-debut-at-pebble-beach 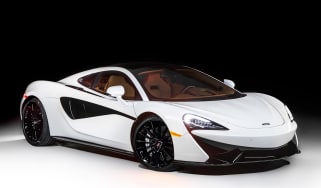 McLaren 570GT by MSO Concept to debut at Pebble Beach

McLaren 570GT gets the MSO treatment in this one-off concept car, designed to take advantage of the Californian sun
Skip to HeaderSkip to Content