Does the stunning road-biased McLaren 570GT supercar make as much sense on British tarmac? 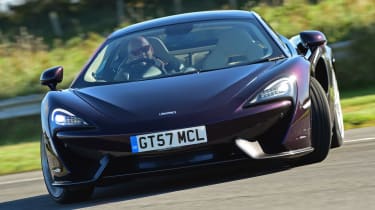 The 570GT isn’t simply a 570S with a GT badge slapped on the rear. It shares similar bodywork, but has been extensively reworked to offer a different driving experience. McLaren has shown its true skill and expertise in taking a hard-edged sports car and softening it to make it easier to live with, but no less desirable or exciting. This is the most convincing road-biased car McLaren has made, and it’s highly impressive.

The acronym GT is probably one of the most commonly used badges attached to the rear end of a car. Manufacturers think that by adding it to one of their humdrum models, it immediately gives an otherwise bland and boring car immediate street cred as a ‘grand tourer’.

McLaren has expanded its Sports Series line to three models with the new 570GT. But this is not simply a case of slapping a GT sticker to an existing car; far from it. It’s easily one of the finest models the British company builds and without doubt the best all-round sports car it has made to date. 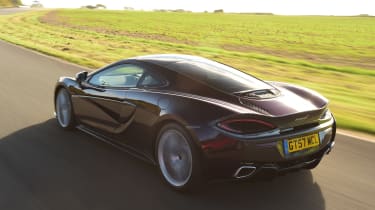 That’s quite a definitive statement, but one that’s easy to stand by. We were highly impressed with the 570GT when we first got behind the wheel in May, but now we’ve spent time with it on UK roads, it has confirmed our impressions. Essentially McLaren has taken the brilliant 570S and sobered it up a little to create a car that’s as civilised and refined as it can manage without adding a smaller engine and extra seats.

At a quick glance, the 570GT looks like the 570S, but there are some significant differences between them. The 570S’s flying buttresses have made way for more rounded bodywork that includes a side-hinged glass hatch. There’s a 220-litre boot under there, while the 570GT gets a new roof that’s mostly glass, bathing the cabin in more natural light. 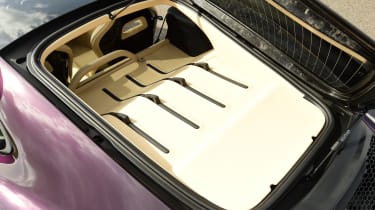 The engine, normally on show in the 570S, now lives under a leather-covered floor that’s well insulated, so any Fortnum & Mason food purchases aren’t cooked before you get home. Bespoke luggage can be ordered to fit the space, along with the front boot, and combined capacity is an impressive 350 litres; that’s more than you get in a Ford Focus hatch.

Inside the GT gets more soundproofing, electric heated seats with memory function, and soft-close doors, while under the skin a quieter exhaust system is fitted as standard and the suspension has been softened.

Spring rates have reduced stiffness by 15 per cent at the front and 10 per cent at the rear. The steering response rates have been made a little gentler, too. All of these tweaks and changes add up to a very different driving experience. The softer suspension is immediately noticeable – there’s a little more cushioning when thumping over potholes – and there’s less booming on the motorway.

But that’s where the GT references stop – because when you’re not cruising around and attack the asphalt, this 570 goes, stops, sounds and looks like all other McLarens. While the steering is a little slower than the 570S’s, there’s little difference: it’s direct, still alive with feedback and responds immediately to inputs, with the only real difference being the GT’s tendency to understeer slightly more under hard cornering than the 570S. 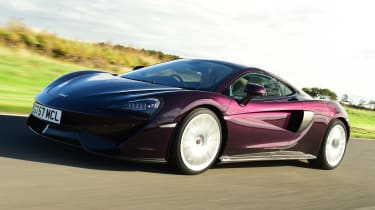 Press the starter button and the 3.8-litre twin-turbo V8 yelps into life. The acceleration is almost violent thanks to the 562bhp, and ‘clicking’ the paddle-mounted gearshifters is a real delight. The gearbox is not as quick as Audi’s S tronic or Porsche’s PDK, but it’s a tiny bit less responsive.

The GT is just two-tenths of a second slower than the S from 0-60mph, still clocking a mightily impressive 3.3 seconds, with the same 204mph top speed. That slower 0-60mph dash is due to it being 37kg heavier, but it’s a minimal penalty and in the real world the GT responds like the S. 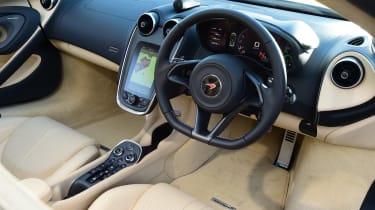 Despite the extra luxuries, the cabin remains essentially the same as in the 570S. It’s a masterpiece in modern sports car interior design and a far cry from the button-frenzied Ferrari 488 or functionality of a Porsche 911 Turbo. You sit low but upright in the 570GT, so visibility is great and it’s an easy, comfortable car to use every day.

The same can’t be said for McLaren’s infotainment system. Simple tasks like inputting a destination into the sat-nav can be hugely frustrating. But as this is a high-end sports car, such criticisms are trivial.

While the changes from S to GT could be seen as relatively minor, they make a significant difference to the driving experience. McLaren has built a car that’s as serene as a McLaren can be, while losing none of the drama or desirability.