Just six years separate the 12C Spider and Senna, but the latter shows just how far McLaren has come 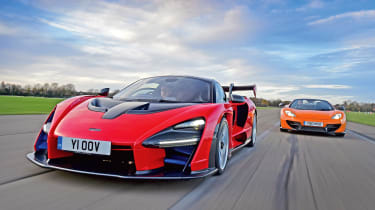 The two McLarens we’ve assembled don’t fit our ’88 to ’18 rule, but if we’d tried to source a McLaren from the year Auto Express was first published we’d have been asking for Ayrton Senna’s Formula One car to go with the firm’s latest hypercar that bears his name. In fact, alongside Woking’s latest and greatest creation is a 12C Spider, the open-top version of the first supercar under the McLaren Automotive banner,that came into being back in 2010.

In just a handful of years the contrast between the two models shows how far the firm has evolved and why this level of agility in an organisation that’s used to ultra-quick development in F1 has helped it progress so rapidly and challenge (and beat in some cases) the likes of Ferrari, Lamborghini and Porsche.

The 12C was designed around a carbon- fibre MonoCell chassis. Even to this day, none of its competitors is using this tech in the supercar sector, and it allowed the logical progression to the 12C Spider without any real loss in structural rigidity and, therefore, performance. As a result, the Spider’s spec sheet looks thoroughly modern. Retracting the roof (it takes less than 17 seconds at up to 19mph) gives even better access to the gargling, bassy blare from the 3.8-litre twin-turbo V8 engine, which delivers 616bhp and 600Nm of torque. 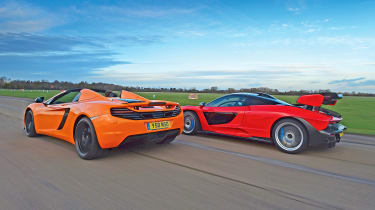 There’s a seven-speed dual-clutch auto gearbox that drives the rear wheels, and with launch control, the 0-62mph sprint takes 3.1 seconds. The 204mph top speed means it’s part of a still-rarefied club. Five years on it also still feels alarmingly fast. There’s a little turbo lag, but once the engine is on boost it positively hurls the McLaren at the horizon with genuine ferocity.

It’s only punctuated by the gearshifts, and it’s here you realise how far technology has advanced. Upshifts are a bit more sluggish than in the most modern McLarens, while the downshift blip feels a little lethargic.

The steering is different, too. It has the same fluidity of motion and delightful weighting of modern McLarens, but it’s a little more mute in its communication with the driver. Of course, part of that could have been due to the winter tyres on our 12C Spider, but the steering did feel a little mushier and just a bit blunter compared with the stereo-quality chatter you get from a modern Mac.

By comparison, the £750,000 Senna is analogue, grainy in the detail it gives you, and raw. If the Spider feels fast, the Senna is devastatingly so. It’s perception-warpingly quick and forces you to rethink what’s possible from a car that wears number plates. Yet it shares elements of its DNA with the 12C, for the Coupé and Spider are ancestors that underscore the Senna’s existence.

The chassis has been advanced and refined to the point where this MonoCage III tub, with a structural roll hoop element unlike the 12C, is the strongest of any McLaren road car. Also developed is the suspension tech. The 12C had ProActive Chassis Control, which did away with conventional anti-roll bars, instead interconnecting the adaptive dampers hydraulically to control roll.

It gave the 12C a beautiful ride at the time, but the Senna shifts the focus with its RaceActive Chassis Control II system. It’s not as silky, but the damping is still charmingly plush and the ride in Comfort mode supple for a car that’s subject to enormous forces. 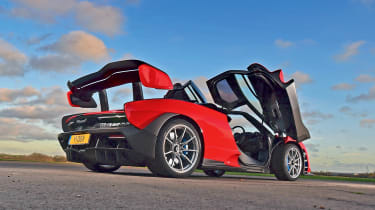 They’re generated by 789bhp and 800Nm of torque from a larger, fettled 4.0-litre version of the twin-turbo V8. It’s a ferocious engine that fizzes and buzzes at your back, complimented by the ‘tink’ of the stones flicking off the bottom of the barely soundproofed tub.

When it’s cold the Senna will wheelspin in second, third and fourth in a straight line. While the chassis is ultra-responsive and can feel a little flighty, the throttle connection is synaptically strong, so tiny accelerator adjustments refine the Senna’s attitude and angle of attack. 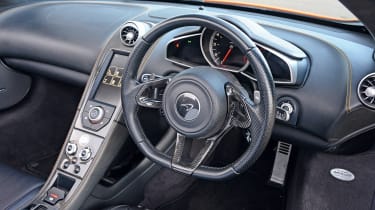 The box slices through ratios seamlessly and blips downshifts perfectly, the engine spinning up like a buzz saw. But the area that really grabs your attention is the brakes.

The Senna can pull 2.1g when you hit the pedal, with active aero helping slow the car. It leaves you straining against the six-point race harness. With a top speed of 208mph you’ll be glad of those stoppers, but the more important velocity figure is 155mph. At this speed the Senna’s body creates 800kg of downforce. As you up the pace you can feel the mass of air being worked as it rushes over the body, pushing the car’s 1,198kg dry weight into the road with a confidence-inspiring sense of solidity being fed back.

This is one area where McLaren has improved massively. The Senna might be an Ultimate Series machine, but it shows what’s possible. While it still has the potential to administer a venomous bite, get it right and this ultimate roadgoing performance car of 2018 is a shining symbol of progression over McLaren’s short history. 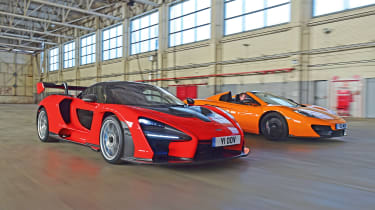 To evaluate McLaren’s future you have to look to its past – and one car in particular. The iconic McLaren F1 reset the supercar playing field and the company’s next model – the Speedtail – will supersede that car as the fastest McLaren ever, with a 250mph top speed. It pays homage to the F1 with its three-seater layout, while the 1,036bhp electrically assisted 4.0-litre twin-turbo V8 is a showcase for tech-laden McLarens of the future.