Despite their very different body styles, the Nissan Bluebird and Qashqai have proven big hits 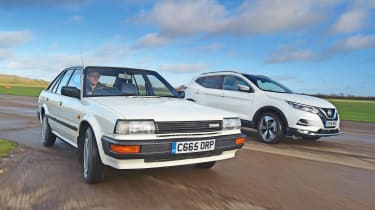 From the delightfully quaint and oh-so-Japanese way a mechanical bell chimes when you’ve left the lights on to the way the Nissan Bluebird starts on the key every time, the talent of the saloon and hatchback is arguably easier to appreciate now than it was when it was new, even though it looks like a standard family car.

While the T12 Bluebird model in our pictures was replaced by the later T27 version in 1987, so it strictly isn’t from 1988, this generation of Bluebird marked a significant step for Nissan. It was the first model to be built in the UK at the brand’s now famous and incredibly successful Sunderland plant.

Since then, the manufacturer has had an unbreakable connection with the British car industry and underpinned its success and the continued growth of the market here. 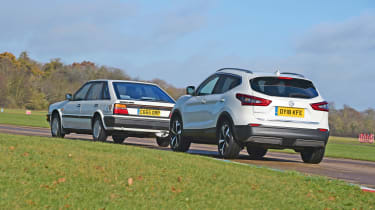 It’s fair to say when it was contemporary the Bluebird wasn’t exactly groundbreaking, but drive it today and the Nissan feels as solid as the moment it rolled off the production line – including the interior plastics.

The 84bhp 1.6-litre four-cylinder petrol engine is surprisingly quiet and just swift enough, while the gearchange has a level of mechanical precision that you might not have given the car credit for, looking at its unassuming, boxy exterior.

Although the suspension doesn’t exactly feel sophisticated, it does a half-decent job of smoothing out small to medium lumps and bumps; it’s only when loaded up in corners and travelling quickly that the Bluebird really feels less content. However, the power-assisted steering is light and makes the Nissan easy to manoeuvre. 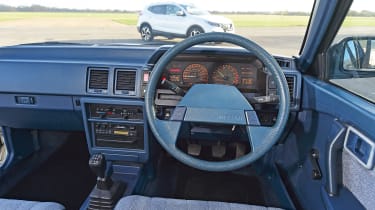 Its strengths lie inside. The cabin feels like it could survive a nuclear blast, and even though this example has only covered 71,544 miles, it’s showing very few signs of wear. Visibility is great, like many of the classics here, but you wouldn’t want to find out the consequences of those thin A-pillars in a crash. Safety has come a long way.

It’s spacious inside and the boot is massive for a car in this class from 1987. Also, it’s easy to access. Combined with its resistance to abuse, you can see why the Bluebird was so popular with cabbies and families.

But while a five-door hatch was the standard family fare 30 years ago, Nissan has been instrumental in shaping the kind of car a modern family wants now: an SUV.

The Qashqai was key to this. Nissan wasn’t first with an SUV, but it did it most convincingly at scale, with the Mk1 model popularising the genre at its launch back in 2006, before the Mk2 Qashqai picked up the baton in 2013 and continued to shape the sector.

A facelift later and it’s still as appealing as ever. Diesel power dominated, but with the change in political agenda petrol is now more popular again. There’s a range of engines to suit, and while the Bluebird and Qashqai are fairly bland and unremarkable to drive, where the modern family SUV differs is in its styling and the technology it offers – even relative to the eras both cars existed in.

The Qashqai features semi-autonomous driving tech, sat-nav and advanced phone connectivity, highlighting how mainstream models like this are closer to their luxury counterparts than ever. 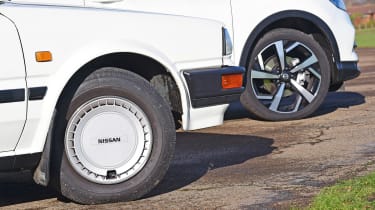 SUVs such as the Range Rover have always been the aspirational target, but Nissan democratised this slice of the high life at a fraction of the cost with the Qashqai. The second-generation version in particular offers sharp styling and was the first car to slake the thirst of punters desperate for an affordable but attractive off-roader.

Yet it doesn’t come at the expense of practicality. A 430-litre boot and roomy rear mean that, like the Bluebird, the Qashqai caters for a similar market today as its forebear did in the eighties. Only Nissan saw the way the class was evolving, stepped in and shaped the final direction it should take.

While it might not boast the glamour or luxury of some of the modern metal in this test, the Qashqai’s importance to the UK car market shouldn’t be underestimated. As we crowned it at the Auto Express New Car Awards back in the summer, the Nissan SUV is a worthy winner and stands tall as our Car of the Past 30 Years. 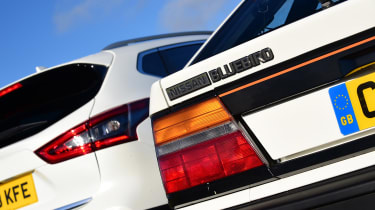 Nissan has carved itself out as an SUV brand. The Qashqai put it on the map, the Juke proved it wasn’t a one-hit wonder, while the updated Mk2 Qashqai in our test has helped to cement the company as part of the furniture.

Its future will still revolve heavily around the successful Sunderland manufacturing centre, with a new Juke to come that has the potential to be as radical as the original. That’s what we’re waiting for.

Qashqai Mk1: Our car of the past 30 years 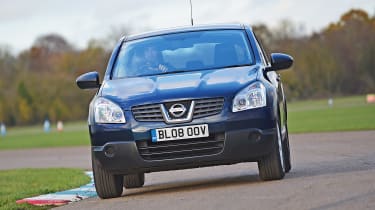 Many manufacturers claim to have launched the original SUV. It’s fair to say the Mk1 Nissan Qashqai wasn’t the creator of the segment, but it was the one that sent SUV popularity soaring.

Until 2006 when the Qashqai was launched, SUVs tended to be luxurious and expensive. But this Nissan delivered an upmarket image for own-brand prices, giving buyers exactly what they wanted. The raised driving position, practicality, safety and style were all elements that made this car a template for rivals looking to compete in this sector.

Just remember, this car replaced the Almera hatchback; the staid and tired family five-door had no chance compared with the groundbreaking concept that took its place in the range.

The Qashqai has become the company’s most successful European model, and it’s not hard to see why. The original Qashqai changed Nissan’s fortunes for the better.