With a 6.2-litre GM engine at its heart, the new 378 is arguably the best AC Cobra ever 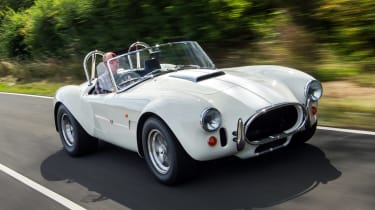 Easier to drive than any AC Cobra in history – and powered by a 6.2-litre GM engine rather than a Ford V8 – the 378 adds a touch of modernity to an endearing old-world sports car. Expensive, yes, but on the road it looks and sounds a million dollars.

The AC Cobra might not be the most obvious new sports car of 2018. But with a 6.2-litre General Motors V8 in its engine bay plus a whole host of other modifications, the ‘378’ you see here is quite unlike any other AC Cobra so far.

At £90,000 it’s not cheap, but then the moment you set eyes on the 378, the price almost becomes inconsequential. AC will only make around 40 cars a year and they will all find homes, we’re told. Deservingly so, if the quality of this pearl white test car is anything to go by.

Made in Port Elizabeth in South Africa, then exported globally in exclusive numbers, the 378 is a suitably high-end piece of machinery. Granted, its ladder frame chassis is rather rudimentary – and its multi-link front and rear suspension not exactly at the cutting edge – but the composite bodyshell is beautifully finished. As is the paint, with panel gaps as tight and consistent as any mass-produced modern supercar. 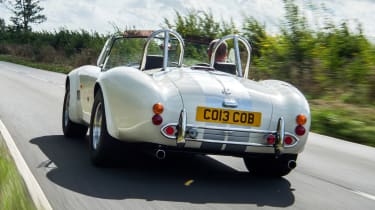 There’s more space inside the cabin, plus power steering to take the strain from your arms and shoulders. The 378 is the easiest Cobra in history to drive, with a clutch that’s equally un-macho in its weighting. The manual gearbox slices smoothly between its six forward ratios, too.

Purists will no doubt recoil at the fact it’s powered by a GM engine instead of a Ford V8, but the moment they drive the 378, most of them will surely agree it doesn’t matter which badge is on the rocker covers. Propulsion is strong and the soundtrack utterly soul-stirring.

The only mild disappointment is the sight that greets you when you lift the exquisitely finished bonnet. There’s a big, modern, rather cold looking black plastic cover on top of the engine – rather than eight silver induction trumpets pointing at the sky. Beyond this, however, there is much to admire about the 378.

It’s quick, too, with AC claiming 0-60mph in “under four seconds”, with 0-100mph in “less than 10 seconds”. Those are good numbers but, in reality, it feels faster than that. Consider the car weighs only a fraction over 1,100kg and, as you’d expect, it flies. 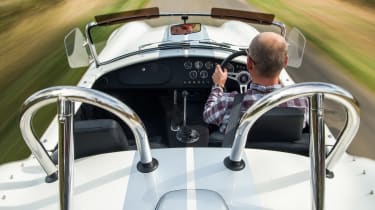 Put your foot down in any of the first four gears, and the 378 thunders forward with genuine muscle. Yet thanks to its fat rear tyres and a fairly soft rear suspension, traction is phenomenal – even when you nail it wide open in second gear. The noise it makes is perfectly in keeping with the Cobra nameplate, too.

As advertised, the new power steering is a welcome addition, even if it isn’t what you’d call seminal in its accuracy or response. Guide the 378 through a series of bends and, give or take an inch or two here and there, it goes pretty much where you want it to. The same is true of the handling; it’s tidy enough, with a surprisingly decent ride to go with it.

But the best thing about it is the way it looks. To all intents and purposes, the 378 appears identical to a Cobra of old; a modern day interpretation of what the original MkIV ‘427’ Cobra was like way back in the 1960s. It gets enthusiastic approval from just about anyone who enters its orbit.