The Fiesta XR2 was many an enthusiast’s fast Ford of choice back in 1988. 30 years on, the ST has picked up the mantle 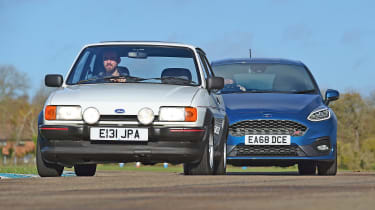 Ford might not be a British brand, but the manufacturer has had such a shaping hand on the British motor industry that we’ve accepted it as our own. The marque has topped the best-sellers list for decades, and no model represents this success better than the Fiesta.

With more than 40 years under its belt this superb supermini has mobilised a nation, from new drivers to commuters – but everyone loves a fast Ford, and there’s a rich legacy when it comes to racier Fiestas.

Back in 1988, the Fiesta XR2 was a people’s champion. It conformed to the recipe that made small hot hatchbacks so popular. Under the bodykitted exterior sat Ford’s venerable CVH engine in 1.6-litre form, kicking out 94bhp. That’s less than half of what its modern counterpart musters, but the XR2 was light, weighing just 840kg, so it offered the kind of performance-per-pound for which hot Fiestas have become known. 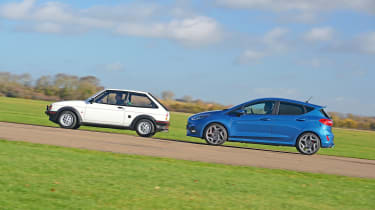 It dipped below the magic 10-second barrier for the 0-62mph sprint, posting a time of 9.9 seconds, while the hot hatch hit 112mph flat out. Thirty years later, this doesn’t feel that fast, but the naturally aspirated engine has a characterful rasp that crescendos towards the red line. You feel the motor’s vibrations as the resonance rattles the trim inside. It makes the modern turbocharged ST feel sanitised in comparison.

Like other heritage examples that we’ve lined up for this celebration, take off the rose-tinted spectacles and you’ll realise things weren’t all great back in the day.

The five-speed transmission’s shift action is baggy and not very precise, while the tyres that wrap themselves around the XR2’s distinctive pepper-pot alloys – along with the dated suspension design and set-up – don’t deliver much grip.

The steering is meaty and slow, and the brake pedal on the wooden side, so you really have to drive this car. It’s a challenge to coax speed from it, which is where the satisfaction lies.

Of course, back in 1988 this was cutting-edge tech and about as fast as you could go for £8,430. You have to manage the bouncing over bumps and modulate the brakes when turning in, because the Fiesta is all too keen to lock an inside front wheel on the entry to corners. But balance these factors and the inputs smooth out into one big transition, and the XR2 rounds bends with a hunger that’s replicated by its descendent – only in some areas the modern Fiesta ST still is a world away.

The ST’s three-cylinder engine is actually even smaller, displacing 1.5 litres, as a sign of the times. But with a turbocharger to boost its output, there’s urgency everywhere. With 197bhp on tap and 290Nm of torque, this Fiesta will sprint from 0-62mph in 6.5 seconds, thanks to the option of a clever limited-slip differential and its launch control technology.

Advanced Ride Control tech in the dampers softens the ride when you’re cruising and, together with force vectoring springs, sharpens up turn-in and control when pushing harder, so the ST is firm but easier to live with, too. It still delivers the eager and playful handling that’s come to carve out this niche as the Fiesta’s own. 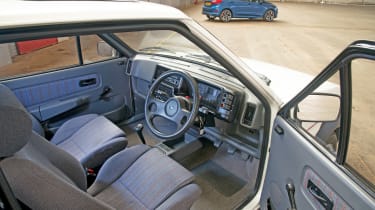 The steering is quick and there’s tenacious grip, but you can subtly adjust it by trimming the throttle as well. The car feels like it pivots around its centreline, which together with the driving position and figure-grabbing Recaro sports seat, instils massive confidence in the driver to push the ST to its limit, which is incredibly high.

With an active exhaust and some enhancement of the three-cylinder motor’s gruff aural signature, the Fiesta ST even sounds good, too.

This move to a smaller three-cylinder engine has changed the character of the car compared with its predecessor. However, in 2018 fuel efficiency is an important factor as well, and there’s clever technology here to enhance this element of a car that many buyers will use for commuting and the daily grind, as much as they will for driving enjoyment.

This is the first three-cylinder engine to have cylinder deactivation, which sounds a lot easier to implement than the complex tech needed to facilitate it. The result is claimed fuel economy of 47.1mpg and CO2  emissions of 136g/km – stats the XR2 could only dream of. Like its elder cousin, then, the Fiesta ST is still exactly what a fast Ford should be, only transformed for the modern age. From 1988 to 2018, it’s easy to see why Britain has adopted the fast Ford as its own. 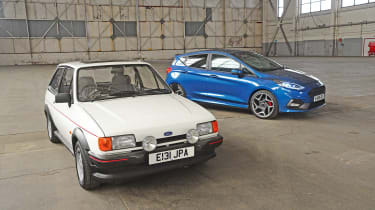 The future for Ford is bright. As a mainstream manufacturer, it will never be first with the most advanced autonomous tech, but such innovations will eventually trickle down to cars like the Fiesta. For the best part of the next decade, though, the supermini will remain. It’s been the best-sellingcar in the UK for decades, and the ST is testament to that. It’s one of the most raucous cars on sale.