Ignore the big difference in size, and there’s clear lineage between the Jet Black Mini and current MINI Cooper 5dr 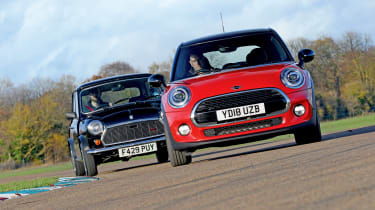 While the ethos might be the same, the Mini of 1988 is surprisingly dissimilar to the MINI of 2018. For starters, the name is different, with the capitalised moniker taking over from the lower case badge when BMW bought the British icon back in 2000.

While the brand might have gone through an ownership change, MINIs are still made at the home of Mini, at Plant Oxford in Cowley. Yet although the classic Jet Black special edition example loaned to us by Mini aficionado Jason Field might be a more modern example of the breed, it shares more in common with the British Motor Corporation (BMC) original of 1959.

This iconic model set the template for the modern small car. Designed by Sir Alec Issigonis, it was a packaging triumph thanks to its transverse engine and front-wheel-drive layout. It not only bequeathed this to its modern offspring, but the cutesy styling provided inspiration for a retro revival with the modern MINI. The round headlights, down-turned grille, the guttering around the roof and the wheel-at-each-corner approach mean there’s an obvious lineage between the two. 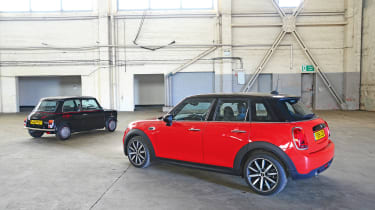 The Jet Black uses a 998cc A-Series engine – carb-fed, not fuel-injected – and was based on the Mini City. Jet Black trim (there was also a Red Hot version) featured all-black paint and upholstery, and unique badging. If you took a test drive in 1988 you got a special Jet Black/Red Hot cassette tape – and if you ended up buying one you got a bespoke Jet Black-branded Sony Walkman, too. It’s all deliciously retro today, but gives this one- owner, 23,000-mile version real appeal. Especially when many of the 1,000 UK examples will have since bitten the dust.

The A-Series engine isn’t what you’d call a powerhouse, with only 39bhp available. But then the Jet Black isn’t overly flabby, so with the motor spinning away you can still make respectable progress in the cut and thrust of modern city traffic. And that environment is, after all, where this little car excels.

The four-speed gearbox isn’t the most precise transmission in the world, but once you’ve learned the length of the throw and the spacing of the gate, you’ll be slipping up and down the Mini’s ratios to keep the 1.0-litre engine on the boil.

You really have to drive the classic, too. Whereas you easily snick through gears and rely on the modern MINI’s turbocharged torque, using wrist inputs to jink through traffic, the Jet Black is more physical.

The brakes need a meaty squeeze and while the steering is immediate off-centre, it weights up as you wind on lock. The original Mini’s driving position feels its age as well, and that’s being polite. 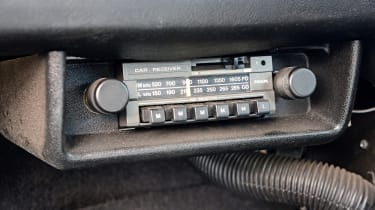 Jump into the modern Cooper and the presence of a pair of rear doors is a big clue to how the famous nameplate has changed. It’s less mini and more maxi today, but with five-door models, SUVs and even plug-in hybrids now available, MINI has moved with the times.

But it hasn’t lost sight of the characteristic that made the brand: fun. This 2018 car obviously rides better than the effervescent and characterful but bouncy chassis set-up of its ancestor, yet it still delivers the same connection between road, car and driver that keen motorists crave from a small car.

With the modern MINI ramping up the British element of the styling – Union flag graphics and tail-lights being a big part of this – to reinforce its heritage, it’s proved that from the ashes of a once-great British company that had lost its way by the new millennium, a phoenix has risen to carry on the legacy. 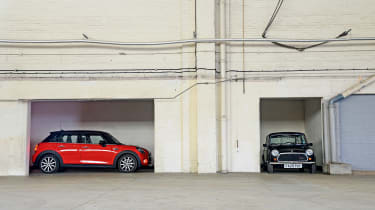 Brexit is potentially a big threat to all these manufacturers, but BMW-owned MINI is right in the firing line when it comes to disruption.

That won’t stop the brand expanding its range, however. Expect more retro-styled British-themed brilliance from the company, with SUVs, EVs and PHEVs to feature even more heavily in its line-up over the coming years. And they’ll all stay true to the original Mini concept of being incredibly entertaining to drive.