The I-Pace favours glossy cabin materials to the XJ’s traditional wood, and instruments and switchgear show how things have moved on 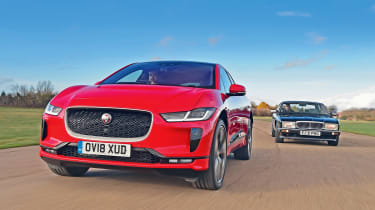 If you wanted a luxury Jaguar back in 1988, your choice was the XJ40. While the XJ still exists in 2018, there’s an alternative that clearly shows how timesare changing, because your options now also include the all-electric I-Pace SUV.

This is possibly the starkest contrast of the cars we’ve lined up here and shows how in only three decades the motor industry has entered a significant new era.

Back in the eighties the XJ40 was an all-new advanced design that moved the game on in the luxury car segment. It might have taken its 221bhp 3.6-litre straight-six petrol engine from the XJ-S, but the saloon’s independent rear suspension and the advanced electronic instruments were forward-thinking and meant it was every bit as appealing as its German rivals. 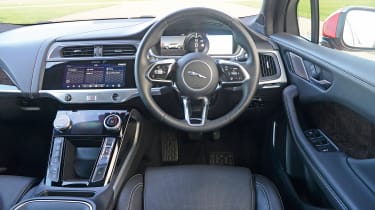 The car in our pictures is a Daimler XJ40. That badge represented Jag’s highest trim level, in effect, and climbing inside, you can see just why it wore that accolade so well. Your smartphone might have more computing capability than the XJ’s digital instrument cluster, but it was a hi-tech treat that set the luxury cabin off in the eighties.

The Daimler’s interior is covered in leather, with soft but supportive seats that, along with the smooth but comically forgiving suspension by modern standards, cushion you from blows delivered by the road.

Thanks to the chassis set-up, it isn’t all that agile, and with slow steering, you have to twirl the narrow-rimmed wheel to guide the XJ round tighter bends. But then, the brief for a luxury car has changed over the years, so this isn’t a surprise – and there are actually many benefits compared with contemporary luxury limousines. 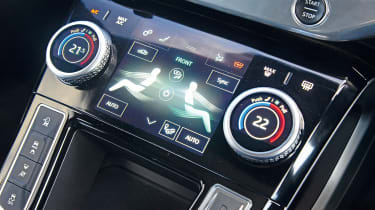 It can still hustle, though. The four-speed automatic takes a while to compute your throttle input before realising it needs to change down, but once it does that turbine-smooth straight-six shunts you forward on a creamy wave of torque.

It’s also incredibly refined. You get the purr of the motor and a silky six-cylinder sound, but none of the rattles or intrusive percussion of some older cars. It’s just right.

Jag’s J-gate made its debut on the ’40, too, so you can take manual control, although it’s more fitting to settle into a sedate pace and let the XJ do what it does best: cruise serenely in comfort.

You don’t have a choice of which gear to select in the I-Pace, because there’s only one. Its two electric motors deliver 395bhp and will rocket this 2,133kg car from 0-60mph in 4.5 seconds without any changes. It’ll do this in near silence as well, so the I-Pace hasn’t lost any of the XJ40’s refinement.

What’s great is how you can feel this Jaguar bloodline running through even its most modern machine. The majority of electric cars have none of the feedback keen drivers love; they ‘feel’ digital and lack communication. But the I-Pace goes some way to bucking that trend. Its steering feels uncorrupted – weighted just right for the size of the car – and pointy, to capitalise on the technology helping underneath.

It might be high and heavy, but the electric motors vector the brawny 696Nm of torque to boost agility. Traction is great and throttle response is instant, thanks to the way EVs deliver their power.

The ride is composed, too. Despite its significant bulk, roll is controlled well and you can carry plenty of speed into corners. 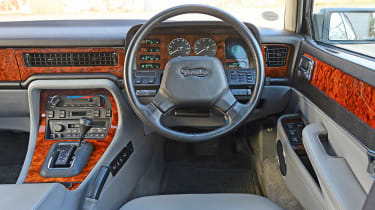 It’s a driver’s electric car, but EVs are about so much more. Range is a critical factor, and the I-Pace’s 90kWh battery delivers up to 292 miles from a single charge.

Deplete that and it’ll take just 45 minutes for an 80-per-cent rapid charge, which is limited by infrastructure to 50kW, rather than the car, because the I-Pace has 100kW charging capability built in.

Regenerative braking means you can recoup energy that would otherwise be wasted when slowing down, too, topping up the battery for even greater cruising potential. It’s something for nothing when compared with a petrol or diesel car. 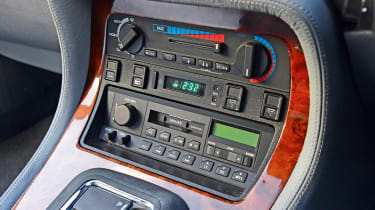 Brake pedal feel could still be better, but it’s one of the best-integrated systems out there – a facet that marks the Jaguar SUV out from its electric rivals.

As with the XJ40, there’s quality to match the engineering underneath. The I-Pace’s cabin isn’t bound by the usual constraints of a front-engined, rear-driven car like the XJ, so there’s no transmission tunnel, which means more space inside for passengers and their belongings.

It shows why the I-Pace is our current Car of the Year and how far Jaguar has come in three decades. This sector has changed a lot over that period, but it feels like we’re set for even bigger advances in the future. 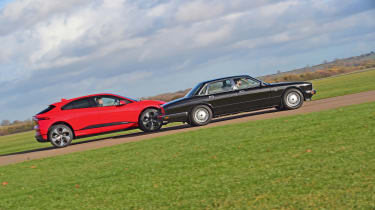 The I-Pace is a window to an electrified world of Jaguars. This is just the first model of many to come that will either be a pure EV or use an increasingly strong electrified element in its powertrain – and from sports cars to luxury models, the tech is applicable.

Jag has shown its established German rivals how to do it with the I-Pace, so expect the British brand to carry its learning and the momentum gained by it through to other products in the pipeline for the future.

An all-electric F-Type, with instant performance and suitably daring styling like the I-Pace, would rejuvenate the brand’s sports car offering, while a future luxury EV such as an XJ saloon would boost refinement and relaxation to the max.