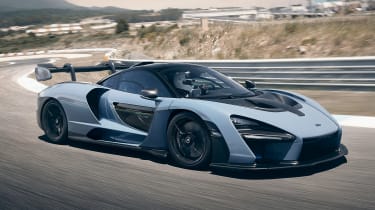 The McLaren Senna redefines what’s possible from a road legal track car. It’s the ultimate expression of performance, yet given the acceleration, the aerodynamic grip and the braking potential it’s relatively approachable. Of course, it’ll bite if you don’t respect it, but drive with a balance of commitment and patience and it will shatter what you thought possible from a car wearing number plates. It’s stupendous and deserves its iconic name.

In McLaren’s own words, the Senna is “the most extreme road car” it has ever built. With a back catalogue that includes the legendary F1 and P1 hypercar, that’s quite a statement – as is naming it after iconic ex-McLaren Formula 1 driver Ayrton Senna.

Despite the huge wing and aggressive aerodynamics, the Senna is road legal. While its styling will divide opinion, McLaren says it looks like it does because form is following function. That form generates an astonishing 800kg of downforce at 155mph, while the 4.0-litre twin-turbo V8 mounted in the middle of the Senna’s carbon fibre Monocage III chassis (the strongest ever for a McLaren road car) produces 789bhp and 800Nm of torque.

With an all-carbon body, this is the lightest car McLaren has built since the F1, so at 1,198kg dry that output has a startling affect. With the standard-fit launch control system, it’ll hit 62mph in 2.8 seconds. However, the even more alarming stat is that it’ll go from stationary to 124mph in just 6.8 seconds. And 0-186mph in 18.8 seconds. 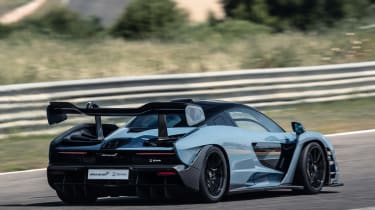 This pace of progress extends to the chassis. There’s something called RaceActive Chassis Control II (RCC II) with four modes for the hydraulically interconnected suspension: Comfort, Sport, Track and Race. As this is a track car first and foremost, and our driving was limited to the Estoril circuit in Portugal, it’s the Race mode that’s most interesting.

This drops the Senna’s ride height by 39mm at the front and 30mm at the rear. Here it looks like it’s positively hugging the road surface – a direct consequence of the system’s interaction with the car’s aerodynamics.

It boosts what’s known as ‘ground effect’, the phenomenon of air rushing under the car and being accelerated at the rear by the diffuser to help suck the car to the road. All this while the body and wings add to it by pushing the Senna into the track even harder. 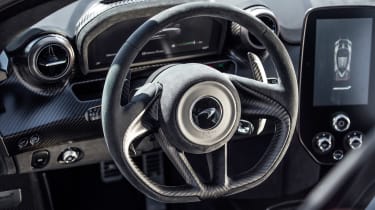 Cars with real race car-like downforce often require confidence and faith to break through a glass ceiling and tap into the aerodynamic grip. As a result it can sometimes make a car difficult to drive and twitchy on the limit, but McLaren has focused on a linear build up to make the Senna more approachable.

It’s entirely that. Through Estoril’s long last turn you can feel the Senna’s nose being forced invisibly into the road even harder as the steering gently weights up. Little applications of the throttle minutely adjust the balance to trim its line giving you so many options on how to drive the car.

The RCC II system is always active and adjusts the damping even in Race mode. At low speed it’s actually softer than the P1 to improve traction, while at high speed it’s stiffer in order to maintain ride height balance, downforce and therefore stability. There’s also clever tech that reduces dive under braking.

The result is a car that shrugs off direction changes, such is the agility and mechanical grip the Senna generates in low and mid-speed corners. In the fast bits, the corners that really challenge your bravery and commitment, the Senna doesn’t feel peaky or highly-strung. In fact, the faster you go the more stable it feels, thanks to that mass of airflow acting towards the ground and forcing the bespoke Pirelli P-Zero Trofeo R tyres into the road.

The key – and the real delight – is its predictability. That’s helped by the communication from the steering. It’s an electro-hydraulic setup with just one mode, and the level of detail is fine and beautifully clear. It’s one of very few modern hypercars that gives genuine feedback as the delicate wheel rim subtly (but never nervously) wriggles communicatively in your hands. Together with the chassis, this conspires to instil huge confidence, given the Senna’s on-paper spec is nothing short of intimidating. 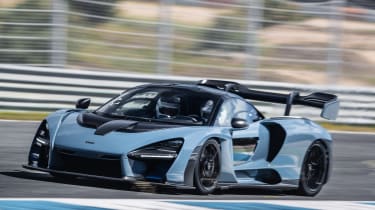 The motor certainly lives up to that though. It hurls the Senna forward aggressively with even a gentle exploration of the throttle pedal’s travel. Traction is strong, but in any of the lower four gears you’ll see the ESC light flashing under maximum acceleration. Of course, the rear tyres will fizz into wheelspin as the car spikes into oversteer, allowing you to exploit the balance. It proves that despite all the serious motorsport-derived performance, the Senna still has a lighter side.

It’s enhanced by the noise. McLaren’s flat-crank V8s are devastatingly effective but not necessarily the most aurally inspiring motors. However, an Inconel and titanium exhaust and a roof-mounted snorkel that feeds the engine with air at least gives more presence. The buzzy sound signature definitely fits with the race car vibe.

The gearbox slices through ratios seamlessly and perfectly blips downshifts. You don’t even think about what it’s doing – it’s that good. The area that really grabs your attention though is the brakes. The Senna can pull 2.1G when you hit the pedal with the active aero helping slow the car, but with parts from the P1 GTR’s braking system there’s beautiful clarity to the feel and they’re so easy to modulate. The brakes have you straining against the six-point race harness, while the whole experience leaves you open mouthed and gasping for more.