McLaren reveals first images and details of its latest Super Series model; only 25 will be made and it's already sold out! 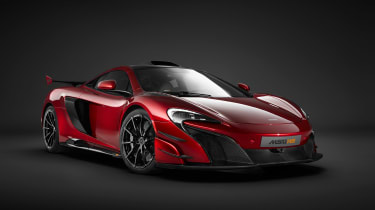 McLaren has unveiled another new addition to its Super Series range: the storming MSO HS. Based on a 675LT it adds performance, sheds weight and boost aero even further.

Commissioned by McLaren's Special Operations team, the MSO HS uses McLaren's familiar 3.8-litre twin-turbo V8 engine, with power boosted from 666bhp to 679bhp and torque up to 700Nm. Part of that is down to a new hand-polished exhaust system, with a crossover muffler which optimises gas flow. Only 25 will be built. 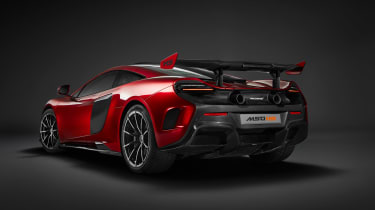 The MHO HS isn't just about straight line pace, however, as it receives a huge carbon-fibre adjustable rear wing from the McLaren P1 GTR programme. Alongside new front splitter and roof mounted air-scoop that means downforce rises to 220kg at 150mph.

Weight saving is the order of the day too, with a bespoke polycarbonate engine cover, lightweight Alcantara cabin trim shaving 3.5kg off and carbon-fibre seats saving another 15kg. The IRIS central touchscreen also absorbs the heating controls to save weight, while features such as lap recording cameras have been added.

The Woking-based carmaker hasn't revealed performance stats yet, but expect the MSO HS to be closer to the hybrid P1 hypercar than ever. All of the 25 examples commisioned have been assigned to McLaren customers, however, and the price varies from car to car.

What do you think of McLaren's most extreme Super Series car yet? Let us know below...