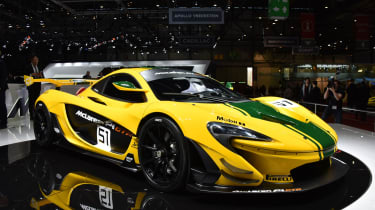 Woking-based supercar maker Mclaren has unveiled the production version of its hardcore P1 GTR at the Geneva Motor Show. The track-dedicated hypercar has been shown with the legendary yellow and green racing livery from the F1 GTR Le Mans racer, and will cost £1.9 million.

Modifications over the P1 GTR design concept seen previously are minor, but the hybrid P1 GTR still gets an astonishing 987bhp, which combined with a 50kg weight loss over the road-going P1 will give a power-to-weight ratio of 684bhp per tonne. That power output is the same as the original Bugatti Veyron, but the GTR is considerably lighter and more aerodynamic. 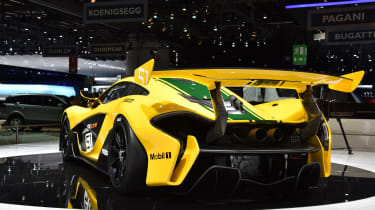 The racer will be the ultimate toy for just 35 of the 375 P1 road car owners, who’ll be the only ones invited to buy the non-road-legal GTR and take part in an exclusive driver programme. Alongside tweaks to the 3.8-litre twin turbo V8 and electric motor powertrain, the lower and wider GTR gets a 10 per cent improvement in downforce.

The green and yellow livery of this P1 GTR is a reference to the firm's F1 GTR Le Mans racing car, of which five examples dominated the 24-hour race on their debut 20 years ago. The striking colour scheme will be available to the 35 buyers alongside the carbon black paintwork we saw on the design concept.

The racer has just completed a gruelling testing schedule where development drivers are racked up thousands of kilometres at  several UK and European locations, as well as hot-weather tests in Bahrain and Qatar. McLaren says the tests enhance the cooling and aerodynamics over and above the concept that appeared at last year’s Pebble Beach Concours d’Elegance.

But the P1 GTR isn’t hunting speed records – this is a machine designed for ultimate lap times. And to help you achieve the bragging rights of a track record, McLaren puts GTR buyers in a bespoke driver programme, amounting to a true F1-style racing experience, show in the video below...

Each owner is treated like a newly-signed Formula 1 driver, gaining access to McLaren's inner circle and receiving expert track tuition with the car. It is a similar experience to that offered with the old Ferrari FXX, where it seems McLaren will essentially keep the car for you and take it to racing events which you will compete in.

So even if you don't get to keep your P1 GTR in your garage, there's no doubt it's a (relatively) cheap way of feeling like Jenson Button. Especially since you get to drive at some of the biggest F1 circuits currently on the race calendar around the world, and have a car specifically tailored to your requirements.

The GTR itself has numerous upgrades over the standard P1. McLaren has stretched the P1’s front track by 80mm to increase front axle grip, as well as lowering the ride height by 50mm. This is further helped by an aggressive front splitter and slick tyres on 19-inch forged wheels with F1-style centrelock hubs.

The inflated wheelarches lead into reshaped radiator ducts, while the all-new rear valance forces the air shooting out from the undertray trackwards to create even more downforce. A new titanium alloy exhaust system saves 6.5 kg, and the side windows are made from polycarbonate. 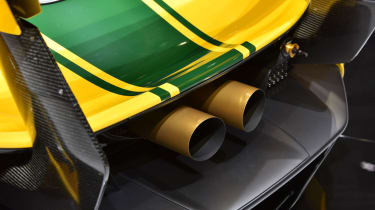 Adding to the aero package is a monstrous fixed rear wing in place of the P1 road car’s pop-up spoiler. The GTR does maintain drag-reduction ability to increase straight-line speed, but the wing’s extra width and slimmer carbon supports are mainly intended to ramp up aerodynamic performance. The wing sits 400mm off the ground. 100mm higher than the standard P1.

Even the wing mirrors have been relocated to the windscreen pillars to reduce drag. The aero tweaks combine to give a downforce figure of 660kg at 150mph, 10 per cent higher than the stock hypercar.

The P1 GTR’s dramatic rear is dominated by two bazooka-sized exhaust pipes where the road car makes do with one flame-throwing outlet. These pipes are fashioned from a heat-resistant nickle and titanium alloy and are naturally unsilenced to make the most of the uprated V8’s soundtrack. 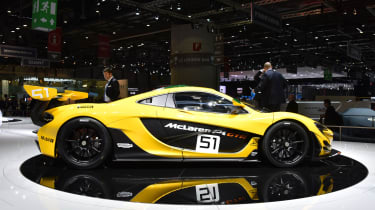 The interior is just as hardcore, with some very serious-looking DTM-style seats and race harnesses. The digital steering wheel is a special bit of kit: it's based on the 2008 F1 car's item, the one that Lewis Hamilton used to win the driver's championship. So it's as close as you can get to being one of McLaren's F1 drivers.

Find out more about the fastest cars in the world here