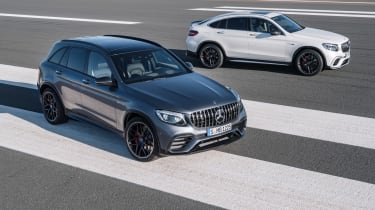 Mercedes-AMG has announced pricing and spec details for its new GLC 63 hot SUV. Available in standard form from £68,920, a swoopier Coupe version can also be ordered from £74,410. 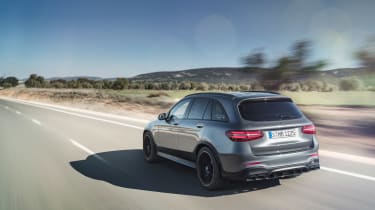 If all this isn’t enough for you then you can choose the GLC 63 S Edition 1 with a starting price of £90,824 (£93,219 for the Coupé) before options. Grey paint with yellow decals, ceramic brakes, 21-inch alloys and a host of interior upgrades justify the price jump. 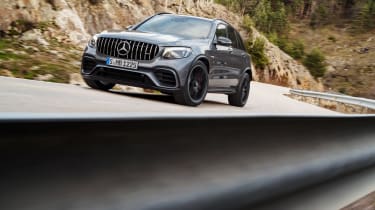 The 4MATIC+ four-wheel-drive set-up features the same variable torque distribution as seen on the new AMG E 63.  Regardless of spec, power is delivered via AMG’s new Speedshift nine-speed automatic gearbox.

Torque can be split between the front and rear axle to optimise traction in certain driving conditions, but it’s heavily rear biased – the rear wheels are permanently driven, and in most circumstances the GLC 63 is rear-wheel-drive. It’s possible for the driver to influence the characteristics of the car though, with a range of selectable driving modes. Comfort, Sport, Sport Plus and Individual settings modify engine response, suspension set-up, gear shift times, the steering and traction control settings and also the 4MATIC+ all-wheel-drive system.

The GLC 63 stands out compared to the rest of the GLC range with several bold styling tweaks. At the front is a new grille similar to the AMG GT, with thick, chromed vertical slats, more aggressive front and rear bumpers, plus new side skirts, a new spoiler lip and 20-inch alloys. A performance sports exhaust also comes as standard.

Let us know what you think of the Mercedes-AMG GLC 63 in the comments section below...