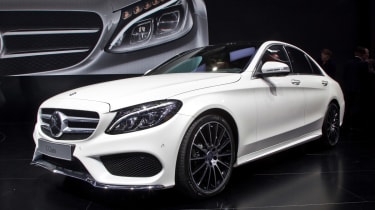 Full prices and specs for the all-new Mercedes C-Class 2014 have been released, with prices starting from £26,855 and the first UK deliveries to be made in June 2014.

Update: Our full Mercedes C-Class review is now online, along with a drive of the C250 BlueTEC model. Click on these links to read the Auto Express verdict. Or get an alternative review of the Mercedes C Class on our sister site Carbuyer.

There will be two engines available in the 2014 Mercedes C-Class intitially: a C200 2.0-litre four-cylinder petrol and a C220 BlueTec 2.1-litre four-cylinder diesel. The gearboxes available with these engines are a six-speed manual or a seven-speed automatic. We're expecting to see three more engines hit the line-up before the end of 2014, including a hybrid model that will appeal to company car buyers.

There will be three trim levels available from launch: SE, Sport and AMG Line. The entry-level SE models cost from £26,855 for the petrol, or £29,365 for the diesel. The SE spec includes 16-inch alloy wheels, Artico upholstery. a touchpad-controlled centrally mounted seven-inch colour display, two-zone air conditioning and a media interface. You can read more about the new Mercedes C-Class interior below.

Go for a C-Class Sport, though, and you'll drive away in a car with 17-inch alloy wheels, LED headlights, lowered comfort suspension, chrome exterior trim and a Garmin sat-nav. Prices for this model start at £28,850 or £31,360 for petrol or diesel respectively

Go even higher to the AMG Line (which starts at £30,345 for the petrol, or £32,855 for the diesel) and you get 18-inch AMG alloys, AMG bodystyling and steering wheel, sports suspension and an Artico finish to the upper dashboard.

Although the C-Class comes with a high level of equipment as standard, Mercedes will offer a host of option packs. 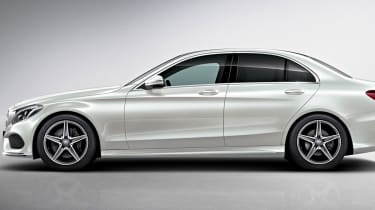 The Premium Plus Pack (£2,795) includes all the elements of the Premium pack but adds COMAND Online and the 590W Burmester Surround Sound stereo.

Additional options include the AIRMATIC Agility Package (£895), which adds variable, self-levelling air suspension. You can also opt for a head-up display for £825, the Air Balance Package at £350 and a 360-degree camera (£335).

The C-Class was officially revealed at an exclusive event on the eve of the Detroit Motor Show. The new, fifth-generation model is far more than just another posh compact saloon - it's set to be the most efficient, refined and dynamic model in its class.

Since then, we've also spotted the high performance C63 AMG version of the new Mercedes C-Class out testing. The flagship model will ge a twin-turbo V8 with around 450hp in standard guise.

"The C-Class is our highest volume model in the world, and the US is its single biggest market," Mercedes CEO, Dr Dieter Zetsche said. "It's only right that it debuts here in Detroit."

Before the Detroit unveil Mercedes showcased the new C-Class at the 2014 Consumer Electronics Show (CES) in Las Vegas where an 'augmented reality app' gave visitors a digital preview of the new car ahead of its official launch at the Detroit Motor Show 2014.

Codenamed W205, the latest C-Class sits on the new modular rear-drive chassis architecture (MRA) that will underpin every large Mercedes for the next five years. This has the capacity for hybrid and electric power, four-wheel drive and a wide range of different vehicle shapes and sizes all built into its structural DNA.

The new Mercedes C-Class is clearly designed to have a family resemblance with the new Mercedes S-Class, with a sleeker look than the current model. It features pulled back LED headlights, prominent styling lines along the body and a sloping roofline.

The Mercedes C-Class Coupe and Cabriolet models will most likely appear in 2015, alongside a high-performance AMG model. This model will get a storming 4.0-litre twin-turbo V8 engine that helps it go from 0-62mph in about 4 seconds.

How do you like your C-Class grille? Me, I prefer the luxury look. But we don't get it in the UK. Good or b... https://t.co/KeP2ZQJqAm 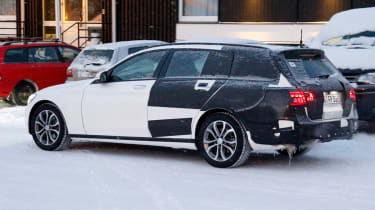 The Mercedes C-Class Estate has been spotted in winter testing by our spy photographers. You can check out the full set of the latest shots in the gallery above. The boot space is expected to be in excess of 500 litres for this model, while all the specs and engines from the saloon will be shared with the more practical estate.

The new C-Class estate isn’t due to be launched until the autumn, but product manager Iris Schleicher told Auto Express: “We tried to make the new wagon look like more of a lifestyle car, more stylish. It’s bigger, too, but we’re trying to ensure it doesn’t look as practical as it is.”

The interior represents a huge step forward for the Mercedes C-Class, making it by far the most luxurious yet. The brand has taken its opportunity to introduce the kind of state-of-the-art technology and luxurious finish that established the S-Class as such a dominant class leader.

The crystal-clear digital TFT screens (one between the dials and a tablet-style display on the centre console) feature pin-sharp colour graphics, and the clickable touchpad control is the kind of new technology that’ll soon be the industry standard.

Opt for the COMAND online upgrade and you get a larger screen, with its pin-sharp graphics and intuitive touchpad and scroll wheel. Using simple smartphone gestures like swiping and pinching you can control virtually all the major functions, click easily through the various sub-menus and trace individual letters and numbers.

In the back the slightly longer wheelbase of the new C-Class means legroom is generous, and headroom is decent as well, while the swept back windows and wide light fabrics only increase the sense of space. The smart switches and vents are carried over to the rear seats, and although there is no official size yet, the boot looks impressively large too.

The boot is also bigger than before, matching the BMW 3 Series with a capacity of 480 litres. 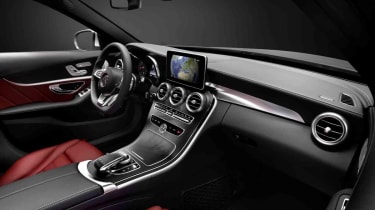 The key to the new chassis is its light weight, and this theme continues throughout the car – 50 per cent of the body is now made from aluminium, so even though the new C-Class is 95mm longer and 40mm wider than before, it’s up to 100kg lighter.

Aerodynamics have played a major part in shaping the sleek exterior design, too. Oversized full LED headlights dominate the aggressive new front end, and will be standard on all UK cars. The AMG Sport-spec model in our pictures gets a beefier front end with larger grilles and a chrome front splitter, and the whole car is tapered at the back for a sleeker profile. But exterior designer Robert Lesnik told us that like all the brand’s saloons, the C-Class has actually been toned down.

“The new A-Class was a game-changer for us, but it’s a Marmite car. People seem to love it or hate it,” he said. “The C-Class is a three-box saloon, one of the industry’s oldest shapes, so of course it has to be more traditional.”

The new C220 BlueTEC diesel has a drag coefficient of 0.24Cd – better than most coupés – and when combined with the lighter body, Mercedes claims to have cut fuel consumption by 20 per cent. This means the 168bhp saloon, which can cover 0-62mph in 8.1 seconds, also emits 103g/km of CO2 – easily beating BMW’s most frugal 320d EfficientDynamics (which emits 109g/km).

Soon after the new C-Class hits showrooms in March, Mercedes will introduce a much wider selection of engines, with an even cleaner 1.6-litre diesel sourced from Renault used to bring headline CO2 figures well below the 100g/km barrier.

Also following will be a 330bhp petrol V6, and by the end of 2014 the full-blooded V8 AMG version will have joined the range. Plus, the C-Class will take its lead from the S-Class by offering a choice of petrol and diesel hybrids. The C300 BlueTEC HYBRID uses the same technology as the E-Class, but promises 72.4mpg.

In another first for Mercedes, the new C-Class will be available with 4MATIC all-wheel drive – even in the UK – as it shares its mechanical underpinnings with the next-generation GLK, due in 2015. That should help the car compete with Audi’s quattro models, as well as the current wave of BMW xDrive saloons – although 4WD will only be available as an option on the most powerful models in the range, including the C220, C250 and C400 V6 petrol.

Despite the efficiency claims, senior development manager Peter Kolb said: “One of the most important parts to develop was the driving experience.”

Mercedes has developed a sophisticated front suspension set-up, borrowed from the S-Class, and will offer three types of springs. All cars have steel Comfort springs as standard, with sportier AMG models getting a stiffer, less forgiving set-up and a 15mm drop in ride height.

Finally, the C-Class will also be available with optional AIRMATIC air springs. These give a choice of five driving modes, plus a self-levelling feature. This tech is a first for the class, and Kolb told us that his team “had used all of its experience with the E-Class” to develop the new system.

To help things feel instantly sportier from behind the wheel, the seats can be lowered 20mm further than before, and they’ve been reshaped for better lateral support. Plus, a new electronic power-steering system aims to improve high-speed stability and increase driver feedback. Kolb also told us that because the bodyshell was so much stiffer, “there will be no complaints about noise or vibration” in this version of the C-Class.

A new six-speed manual box has also been engineered for the C-Class, while there’s the option of an upgraded version of a seven-speed auto. However, Kolb explained a nine-speed transmission is already well underway, and will join the range as soon as it’s finished.