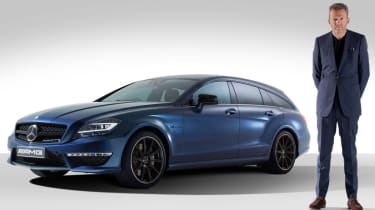 Mercedes and luxury menswear brand Spencer Hart have announced a new collaboration at the London Collections: Men fashion event this week. The two firms showed off the CLS 63 AMG Shooting Brake by Spencer Hart, which has been styled by Spencer Hart’s creative director, Nick Hart.

The car is intended as a showcase for Mercedes’ AMG Performance Studio and its bespoke optioning service. As such, the CLS 63 AMG Shooting Brake by Spencer Hart will be available for customers to order.

Features unique to the CLS63 include a colour called Nick Hart Midnight Blue – which is Spencer Hart’s signature colour – while exterior features that are normally chrome are now in darker, more understated finish.

Mercedes has partnered up with design firms before, including the car that taste forgot – the Smart ForJeremy – but the Spencer Hart link-up is the brand’s first collaboration with a British design brand.