Downsized Mercedes SLC 180 roadster produces 154bhp, has a six-speed manual gearbox and is priced from £32,039 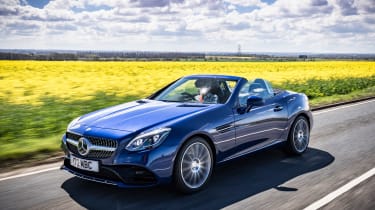 Mercedes has the Mazda MX-5 in its sights with a new entry level version of the SLC coupe-cabrio. On sale now from £32,039, the SLC 180 features a 1.6-litre four-cylinder turbo petrol engine producing 154bhp.

While the MX-5 starts from considerably less in sticker price terms, the SLC's monthly payments now kick off from £276 - much closer to the Japanese roadster. There's only one trim level in AMG Line, as Sport is no longer offered scross the SLC range (Mercedes has lowered the price of the sole AMG Line trim to compensate). Standard kit includes 18-inch alloys, Artico seats, autonomous braking, cruise control and sports suspension. 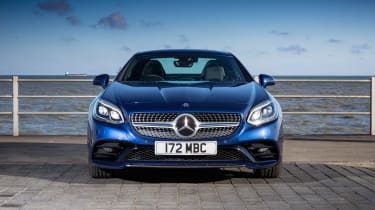 The 1.6-litre petrol also produces 250Nm of torque, meaning a 0-62mph time of 7.9 seconds and a top speed of 140mph. Despite this, it emits 134g/km of CO2 officially, and claims a combined consumption figure of 48.7mpg. A six-speed manual is standard fitment, while the nine-speed automatic is a £1,600 option.

The SLC 180 is available to order now with deliveries expected in late summer.

Would you choose a Mercedes SLC 180 over a Mazda MX-5? Let us know in the comments section below... 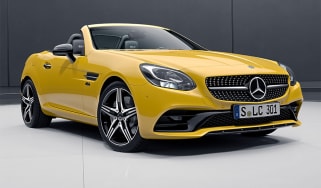