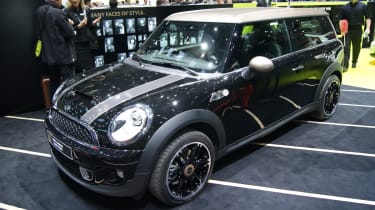 The MINI Clubman Bond Street edition has been revealed at the Geneva Motor Show. The Clubman Bond Street takes its name from the famous shopping street in London, and follows similar specials-edition models like the MINI Camden, Bayswater and Baker Street that have been sold in the past.

All Clubman Bond Street cars are finished in Midnight Black metallic paint with contrasting roof, door mirror caps, bonnet stripes and the lower sections of the C-pillars finished in a gold colour that MINI calls Cool Champagne. There’s more Cool Champagne detailing on the 17-inch alloys that are fitted as standard, too.

The exterior also gets Bond Street badging on the side indicator surrounds and on the door sill protection strips, as well as front fog lights, automatic wipers and the Chrome Line exterior package.

Inside, the MINI Clubman Bond Street gets black leather sports seats with contrasting piping and stitching, leather on the dash top and the Chrome Line interior package to compliment the one fitted to the exterior.

Production of the MINI Clubman Bond Street begins in March, and the car is only set to be sold for a limited time.

The Cooper S and Cooper SD Clubman Bond Street models are powered by 142bhp 2.0-litre diesel and 181bhp 1.6-litre turbo petrol engines, and cost from £23,355 and £24,045 respectively. All cars come with a six-speed manual gearbox as standard, with a six-speed auto available as an option.

Welcome to our Geneva Motor Show hub page, scroll down for all our Geneva content...
MINI Clubman review