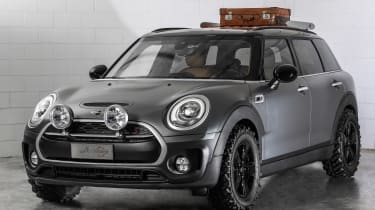 MINI has revealed a new concept version of the Clubman called the ALL4 Scrambler. It’s built to resemble a scrambler motorcycle, specifically the BMW R nineT Scrambler.

The concept car gets a raised ride height, huge off-road tyres and two headlights from a BMW Scrambler bike to recall the look of classic rally-winning Minis of the 1960s. It's not a production car, instead being put on display at the Valentino Park Motor Show in Turin this week.

There’s also a luggage rack on the roof with wooden bars, and the Frozen Grey paint is another link back to the BMW R nineT Scrambler bike. Nappa leather and Alcantara upholstery is fitted inside, too, a leather luggage mat and Scrambler logos on the seats. 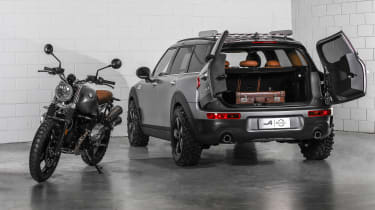 There are no details from MINI on the car's performance figures, but if it's based on the MINI Clubman S ALL4 then it will get a 2.0-litre turbocharged four-cylinder engine with 189bhp. The standard version goes from 0-62mph in 6.6 seconds and up to a top speed of 140mph, but this version isn't likely to match those figures on account of the huge off-road tyres and less aerodynamic roof rack.

What do you think of this MINI Scrambler? Let us know below...