MINI reprises the classic Minivan by removing the rear seats from the Clubman. A stylish LCV for fashion-conscious small-business user 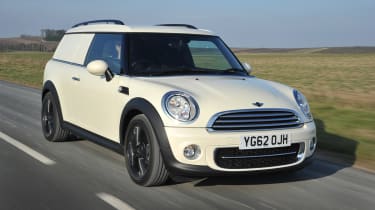 MINI has dug into its pre-BMW back catalogue to recreate the classic runabout Minivan by removing the rear seats and windows from its Clubvan estate car. The result is a stylish, rapid compact van that should suit small businesses that require a commercial vehicle that's small on carrying capability but big on image. Available with a choice of two petrol and two diesel engines, there are a host of options to allow companies to tailor the van to their demands. There is some substance beneath the style, though, with the Clubvan offering almost as much carrying ability as a Fiesta Van or a Corsavan and the added benefit of twin rear doors and a side loading door, which despite being on the wrong side of the van for kerbside deliveries does provide easy access to the load space.

Both the petrol and diesel engines in the manual gearbox Clubvan are 1.6-litre units, the One Clubvan providing 98bhp and the Cooper Clubvan delivering 122bhp. Both petrol engines return a combined fuel economy of 51.4mpg, while emitting 129g/km of CO2. The manual Cooper D diesel van offers 112bhp and returns up to 72.4mpg, with 103g/km. There's also the option of an automatic transmission in the Cooper D, which brings with it a larger 2.0-litre diesel engine. While this produces the same 112bhp as the 1.6-litre engine in the manual van, its fuel consumption drops to 54.3mpg with CO2 emissions rising to 138g/km. Either way, car-derived competitors such as Fthe Fiesta Van and the Vauxhall Corsavan have the MINI beaten, with the ecoFlex Corsavan offering 83.1mpg and 89g/km, and the Ford in ECOnetic trim a similar 85.6mpg and 87g/km.

Though slightly smaller in the back than either the Fiesta Van or the Corsavan, with just 0.86 cubic metres of load volume versus 0.92 cubic metres for the Vauxhall, the MINI does offer easier access to that load area. Double rear doors are easier to load than the hatchback design of the competitive vans and the Clubvan has a single side door, allowing easy access to the front of the load area behind the seats. That said, as with the Clubman car, the door was designed for left-hand-drive markets, so sits behind the driver, away from the kerb. This means that you would be standing in the road to access the load. The Clubvan has an aluminium half-height bulkhead with a mesh upper screen to provide occupant protection from the load. There are tie-down points in the rear and the load bay comes with two 12V sockets to power accessories in the rear. The MINI also provides a very uniform interior shape, with hardly any rear wheel arch intrusion and a boxy shape. All three Clubvan models offer a 500kg payload, which, while less than the 550kg on offer in the Vauxhall, is probably more than enough for the target market. As with all of these compact car-derived vans, both the load volume and the payload fall some way short of dedicated high-cube vans like the Fiat Fiorino, which offers a 2.5 cubic metres load volume and a 660kg payload.

All MINI vans come with ESC electronic stability control, called Dynamic Stability Control, as standard. You also get a half-height aluminium bulkhead with a steel mesh upper section to protect occupants from any load movement. Multiple airbags are present in the cab and the van enjoys all the built-in safety that has seen its car cousins achieve a five-star Euro NCAP rating. Since BMW relaunched the MINI brand in 2001, the UK-built cars have established a strong reputation for reliability and durability.

The MINI range has a deserved reputation for being good to drive, though sportier models equipped with run-flat tyres can crash about a bit on the UK's rougher roads. The additional length of the Clubvan over the hatchback means that the vehicle rides well while losing none of the grip and handling of its car cousins. With up to 122bhp on tap, and even 112bhp in the Cooper D, the MINI is by far the most powerful van in the sector and this is reflected in rapid progress at all times. However, a six-speed manual gearbox does help to offer a relaxed cruise, though it is doubtful that many companies will use the Clubvan as a long-distance hauler. With strong performance and fuel economy, the Clubvan is one of the few commercial vans that UK buyers might be tempted to purchase with a petrol engine. Given that this is unlikely to be a high-mileage LCV, that may not be a bad decision, as you get most of the performance and economy, plus all the style and prestige, at an even lower entry price.

MINI has made a lot of the fact that buyers can personalise their cars, with a host of accessories available. Though limiting the choice of external colours for the van to just four, the Clubvan comes with air-conditioning and a DAB radio as standard. The company then offers buyers a huge choice of optional extras for the Clubvan. This comes mainly in the form of packages, such as the Pepper Pack (£813) that includes Bluetooth with USB connectivity, a leather-clad steering wheel, automatic air-conditioning, extended interior lighting, floor mats, front fog lights, passenger seat height adjustment, a trip computer, a rain sensor with automatic light activation and a storage compartment pack. Alternatively, there's a Media Pack (£1,417) that incorporates Bluetooth with USB connectivity, a navigation system, an uprated radio, voice control and MINI Connected, which integrates the entertainment and online functions of the Apple iPhone into the van.