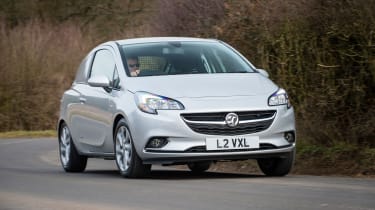 The Vauxhall Corsavan has been propping up the Vauxhall commercial vehicle range for years. It’s reached the point that when a new version of the brand’s Corsa supermini arrives, you know that a load-carrying Corsavan version is just around the corner.

So it was with this Corsavan. Vauxhall announced a heavily facelifted version of its Corsa supermini at the 2014 Paris Motor Show and a new van version hit UK streets six months later, hot on the heels of its car cousin.

The formula for car-derived vans like this is familiar and not particularly complicated. The standard passenger carrying supermini version gets dragged off to a side room in the factory, has its rear side windows panelled over and its rear seats ripped out. In the place of those back seats goes a flat load area and a Corsavan is born.

Being based on a supermini, the Corsavan is a compact vehicle and its load capacity isn't huge. There is, however, a small but significant market for vans like this with the previous generation Corsavan shifting 34,000 units in the UK over a seven-year innings.

Its main rival over that time was the Ford Fiesta van - but Fiat also has a van version of its Punto supermini to add to your shortlist. Beyond that, Corsavan buyers may well be tempted by the smaller purpose-built vans. The likes of Citroen's Nemo and Peugeot's Bipper are designed for the commercial vehicle job and can carry quite a bit more.

Where the Corsavan and its contemporaries excel is in offering a nimble, car-like driving experience, low running costs and compact dimensions. They’re basically small cars so if loadspace isn’t an issue, they’re great in town for getting staff from A to B. 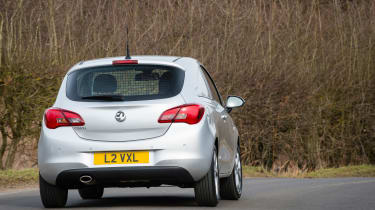 We’ve said that this Corsavan is a facelift rather than an all-new model but the changes Vauxhall made to the vehicle are about as far-reaching as you can get. It’s got sharp new looks and a thoroughly revamped interior displaying impressive levels of quality. The technology quota is ramped up too and if you opt for the top spec Sportive models you get a genuinely upmarket feel in the cab.

Under the skin, revised suspension and thoroughly overhauled CDTi diesel engines improve the driving experience – though not enough to rival the sharp-handling Fiesta van in this regard. The ride is a little firmer than in the car version, but it's comfortable enough and the Corsavan corners with some zest as a result.

There is a 1.2-litre petrol version but almost everyone will choose the 1.3 CDTi diesel engines that are Euro 6 compliant in 74bhp and 94bhp guises. Stop-start is standard on all Corsavan models and there’s an economy-focused ecoFLEX version that delivers 85.6mpg with 87g/km emissions.

In the load area, the Corsavan serves up a 0.92m3 load volume that’s small even for the supermini-based van class. It’s much stronger in terms of payload potential with a class leading maximum weight of 571kg.

The Corsavan’s specific talents won’t suit everyone but there are operators looking for a small, affordable commercial vehicle who’ll never need to carry much in the back. In that role, the little Vauxhall can do a grand job.

There are three engine options confronting the Vauxhall Corsavan customer but the 69bhp 1.2-litre petrol unit will usually be dismissed out of hand. For the record, it delivers 51.5mpg on the combined cycle with 128g/km emissions.

Diesel is still where its at across the whole of the light commercial vehicle sector and Vauxhall has fitted the latest Euro 6 compliant versions of its 1.3 CDTi common-rail injection unit to the Corsavan.

All models get stop-start as standard and that helps the entry-level 1.3 CDTi to return 73mpg on the combined cycle with CO2 emissions of 102g/km. The more powerful 94bhp version of the 1.3-litre CDTi diesel returns very similar figures in standard guise but there is an ecoFLEX model that takes fuel sipping to another level.

With a new turbocharger and a revised exhaust system, the ecoFLEX Corsavan can get 85.6mpg on the combined cycle with emissions of just 87g/km. It’s a great performance that ties the Econetic version of Ford’s Fiesta van. On the downside, the ecoFLEX gets a 5-speed manual gearbox that’s far less satisfying to use than the six-speed item in other Corsavans with the top 94bhp engine. 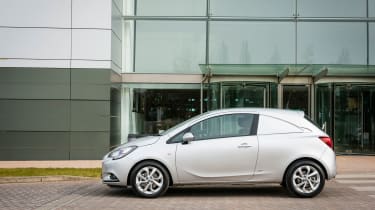 In terms of residual values, we’re told that this Corsavan stacks up better than its predecessor. Service intervals, meanwhile, are set at every one-year or 20,000 miles.

This is a supermini with the back seats removed so its load area is never going to swallow a euro pallet, unless it’s been fed through a woodchipper first. What you do get in the Corsavan is a 0.92m3 load volume and a 571kg payload capacity - that’s 21kg up on the old model.

Rivals like the Fiat Punto van and the Ford Fiesta van can both accommodate a full cubic meter of cargo, so the Corsavan is a little down on outright space but it is strong in terms of payload, with the Ford Fiesta van only managing 508kg. You’ll get a lot more in a purpose-built compact van like the Vauxhall Combo or Ford Transit Connect but operators looking at a Corsavan wouldn’t be doing so if load capacity was anywhere near the top of their priorities list. 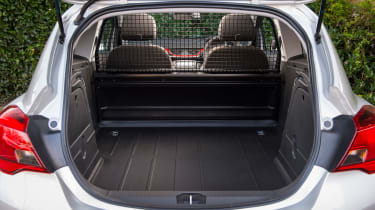 The load space is accessed via the Corsa’s lifting tailgate, which opens to reveal a sizable lip down to a flat load floor. The space is reasonably uniform in shape and quite square at 1,257mm long by 1,264mm wide. The load height is also class leading at 912mm.

Separating the load area from the cab is a half-height steel bulkhead, which can gain a mesh upper section if you specify it as an option. Also on the options list are various load liners and tie-down points for a cargo net.

The Corsavan gets a full compliment of safety kit as standard with six airbags including curtain and side airbags. There’s also an ESP stability control system with a full suite of active safety aids including traction control, Cornering Brake Control, Straight Line Stability Control, Brake Assist and Hill Start Assist.

Tyre pressure monitoring is standard too and the options list features a Technical Pack that adds Lane Departure Warning and a Follow Distance Indicator. Also included in this package is Vauxhall’s Traffic Sign Recognition system that keeps you abreast of the speed limit and Forward Collision Alert that warns you if you’re closing in on the car in front a little too quickly. It all means that the Corsa has the potential to be one of the safest vans of any size out there.

The Corsavan drives well enough. The 1.3-litre CDTi diesel is a smooth unit that’s a little loud around town but settles down nicely on the motorway where the main noise finding its way into the cab is tyre roar.

Performance is good given the engine size with a linear power delivery and decent flexibility that keeps the amount of gear swapping in check. The 6-speed manual has a far better feel and a smoother action than the 5-speed gearbox option. 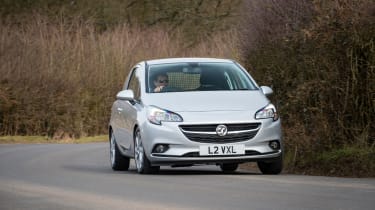 The speed sensitive electric power steering isn’t particularly sharp but there’s a good weight to it. In town, there’s also the option of prodding the City button for more electric assistance. It can’t match the steering feel and precision of the Ford Fiesta van but few operators are going to be overly concerned by that.

The Corsavan rides quite firmly but the tautness helps give the van good body control and a nimble feel on the road. A bit of weight in the back will probably settle the ride down a bit too.

Inside, the cabin is unchanged from the Corsa passenger car. That means decent build quality and some attractive features. The Sportive models add some more exotic piano black trim finishes that might pick up scratches under hard use but the leather trimmed steering wheel is a welcome addition on these more expensive versions. 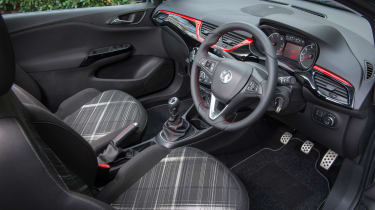 It isn’t the most practical light commercial vehicle cabin you’ll come across but that’s do be expected as the Corsa is a car first and foremost. You’ll struggle to find space for larger items with the glovebox completely taken up by the owner's manual but there are cupholders and reasonably spacious door pockets.

Vauxhall offers an Intellilink 7-inch touchscreen sat-nav system as an option and many operators will like the sound of the Winter Pack that adds heated seats and a heated steering wheel to the heated windscreen you get on the Sportive variant. 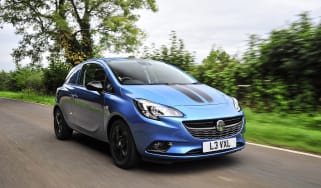 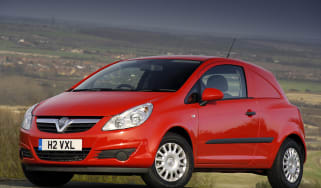 Vauxhall’s smallest van, based on the Corsa, is a compact, manoeuvrable urban runabout that combines economy with reasonable load carrying
Skip to HeaderSkip to Content