The Fiat Punto Van is available with a single body style and is best suited to carrying small, light loads. It also offers a good payload 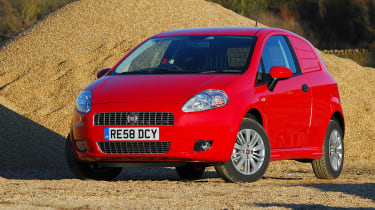 The Fiat New Punto Van was launched at the CV Show at the NEC in April 2012 and replaced the Grande Punto Van. It's based on the three-door Punto model and brings a range or improvements compared with its predecessor. Like other small hatchback vans, the rear seat has been removed and replaced with a load floor, with solid panels replacing the rear windows. It's not particularly easy to load thanks to a high sill that you have to lift loads over and it being an awkward stretch to reach the front of the load area. Standard and SX trim is available. Originally, the model was powered by three variants of the Fiat 1.3 Multijet II diesel engine, producing 75bhp, 85bhp and 95bhp. This has now been joined by the 85bhp variant of Fiat’s two-cylinder TwinAir petrol engine.

All engines are equipped with automatic stop-start, except the 75bhp version of the 1.3-litre diesel engine. A five-speed manual gearbox is standard across the range. VED is not related to CO2 emissions for vans, so despite offering combined CO2 emissions as low as 90g/km, Punto owners will still pay £220 per year, the same as that paid on a large Ford Transit. The 85bhp TwinAir offers the second lowest CO2 emissions of all Punto Vans, with 98g/km and combined fuel consumption of 67.2mpg. The lowest fuel consumption is delivered by the 85bhp variant of the 1.3-litre diesel engine, with 80.7mpg recorded on the combined cycle. Both the Ford Fiesta Van and the Vauxhall Corsavan offer better combined cycle figures. The Punto Van needs servicing every 21,000 miles or 24 months, regardless of engine. This is the longest fixed service interval of any hatchback van, although the Minivan offers variable service intervals.

The Fiat Punto’s 1.0-cubic-metre load volume matches that of the Ford Fiesta Van and is larger than the 0.9-cubic-metre minivan and Vauxhall Corsavan, but there's not a great deal in it. To find a larger load space in a small van, the Citroen Nemo, Fiat Fiorino and Peugeot Bipper offer 2.5 cubic metres, the option of a sliding side door and twin rear doors to make loading easier. Like its hatchback competitors, the Punto Van's load space is accessed only from the opening tailgate, meaning there's a high loading sill to lift loads over. It's also a stretch for most people to reach a load that's at the front of the load compartment, too. The tailgate access makes loading restricted and the van was never designed to be loaded from a forklift truck, so inevitably there are limitations on what the van is suitable for. The Punto’s load area is best suited to small, relatively light loads that are loaded and unloaded manually, such as parcels. A full-height mesh bulkhead is standard equipment, as it is on the Minivan and Fiesta Van. The Corsavan has a half-height steel bulkhead. The Punto Van has a gross payload of 530kg, and only the Vauxhall Corsavan offers more among the hatchback vans, with 550kg, although the Nemo, Fiorino and Bipper offer 660kg. Around half a tonne is a respectable figure for such a small van and few users are likely to carry that much weight. Both the Fiesta Van and Corsavan have a longer load area than the Punto Van’s 1,200mm, although the Punto Van has the widest load area of the hatchback vans, even though the width between the wheel arches at 976mm is one of the narrowest. Only the Corsavan has less width here.

There are reports of premature failure of the front suspension top-mount bearing and heavy front tyre wear on earlier Punto models, but it's not clear if this has persisted with the new Punto. Mechanically, the 1.3-litre diesel engine has been around for about 10 years and seems to be fairly reliable. The TwinAir petrol engine is relatively new, but doesn't appear to be showing serious problems. The new Punto Van is the only hatchback van to be fitted with ESC electronic stability control as standard, giving it an advantage over its small-van rivals. Driver and passenger airbags are standard, too, with a driver’s knee airbag included with SX models.

The 1.3-litre diesel engine offers reasonable performance, particularly with the 95bhp version of the engine. It has always been a refined engine, too, with low noise levels. With 190Nm or 200Nm of torque, depending on power rating, it offers acceptable performance. All models are fitted with a five-speed manual gearbox. The TwinAir engine is full of character and, although it has less torque than the diesel engine, it pulls well. But it will take a toll on fuel consumption if driven hard. Since it doesn't have a particulate filter, the petrol engine is probably better suited to local running.

The Punto was one of the first superminis to get a more spacious body and this means that the cab is a comfortable place to be. Features include Fiat’s two-stage electric power steering. Press a button on the dashboard and extra assistance is provided to make low-speed manoeuvring easier. It reverts to normal assistance automatically as speed rises, in case you forget to switch it off again. Overall, it's well equipped, with remote central locking, electric windows, heated electric door mirrors, a trip computer, a height and reach-adjustable steering wheel, and a height-adjustable driver’s seat included as standard. It lacks the storage space of a purpose-built van. 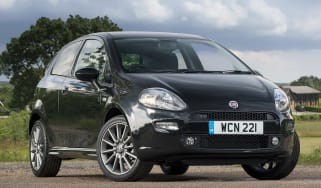 The new, limited edition Fiat Punto Jet Black 2 is now on sale in the UK, and is yours for £12,000
Skip to HeaderSkip to Content