The Citroen Nemo is smaller than the Berlingo, but still roomy. It’s easy to drive, but newer rivals are smoother 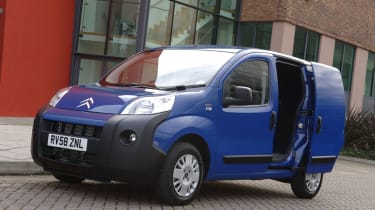 It's easy to see the appeal of a really compact van. They're cheap to buy, offer great fuel economy, and are much easier to navigate around crowded city streets than a full-size panel van. But your choice is somewhat limited in this sector - there's supermini-based offerings like the Ford Fiesta van and Vauxhall Corsavan, but if you need a little more load space, the Citroen Nemo could well be worth considering.

Launched in 2007, the Nemo shares its platform and most of its components with the Peugeot Bipper and Fiat Fiorino. They're all built together at the same factory in Turkey, and there's little to seperate them besides slightly different front and rear styling.

The Nemo is getting on a little in years now, and it shows. The driving experience is pretty unpleasant and the cab is dated. Initially the Nemo was available as a rugged Combi crew cab or a plusher Multispace MPV-style vehicle, but these have been dropped from the lineup leaving just the standard van bodystyle. Indeed, Citroen now only sells thre versions of the Nemo

There's no choice of wheelbase or body height with the Nemo, and there's only one engine option, too - a 1.3-litre diesel sourced from Fiat with 79bhp. It's not exactly powerful, especially when fully loaded up, but it's economical - offering over 50mpg.

There are three trim levels to choose from, starting with X, and moving up through LX and Enterprise. Entry-level X offers ABS, ESC, a driver's airbag and a CD player. Next up is the LX, which adds remote locking, seat height adjustment for the driver and electric windows. Top-spec Enterprise trim adds air-conditioning, parking sensors, and an upgraded stereo with Bluetooth connectivity.

All models come with a folding passenger seat which can extend the length of the load bay - a great feature in such a short van.

The diesel engined Nemo, badged HDi 80, is powered by Fiat’s 79bhp 1.3 MultiJet motor. Driven carefully, around 60mpg in fuel economy is possible, but low to mid-50s mpg is more likely. The 72bhp 1.4 petrol engine that was available in the line-up has now been dropped.

CO2 emissions are 115g/km, but since van owners pay a flat rate of road tax, it's only your environmetal conscience that needs to know that. Service intervals are set at 20,000 miles/two years. Expect insurance to be in the 2E to 4E range.

You need to spec-up to at least the LX mid-range model to get remote central locking with deadlocks on your Nemo. The vehicle is also fitted with an immomiliser/transponder, but the rest of the security kit you'll need is on the options list. The list includes full steel, or half-height with mesh bulkhead, and security meshes for the rear windows, as well as a vehicle alarm - but that's only available on vans with glazed rear doors.

The Nemo comes with two unglazed asymmetric rear doors as standard, for security, and a ladder-type bulkhead behind the driver’s seat. The rear doors will open to 180 degrees. There's a range of bulkhead options, including a folding-cage-type bulkhead designed for use with the standard Extenso folding passenger seat, so that even when the seat is used to extend the load area on the passenger side, the driver has some protection from a shifting load.

The Extenso seat can be used as a passenger seat, a table for the driver with the seat back folded down, or it can be lowered further and locked in place to form an extension of the load area on the passenger side. This extends the load-area length from 1,523mm to 2,491mm, enabling items such as ladders or piping to be carried.

There’s not a lot in it, but the Nemo’s load space is 154mm longer, ignoring the Extenso seat, 13mm wider and 53mm lower than the Citan Compact. The Nemo’s load-space dimensions are identical to the Fiat Fiorino and Peugeot Bipper. The 180-degree opening rear doors give good access to the load space. LX and Enterprise models come with a nearside sliding side door, too, and there’s an option of an offside door. Tailor-made racking is available for the Nemo. The load space is over twice the size of hatchback vans such as the Fiat Punto van, Ford Fiestavan and Vauxhall Corsavan and access is far better, too. The Minivan offers another alternative with similar access, but the load space is much smaller than the Nemo’s.

The Nemo engine range had been in use for some time before the model was launched. Before mid-2010, diesel models were fitted with Peugeot Citroen’s 68bhp 1.4-litre HDi diesel. All engines seem to have a good reputation for reliability. There are reports of premature failure of the front suspension top-mount bearing and heavy front tyre wear, a problem apparently inherited from the Fiat Punto, on which the van is based.

Early models were not available with electronic stability control (ESC), causing a Nemo passenger model to fail the “Elk” test in Germany in 2010 and turn over. The test involves a sudden lane-change manoeuvre. ESC is now standard across all models.

Because the Nemo is based on a car – the Fiat Punto – it’s no surprise that it drives like one. The power-assisted steering is light and the van handles well. The downside is stiff and bouncy suspension, most noticeable when lightly loaded, which does not make for a smooth ride.

It can be thrown off by potholes and bumps. This is probably the result of the short wheelbase and relatively high payload capacity of 660kg, resulting in stiff springing, but similarly short models like the Ford Fiestavan and Vauxhall Corsavan ride better. The diesel engine pulls well and the Nemo can cruise easily at motorway speeds with the minimum of mechanical noise.

The Nemo cab feels surprisingly large for a small vehicle, probably because the driving position is fairly close to the centre of the van, so set well back from the base of the windscreen. The deep windscreen and large mirrors give reasonable all-round visibilty but there's no wide-angle section of the mirror.

Storage space is good, with a deep glovebox capable of holding a laptop. There are useful door pockets, too. A full-steel bulkhead helps to cut down on road noise from the load area, although this limits the usefulness of the Extenso seat.