The MINI Clubvan is a more practical version of the Clubman, with a two-seat layout and a big boot 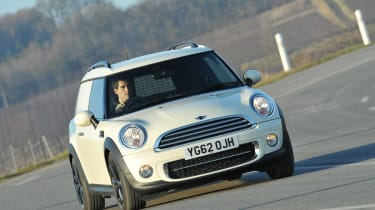 The MINI Clubvan is the first commercial vehicle from MINI and uses the same extended chassis as the Clubman estate. However, the rear seats and windows have been taken out to make way for a separate, carpet-lined loading bay with an 860-litre capacity. Designed to allow MINI to make more profit from this unique body style after the relatively slow sales of the Clubman, the Cluban gives buyers less choice than the standard car (only four colours are available) and just three trim levels (One, Cooper and Cooper D). But because business buyers can claim back the VAT on the Clubvan, its price is lower than you might expect. Better still, the interior and fun handling have survived the conversion unharmed.

The Clubvan drives just the like Clubman, with sharp handling, lots of grip and excellent steering. The extended wheelbase means the suspension soaks up bumps better than the standard MINI Hatch but the ride is still firmer than you might expect. There are three different 1.6-litre engines available - two petrols and one diesel. The petrol range kicks off with the 97bhp One Clubvan but it feels quite sluggish compared to the 121bhp Cooper version, which takes 9.8 seconds to complete the 0-62mph sprint. Both come with a slick six-speed manual gearbox but an automatic version is available as an option. The pick of the range, though, is the Cooper D Clubvan, which gets a healthy 270Nm of torque, making it feel really punchy. The diesel is also a little gruff at low speed but makes up for it with really low running costs.

Both petrol versions of the Clubvan return identical economy figures of 51.4mpg and CO2 emissions of 129g/km. However, if you swap the manual gearbox for the automatic, these figures fall to a less respectable 43.5mpg and 152g/km. They're fine for town use, but on a longer run are unlikely to return much more than 40mpg in normal driving. The Cooper D is the star again with a combined 72.4mpg and tax-friendly emissions of just 103g/km. Like any other MINI, the residual values should be higher than rivals like the Vauxhall Corsa or Ford Fiesta vans, while insurance and servicing should also be very manageable. The Clubvan also has the added bonus of being VAT exempt, which means company buyers can claim back the tax costs after making their purchase.

Although the MINI Clubvan comes with less colour choices and outlandish accessories than other cars in the MINI range, it still has bags more style than most commercial vehicles. It comes in either green, white, blue or black but owners can display their company logo on the blanked out side panels where the rear windows used to be. Dull 15-inch alloys are standard but the usual range of larger and more garish wheels can be had as optional extras. Inside, the cabin layout is exactly the same as every MINI in the range, with a low-set driving position, retro instruments, toggle switches and sturdy build quality throughout.

While the 860-litre loading bay is impressive, the Clubvan's dimensions are limited by its chassis platform. The fixed partition inside means the boot can't swallow longer items and although it is flat and wide, the double doors at the back don't really open wide enough to get bulkier items inside. MINI says it can carry a maximum of 500kgs. It keeps the rear-opening side door from the Clubman model, but access from this side is restricted by the partition. Rear visibility is very limited, though, and there is only room for one passenger to sit alongside the driver up front.

The MINI Hatch on which the Clubvan is based scored a full five stars for adult occupant protection in its Euro NCAP crash tests, and the Clubvan should prove itself to be just as safe. It also benefits from BMW's excellent reliability record and shares its engines and chassis parts with the rest of the range, so they have all been tried and tested. Plus, the materials used and build quality are all superb. Front and side airbags come as standard, as does traction and stability control. 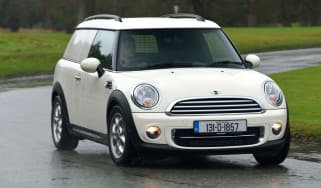 Has the MINI Clubvan been turned into the trendiest van around? We get behind the wheel to find out
MINI Clubvan revealed 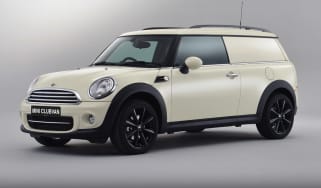 First official pictures of the new MINI Clubvan have been released, and it will start from £11,000
Skip to HeaderSkip to Content