Has the MINI Clubvan been turned into the trendiest van around? We get behind the wheel to find out 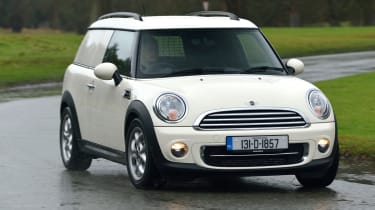 As the first premium car to become a small commercial vehicle, there’s simply no cooler van on the road. The MINI Clubvan will inevitably be bought first and foremost for its image and the economical Cooper D model is the star of the line-up. While it’s not cheap, it’s incredibly efficient and, as an extra bonus to owners, it’s fast and lots of fun to drive. The only real problem is that the loading area still isn’t all that large.

Owners of hip and trendy small businesses rejoice; with the arrival of the MINI Clubvan, there’s finally a compact van to do the boring cargo-carrying stuff, while also grabbing attention like no other car-based commercial vehicle on the market.

It seems such a simple idea now that it’s in the showroom, but it took a while for MINI to realise that the quirky Clubman ‘estate’ would make a useful van. The rear seats are removed and the flat floor and side walls are trimmed in carpet. And unlike most vans, the roof gets a proper liner.

Access to the 860-litre load space is through the split rear door only. Open the ‘Clubdoor’ on the side and the mesh divider means you can reach an arm in, but that’s it.

The new model has been rated to a 500kg payload and to help keep that in place there are flush-fitting attachment loops.

As you’d expect, it’s no different to the Cooper D Clubman from the front seats. The 1.6-litre turbodiesel isn’t the quietest, but it makes up for that with plenty of pulling power. It’ll leave its closest rival – the Ford Fiesta 1.4 TDCi van – trailing at every opportunity, thanks to 110bhp and 161Nm of torque, which is all available from low down in the rev range.

Despite the grunt on offer, it’s sometimes necessary to change down from the tall sixth gear while cruising if more urgent acceleration is required. But that gearing contributes to impressive fuel economy of 72.4mpg and CO2 emissions of only 103g/km.

And of course the Clubvan is just as much fun to drive as the car it’s based on – so long as your cargo isn’t too fragile. That’ll appeal to business owners who can’t justify a fun company car because of tax implications – as the Clubvan is a commercial vehicle, buyers can claim back the VAT. This Cooper D is top of the range, but the line-up starts from £11,100 excluding VAT for the MINI One Clubvan – £4,390 less than the equivalent Clubman with VAT added.

MINI will offer the Clubvan in just four colours (white, blue, green and black), while dull 15-inch alloys are standard. Still, it’s likely that no two Clubvans will look the same – the sides are designed to double up as an advertising board, emblazoned with your company’s logo.