British coachbuilder Morgan has unveiled a 50th Anniversary Edition of the Plus 8 sports car at the Geneva Motor Show. Just 50 units will be built, and Morgan has confirmed that the 50th Anniversary Edition – alongside the new Aero GT – will be the final time the company makes use of the 4.8-litre naturally aspirated V8 BMW engine. The engine has been used in the Plus 8 since the car’s rebirth in 2012.

To celebrate Plus 8's half century, Morgan will give the 50th Anniversary car a special blue lacquered paint, said to be reminiscent of the colour scheme used on the first production car. Hand-painted yellow accents also feature around the front grille, as well as on the bonnet and rear towing eyes. 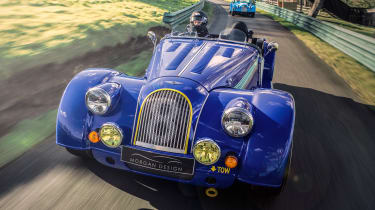 Morgan claims that the 1,100kg Plus 8 is one of the lightest V8 engined cars in the world, hitting 0-62mph in 4.5 seconds en route to a top speed of 155mph. Further spec details for the Morgan Plus 8 50th Anniversary Edition have yet to be confirmed, although it should at very least match the 362bhp and 490Nm of torque managed by the standard car.

Steve Morris, Managing Director of Morgan Motor Company, said: “This 50th Anniversary Edition is a fitting illustration of the Plus 8’s beauty and finesse, coupled with raw exhilaration and capability.