The current BMW S1000RR Sport, more powerful and refined than before, remains the class yardstick 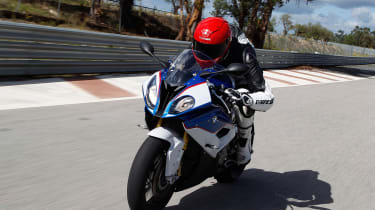 The recent arrival of high-quality challengers including Honda’s Fireblade and Suzuki’s GSX-R1000 means that the S1000RR isn’t as dominant as the original model was in the years following its 2010 introduction. But BMW’s four-cylinder charger is still a formidable contender, backing up its 199bhp engine and sweet-handling chassis with top-quality electronics, a competitive price and even civilising options including cruise control and heated grips. Perhaps the RR’s success and sheer familiarity mean it lacks the wow factor of some rivals. But by any objective standard, BMW’s ferocious yet remarkably refined and rideable four remains the machine against which other open-class superbikes are judged.

The original S1000RR raised the super-sports bar partly with its phenomenal blend of powerful, 999cc straight-four engine and lightweight chassis; and even more so with its advanced electronics including multiple riding modes and adjustable traction control. In 2012 the RR was updated with revised engine and suspension; a year later BMW added an exotic derivative, the HP4, which was among the first motorcycles with semi-active suspension. The current S1000RR was introduced in 2015, combining an even lighter and more powerful engine with the option of further electronic features including HP4-derived semi-active suspension.

The standard 2017 S1000RR has three riding modes, to which the optional Pro mode adds a track-focused Slick setting, and allows traction control to be fine-tuned on the move via buttons on the handlebar. Another option is the semi-active suspension system, which BMW calls Dynamic Damping Control. That option is incorporated into the upmarket S1000RR Sport model, which also incorporates a gearbox quick-shifter, heated grips, LED indicators and pillion seat cover. Accessories include numerous carbon-fibre parts, a lightweight titanium exhaust, and a GPS-activated data logger that can record lean angles, throttle position and even a rider’s line around a racetrack. 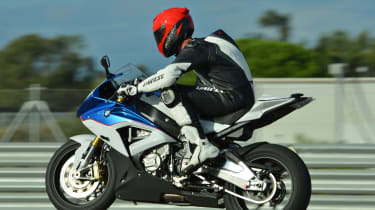 BMW hasn’t found the need to revamp the S1000RR engine since a revision for the 2015 model year, when the dohc, 16-valve powerplant gained a new cylinder head featuring revised intake camshaft and lighter inlet valves. A bigger airbox, shorter intake trumpets and a redesigned exhaust system helped add 6bhp at the top-end, raising maximum output to 199bhp at 13,500rpm, and putting the RR in motorcycling’s unofficial 200bhp-or-thereabouts club along with rivals including Aprilia’s RSV4, Ducati’s 1299 Panigale, Kawasaki’s Ninja ZX-10R, MV Agusta’s F4 and Yamaha’s YZF-R1, as well as the new Fireblade and GSX-R1000.

Eyebrows were raised back in 2010 when the original S1000RR arrived complete with Japanese-style twin-spar aluminium frame. The layout wasn’t remotely original but proved hugely capable, backed-up by high quality suspension. The chassis was tweaked in 2012 and further revised for 2015, when it gained a lighter frame with revised stiffness and sharper steering geometry. At just over 200kg with a full tank the RR is slightly lighter than the previous model, and competitive with its closest rivals. It is also very well braked, thanks to a Brembo front system that incorporates track-ready ABS but not the cornering ABS system that some rivals now feature. The ultimate S1000RR is the exotic HP4 Race, a limited-edition, track-only variant with 215bhp output, carbon-fibre frame and £68,000 price tag. 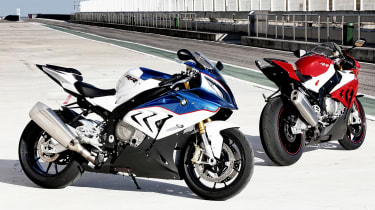 That the S1000RR is searingly fast goes without saying. As well as having a top speed of close to 190mph it has stupendous acceleration and very strong midrange response, which contributes to its remarkably rider-friendly roadgoing performance. So does the Sport’s traction control system, which is easily adjustable and operates very smoothly and unobtrusively. The gearbox quick-shifter works in both directions through the six-speed box, and is a joy to use on both road and track.

Chassis performance manages to combine pin-sharp racetrack steering with excellent roadgoing manners and even a respectable level of comfort. The Dynamic Pro semi-active system means that suspension damping rates can be tuned with the press of a handlebar button, instantly coping with the change from smooth track to bumpy street. The RR is an uncompromising sports machine but it’s reasonably roomy and sufficiently comfortable to cope with long distances. 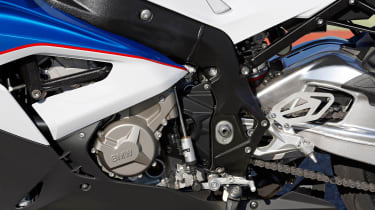 Nobody buys a 200bhp superbike expecting it to be cheap to run, but the S1000RR is respectably economical given its vast performance. Owners typically see mpg averages in the low 40s, giving range of 150-plus miles from the 17.5-litre tank, though inevitably consumption increases dramatically with hard use, especially on track. Most owners opt for an annual service after riding up to 5000 miles; a valvegear check is due at 18,000 miles. Fat, sticky tyres are an inevitable expense, especially for heavy-wristed riders.

Reliability is generally very good, though early RRs gave a few problems, especially when used on track, notably with gearboxes, valve retainers and connecting rod bolts. A rattle from the exhaust could mean a broken exhaust valve, a fairly common problem. The early model’s switchgear was also fragile but the BMW’s sophisticated electronic rider aids have proven very dependable. 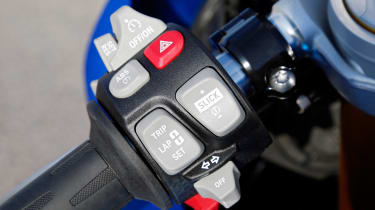 The S1000RR is unmistakable, at least from the front, thanks to the trademark asymmetrical glare provided by its different shaped and sized twin headlights. The second-generation RR, introduced in 2015, is most easily distinguishable by its reversed face, which has the smaller main beam lens on the left and larger dip on the right.

There’s plenty of quality in evidence from the rider’s seat, including a high-tech instrument console that displays actual and maximum lean angle, acceleration rates and more. For circuit use there’s a launch control, useful only when racing, plus a pit-lane speed limiter. This can also be deployed for entertainment on the road, where the optional heated grips and cruise control are likely to prove more useful.

Build quality is reasonable but not outstanding, and a hard-used RR requires regular attention if corrosion of its alloy parts is to be prevented. Vulnerable points include the engine’s sump, which is inaccessible and prone to rotting if ignored. But that is one minor flaw of a model that established a stellar reputation almost instantly following its launch in 2010, and has remained among motorcycling’s fastest and finest ever since. 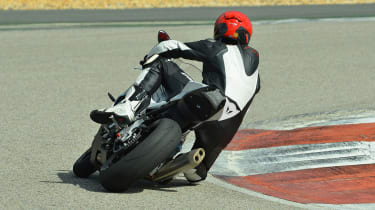