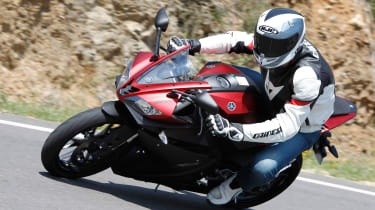 The smallest member of Yamaha’s YZF family of sports bikes has been a best-seller for almost a decade, and has maintained its popularity following a revamp in 2014, since when it has shared many components with the naked MT-125. That success is easy to understand. The YZF-R125 has some of the fully-faired style of the YZR-M1 ridden in MotoGP by Valentino Rossi and Maverick Viñales, despite being powered by a 125cc four-stroke single-cylinder engine that is limited to 15bhp by A1 licence regulations. For such a racy-looking bike, the R-125 doesn’t handle with quite the sharpness some might expect, but its rev-happy engine, rider-friendly handling and well-proven reliability make a very appealing combination for young riders, and the price remains reasonably competitive.

Yamaha has a history of sporty small-capacity bikes that goes back to the Sixties and includes legendary models such as the 50cc FS1-E and RD250LC, on which generations of riders cut their teeth. Those were all two-strokes, but the YZF-R125 manages to have a similarly sporting image, despite being powered by a liquid-cooled four-stroke engine and limited to 15bhp, like rivals including Aprilia’s RS125, Honda’s CBR125R, KTM’s RC125 and Suzuki’s forthcoming GSX-R125.

The YZF-R125 was launched in 2008 and immediately became a hit. Five years later, it was top of the UK super-sports sales charts and had sold well over 40,000 units in Europe. However, Yamaha wanted a new 125cc model for its naked MT family, and was keen that it should share most parts with the sports model. So, the following year brought a redesign that left the faired single’s basic style in place, but many components changed. At £4,599, the Yamaha is one of the more expensive 125s, but has lately been available with 0 per cent finance to help make it more affordable. 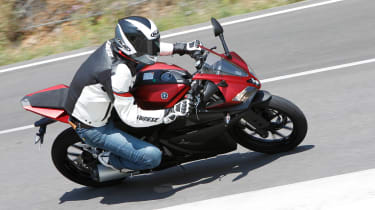 Like all the sportier bikes in the A1 licence class, the Yamaha is powered by a single-cylinder engine that is limited to 15bhp. In the YZF’s case, this is produced at 9,000rpm, and delivered to the rear wheel via a six-speed gearbox and chain final drive. The maximum torque figure of 12.4Nm is produced at 8,000rpm, hinting at the single’s revvy nature.

The chassis has a pretty high specification, including an aluminium swing-arm and upside-down forks, although the suspension is not adjustable and, unlike Aprilia’s RS125, the Yam uses steel for its frame, rather than aluminium. Since the model’s launch in 2014, the braking system has been upgraded with ABS, and features a blend of 292mm disc and radial four-piston calliper up front.

That licence-dictated power limit of 15bhp means there’s very little to choose between the straight-line performance of the race-replica models. The YZF-R125 is also very close in speed and feel to the MT-125, with which it shares so many parts. The YZF weighs 2kg more, so in theory, it might be a fraction slower off the line, before gaining the edge due to its superior aerodynamics, which allow a slightly higher top speed of about 75mph.

Yamaha’s decision to share chassis parts and dimensions with the MT meant both models’ geometry was chosen mainly to suit the naked model, which had to be stable at speed despite its wind-blown riding position. That resulted in the YZF having slightly less racy steering geometry than its predecessor. So, although it feels light and respectably taut, it doesn’t steer with quite the same ease as the wide-barred MT; and, the lack of even a shock preload adjuster means there’s nothing its rider can do about that. But, it’s lively and sweet-handling enough to be plenty of fun, and is also respectably well braked, with the addition of ABS.

The Yamaha isn’t the cheapest of the race-replica 125s, but it should certainly be inexpensive to run. Owners report average fuel consumption of roughly 100mpg, despite the fact that any small-capacity sports bike is likely to be ridden hard. Recommended service intervals are 3,500 miles or every year for an oil change, and double that for spark plug and air filter replacement. The simple single-cylinder engine should mean reasonably low bills, and the bike’s light weight and modest power output mean that it’s also kind on tyres and brake pads.

The four-valve YZF motor has built up a strong reputation for reliability, too, and if it’s well looked after, it should give very few problems. Perhaps the one time to be wary is when buying a second-hand example, as small-capacity sports bikes are likely to have been owned by young riders with more enthusiasm than cash or mechanical sensibility. Hard use, combined with infrequent servicing or a failure to maintain oil levels, could lead to trouble with any bike, so caution is required, especially if buying privately. Like most Yamahas, the YZF comes with a two-year, unlimited-mileage warranty.

The YZF-R125’s recent redesign included new bodywork, featuring a full fairing, whose headlamps and central duct are intentionally reminiscent of Yamaha’s racy YZF-R6 middleweight. As with most sports bikes, the moderately leant-forward riding position works well at higher speeds, but less so in town, where the MT-125’s more upright approach would make more sense. Compared to its naked sibling, the YZF-R125 has not only lower, clip-on bars, but also slightly higher, more rearset footrests and a seat that is 15mm higher, at 825mm. It’s well built and reasonably roomy, even for taller riders, but not really designed for more than very brief two-up riding.

The level of finish is good, with a choice of blue, red or black paintwork, and the impression of quality is enhanced by the digital instrument panel, which includes gearshift warning lights, as well as information on fuel consumption and other details that can be toggled by pressing a button on the handlebar. Accessories include practical parts such as a tank bag, tank pad and 12V socket, as well as a double-bubble screen, crash bungs and Akrapovic silencer. However, unlike the rival Aprilia, it has no option of a quick-shifter. 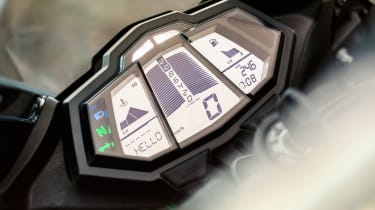