Its name means “Devil” in Ducati’s local Bolognese dialect, and the V-twin more than lives up to its name 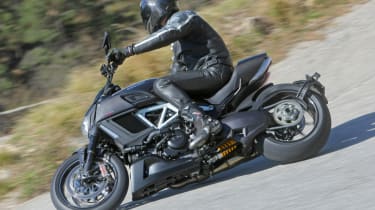 It now seems strange to recall that the Diavel polarised opinion when it was launched in 2011, with some Ducati fans bemoaning the company’s move away from its traditional sporty bikes. Most who actually ride the 1198cc V-twin are captivated by a machine that delivers plenty of traditional Ducati power with a more laid-back look, but retains much of the chassis performance for which the brand is renowned. There are plenty of cheaper roadsters, but arguably none with a comparable blend of speed and style.

The Diavel is a distinctly different Ducati, although it is very much part of the firm’s main range (unlike the separate Scrambler) and has generated a family of its own. Alongside the basic Diavel, costing £15,495, is the upmarket Diavel Carbon, which we tested, and which justifies its £18,695 price by using carbon-fibre for its front mudguard, tank and seat covers, and also features forged aluminium wheels and different silencers.

New for 2017 is the Diavel Diesel, not powered by a new oil-burning engine, but a limited-edition model, linked with the Italian clothing brand. Just 666 are being produced, at £20,895 each, featuring a hand-brushed steel tank and tailpiece, as well as a ribbed leather seat. These days, the extended family also includes the even more radical XDiavel, a genuine cruiser with more laid-back geometry and an even more grunty 1262cc engine.

The base model costs £16,595 and the more lavishly equipped XDiavel S is £3000 more. The Diavel’s traditional rivals are Harley-Davidson’s V-Rod Muscle and Yamaha’s V-Max, while more recent powerful cruisers include Harley’s Low Rider S and the Honda Gold Wing F6C. None blends power and style in quite the same way as the devilishly different Diavel. 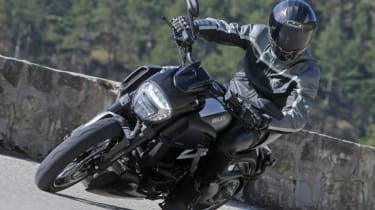 The liquid-cooled V-twin engine is Ducati’s Testastretta 11 Degrees DS, the initials standing for the Dual Spark plugs per cylinder layout, as also used by the Multistrada and Monster 1200. Maximum output is 160bhp at 9,250rpm, with a notably strong torque output at low revs. It has ‘ride-by-wire’ throttle control (with no mechanical link between the accelerator and throttle) and three riding modes: Sport and Touring, which deliver the full 160 horses with differing throttle response, and Urban, whose softer delivery is limited to 100bhp. The unchanged six-speed box leads to a chain final drive (unlike the XDiavel, which has Ducati’s first belt-drive system).

The chassis layout is based on a traditional tubular steel frame, but the forks are kicked out at 28 degrees, the wheelbase is a train-like 1590mm, and the eight-inch wide rear wheel holds a gigantic, 240-section tyre. The suspension is of high quality and multi-adjustable, while the brake system combines Brembo’s four-piston radial Monobloc calipers with 320mm discs up front, aided by Bosch ABS. Tyres are Pirelli’s Diablo Rosso II, on 17-inch rims; in the case of the higher-spec Diavel Carbon, these are forged Marchesinis that save 2.5kg of weight over the standard cast items.

The Diavel is not only one of the quickest and most exciting bikes in a straight line, it also has a satisfying character: it fires up with a throaty bark, and rumbles along with a smooth, yet involving, V-twin feel. Urban, the softest of its three riding modes, limits power output to 100bhp, but in the more aggressive Touring or Sport modes, the Diavel accelerates towards its 150mph-plus top speed at a rate that even Ducati’s 1299 Panigale can barely match. At 205kg dry, the Diavel is much heavier, but its extra length helps keep the front wheel down, while its fat back tyre is finding enough traction to spin the Earth a bit faster. 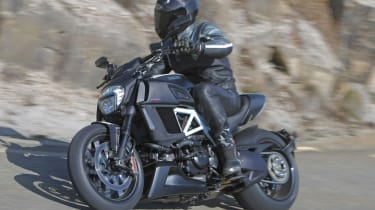 The performance of the chassis is equally impressive - a bike with cruiser-like steering geometry and a huge rear tyre really shouldn’t handle so well. Inevitably, the Diavel feels slightly cumbersome in very tight bends, but most of the time it’s remarkably composed. Ride quality is very acceptable, despite the relatively short-travel suspension, and the Diavel has none of the cornering-clearance limitations of many cruisers. It also has outstanding braking power, thanks to its stability-enhancing length combined with the ferocious bite of the Brembo Monobloc calipers.

The Diavel isn’t the sort of bike that should be bought by anyone looking for low running costs – that enormous rear tyre alone is expensive and will get worn out very quickly if the engine’s performance is used to anything like its full potential. The engine is also thirsty when used hard, gulping fuel at 30mpg or worse. However, owners typically average about 40mpg, giving a range of 120 miles or slightly more from the 17-litre tank. Thankfully, the tank-top instrument panel now has a fuel gauge, following a revision in 2014. 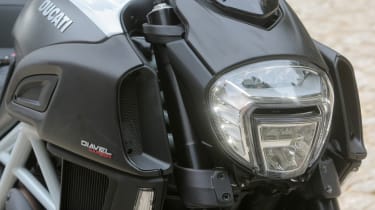 That update also saw major service intervals extended to 18,000 miles, which, given that owners typically ride only a few thousand miles per year, means that most will never need to get their desmodromic valvegear checked. Ducatis have a pretty good reliability record these days, and the Testastretta engine is very well proven. Like all the company’s bikes, the Diavel comes with a two-year, unlimited-mileage warranty that requires the bike to be serviced in an authorised workshop.

The original Diavel was a bold, radical piece of design when it was introduced, backed up by excellent build quality that contributed to a very striking machine. The current model has even stronger visual impact with larger air scoops on each side of the petrol tank, new LED headlight and indicators, and a redesigned exhaust system with aggressively slash-cut silencers. Neat touches include the hand adjusters for damping and shock preload on the front forks, and the way that the pillion grab-rail and rear footrests can quickly be tucked out of sight when not required. 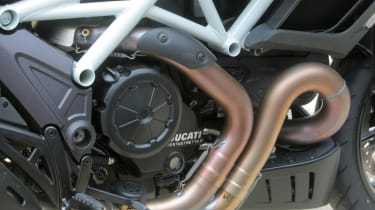 Such a powerful naked bike isn’t created primarily for practicality, but the Diavel is fairly useable, helped by a modest amount of wind protection from the combination of its headlamp surround and handlebar riser. The seat is very low, at 770mm, which helps low-speed manoeuvrability, and sufficiently well padded to allow a respectably comfortable ride. The touring-oriented Diavel Strada variant sold poorly and was soon dropped, but additional long-distance ability can be added via that model’s screen and ABS/nylon panniers. These are still available as accessories, along with numerous neat carbon-fibre and aluminium parts.