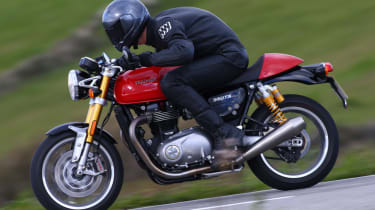 The Thruxton R and its slightly less exotic standard Thruxton sibling, both of which were introduced in 2016, are perfectly placed to take advantage of the current hipster-led enthusiasm for cafe racers. Both are essentially sports versions of the new-generation Bonneville T120 roadster, inspired by the race-developed Triumph Thruxton that ruled Britain’s roads half a century ago. The more upmarket Thruxton R, in particular, is a stylish and cleverly engineered machine that combines a torquey 1200cc parallel-twin engine with a traditional, yet high-quality, chassis to deliver fine performance and an addictive riding experience.

Triumph’s current, liquid-cooled Thruxton duo replaced the Hinckley firm’s air-cooled Thruxton model, a mildly tuned and bikini-faired Bonneville variant that had belatedly become a success thanks to the recent boom in café racer culture, some years after its introduction in 2004.

Inspiration for all the modern models was the original Triumph Thruxton of the mid-Sixties – a tuned, limited-edition version of the 650cc T120 Bonneville, named after the Hampshire circuit where Triumph had scored notable success in a prestigious long-distance race.

Both the current Thruxton models are powered by the same ‘high power’ version of Triumph’s 1200cc parallel-twin engine, essentially a tuned version of the Bonneville T120 unit. They share the classical café racer riding position, thanks to clip-on handlebars and rear-set footrests. 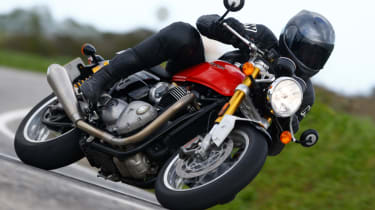 The standard Thruxton costs £10,800 in black, and £150 more in red or green; the racier R model, featuring upmarket suspension and brakes plus stickier tyres, costs £12,200 in all four of its colour options. Both Thruxtons are rivals for other new-generation retro sports models including BMW’s R nineT Racer, Ducati’s Scrambler Café Racer, Yamaha’s XSR900 and old foe Norton’s Commando 961 Café Racer.

The 1200cc parallel-twin engine is essentially a hotted-up version of the Bonneville T120 unit, sharing its SOHC, eight-valve layout and liquid-cooling. The Thruxton’s ‘high-power’ unit is upgraded with an increased compression ratio and a lighter crankshaft assembly that allow it to rev 500rpm higher. As a result, it has a maximum output of 96bhp at 6750rpm, 17bhp up on the Bonneville’s 79bhp output. The Thruxton also gets an extra, sharper ‘Sport’ engine mode, in addition to the T120’s Road and Rain modes, and shares its six-speed gearbox. 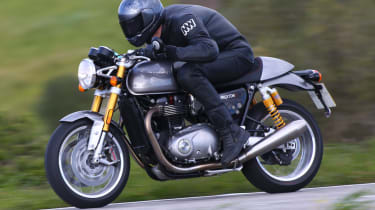 The chassis layout is based on the T120’s tubular steel frame, but with a lighter rear subframe, steeper geometry and a 17-, instead of 18-, inch front wheel. The standard Thruxton follows the Bonneville in using Kayaba suspension, while the Thruxton R has more upmarket components: Showa Big Piston Forks and Öhlins remote-reservoir rear shocks, plus Brembo’s four-piston Monobloc front brake callipers instead of twin-piston Nissins. It also wears stickier tyres, its wire-spoked wheels being fitted with Pirelli’s Diablo Rosso Corsas instead of the standard model’s sports-touring Angel GTs.

The Thruxton R delivers more than enough straight-line performance for serious street-riding entertainment, even if its blend of sub-100bhp output and 220kg-plus weight means that it can’t match a truly sporty modern bike. Despite its racy image, the Thruxton R is pleasant to ride at low speed, partly because its clip-ons are set well above that shiny top yoke and the footrests aren’t dramatically high or rear-set. However, the Triumph also has enough top-end power to be thrillingly fast. It accelerates hard, cruises effortlessly and long-leggedly at the legal limit, and goes on to a top speed of about 130mph. 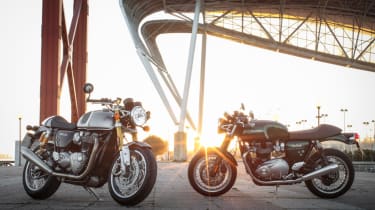 The Thruxton R’s chassis performance is in a different league to that of the Bonneville. At just over 200kg, it’s not particularly light, but its sharper geometry and more forward-biased weight distribution transform the handling, in conjunction with a lighter 17-inch front wheel and higher-quality suspension that is firm, without being harsh. Pirelli’s Diablo Rosso Corsa tyres are suitably grippy, there’s plenty of ground clearance for road use and the Thruxton R is superbly well braked, its blend of big, 310mm discs and Brembo Monobloc callipers providing fierce stopping power, as well as giving plenty of feel through the lever.

For a sporty bike, the Thruxton should prove reasonably easy to live with. The economical Triumph returns 45mpg when ridden hard and over 50mpg in normal use, giving a typical range of 150 miles from the 14.5-litre tank. Its traditional-looking, chrome-rimmed clocks incorporate a fuel gauge, while instant and average consumption readings are among the information that can be toggled via a button on the left handlebar. The display also indicates when a service is due, which is less frequently than the previous Bonneville family, with intervals at 10,000 miles. 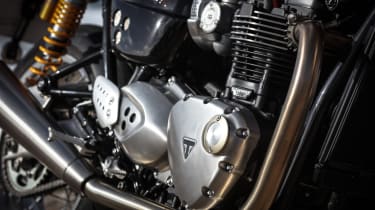 Reliability should be good, although this engine is in a higher state of tune than the Bonneville T120 unit. The stylish ignition key activates an immobiliser, and the Thruxton is likely to entice owners to ride it sufficiently hard to use tyres and brake pads at a fair rate – not that it can be blamed for that. As a sporty retro bike, it’s likely to cost more to insure than a roadster such as the Bonneville, but less than a high-tech superbike; and, it comes with Triumph’s normal two-year, unlimited-mileage warranty.

The Thruxton is a superb piece of design, with a clean and classical look, yet without being particularly retro, especially in the case of the R, with its gold fork legs and yellow shocks. It’s very nicely finished, too, and especially the SOHC engine, with its neatly machined cylinder fins (which contribute to its cooling), compact radiator and numerous neat details, from inspection plates to bolt-heads. The Thruxton R is also beautifully detailed. As well as its shared pair of chrome-rimmed, alloy-mounted instruments and period-style, flip-up Monza fuel cap, it has a polished top yoke, stainless steel strap along the top of its fuel tank, and colour-matched seat hump. 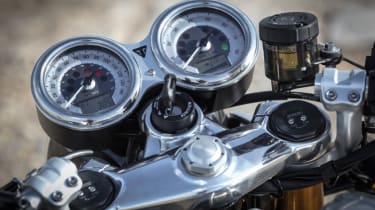 Café racers are not designed to be practical, but the Thruxton should prove reasonably easy to live with, provided you want to ride alone – a dual-seat and pillion pegs cost extra. Its seat is quite high, at 810mm, but despite its racy image, the Triumph is reasonably comfortable at low speed, because its clip-ons are set well above that shiny top yoke and the footrests aren’t dramatically high or rear-set. There are plenty of practical parts in the list of more than 150 accessories, which range from a colour-matched half-fairing to Vance & Hines slip-on silencers, via rubber tank knee-pads, a leather tank strap and throw-over panniers.