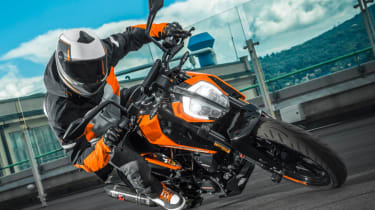 The 125 market started to get very stale after two-strokes became almost extinct. It needed something like the Duke 125 to get youngsters excited again. As such it makes a great learner-legal bike for a 17-year-old (or older) novice. It comes with all the latest technology, LED lights, ABS, TFT dashboard with built-in connectivity for a Smartphone and the kind of style reserved for the likes of KTM. As a user-friendly machine with enough street cred for the average teenager, you’ll find it hard to beat.

When it was launched in 2011 the Duke 125 was a turning point for KTM. For the Austrian off-road specialists it was their first on-road 125 and would quickly spawn both the 200 and 390 Dukes to bridge the gap between the larger capacity Duke models.

Built for KTM by the renowned Bajaj factory in India the price could be kept to affordable levels, whilst quality wouldn’t be compromised. The 2017 model has been brought bang up to date with a revised chassis and engine, enhanced quality and a fancy new TFT dashboard.

Making the permitted 15bhp, the Duke 125 is entertaining enough. The fuel-injected engine is lively, pulls very well and sounds great, even with the standard silencer (incidentally it’s side mounted now, rather than the under slung original). The KTM has a close-ratio six-speed manual gearbox but most of the time the first five gears are enough, sixth is more like an overdrive for motorway or faster road use. 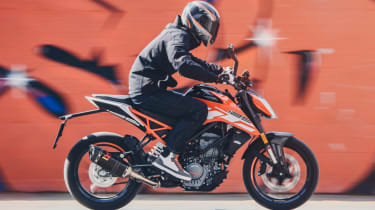 Brakes are powerful enough, they’re made by Bybre, a subsidiary of Brembo and have a quality feel along with the stopping power you’d expect. KTM were way ahead of the crowd (and Euro 4 regulations) with the Duke, it was the first 125cc bike to come equipped with ABS way back in 2013. It runs a two-channel Bosch system and as you’d expect, it works very well.

Ergonomically the Duke is built to fit, its seat height is fairly high at 830mm but the seat itself is narrow enough to make it accessible for shorter riders. The bike has a fairly comfortable riding position. The latest model places a bit more weight over the front end than the original model but the wide bars stop it from feeling cramped.

Performance-wise the bike goes well, it accelerates quickly and although it’s not too loud, the exhaust note gives it a feeling of a larger capacity machine. You’ll see 70mph on the multi-colour TFT dashboard, a feature addedfor the 2017 model year. 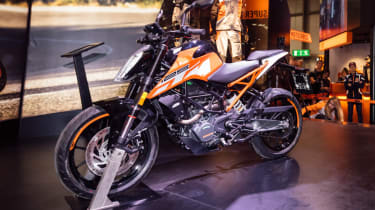 The bike isn’t overheavy at 137kg’s but its weight is carried low down in the steel trellis frame, making it very easy to handle, it gets around corners well too. That’s thanks to great geometry, a stiff frame, WP suspension and upside down forks.

A few initial problems with the Duke have been overcome and the latest model has a quality feel about it. It comes with a two-year warranty for added peace of mind and is backed up by a nationwide dealer network. Carole Nash lists the Duke as a group 7 of 17 for insurance purposes, so it won’t be overly expensive to insure or run. The fuel-injected engine has been refined for 2017 so expect close to 100mpg if you’re taking it steady, not that many 17 year-olds will be of course.

The Duke 125 costs just over £4,000, more expensive than many 125s but cheaper than some and you are getting a good-looking, useful and practical bike. Designed by the world-renowned KISKA Design Agency it was always going to look the part. 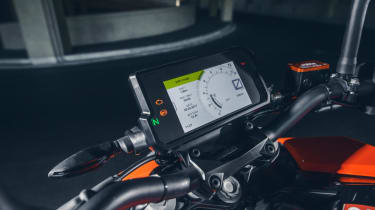 Aside from looking good (important to most riders), it’s also perfect for the daily commute, can be used in all weathers and doesn’t take much looking after. Build quality is very good (improved for 2017) and the list of accessories means you can personalise it to your hearts content.