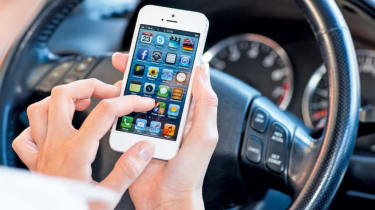 Nearly one in five young drivers say they have taken a video call on their phone while behind the wheel, new data reveals.

Eight per cent of all motorists have made video calls while driving, a number that rises to 18 per cent for drivers aged between 17 and 24. For drivers aged 25 to 44, meanwhile, the figure is 13 per cent.

The worrying findings come from the RAC’s annual report on motoring, which saw 3,068 drivers surveyed on a number of issues. Nine per cent of 17 to 24-year-olds admitted to playing mobile phone games behind the wheel, making them three times more likely to do so than the average UK driver.

Figures such as these are likely to raise concern among road-safety experts, who have previously warned about “plateauing” traffic casualty figures, which have not fallen significantly over the last decade. In-car distractions - including mobile phones and complex infotainment screens - are being investigated for the role they might play in such stagnating figures.

The survey found other drivers’ use of handheld mobile phones was the second-biggest concern of UK motorists, the first being the state of local roads. Some 32 per cent of those surveyed said the issue of mobile phone use behind the wheel concerns them, and 79 per cent want authorities to use camera technology to catch those flouting the law.

Despite that high level of support for more effective enforcement, 29 per cent of motorists questioned admitted that they themselves use a handheld mobile phone to make and receive calls behind the wheel - five per cent more than last year, and the highest proportion since 2016. Those aged 17 to 24 are most likely to break the law in this way - 42 per cent admit to it - followed by 25 to 44-year-olds, at 32 per cent.

On a more positive note, the proportion of drivers admitting to texting while driving has dropped from 14 per cent in 2019 to eight per cent this year. Again, 17 to 24-year-olds are most likely to do this, with 15 per cent admitting to it.

RAC road safety spokesperson Simon Williams said: “Our figures highlight what many drivers already know - that the problem of illegal phone use at the wheel has far from disappeared.

“While there’s been a reduction in some elements of this dangerous activity, more people say they are making and taking calls now than at any point since 2016, shortly before tougher penalties were introduced. And the rise in the popularity of video calls means this type of communication represents a new, clear and present danger on the UK’s roads in 2020.”

Inspector Frazer Davey from Avon and Somerset Police’s Roads Policing Unit commented: “The importance of concentrating on your driving cannot be overstated. Using a mobile phone while in charge of a car puts you and everyone else at risk. The consequences of allowing yourself to be distracted while you are driving can be catastrophic. It’s simply not worth it.”