Not great to drive for a few reasons, with an oddly imbalanced engine range including only one diesel option 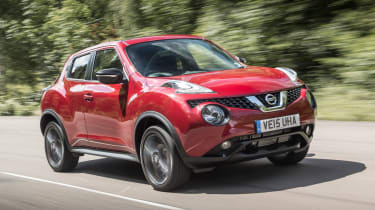 Not the driver’s choice in the compact crossover class, which is mainly down to an oddly imbalanced engine range, with just one diesel option.

The Nissan Juke’s tall SUV stance means it is never going to be able to match the cornering ability of a good supermini such as the Ford Fiesta. Having said that, this Nissan is fine to drive and quite comfortable in most situations.

Light steering makes it easy to drive the Nissan Juke around town, but out on the open road it lacks the feel to add confidence when exploring B-roads. That taller stance equals some body roll while cornering.

As well as the aforementioned visual updates, the 2014 facelift brought the Juke the new 1.2-litre DIG-T turbocharged petrol engine. Also fitted in the larger Qashqai range, it feels much more at home in the compact crossover, making the Juke feel more eager than its size would suggest. 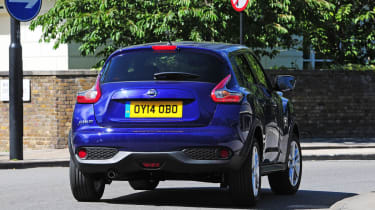 It is not the most refined engine, however, and that’s partly why our pick of the Nissan Juke range is the efficient 1.5 dCi diesel. If you really can’t live with the diesel chatter, or you don’t put in the mileage to make the extra cost worthwhile, the 1.2-litre turbo is the next best bet.

The most focussed member of the range is the Nissan Juke Nismo RS. The steering is weightier and the sports suspension is stiffer than standard. However, all this stiffness makes the ride twitchy across poor road surfaces, plus we’re not sure that trying to make a sporty car from a tall, high-riding crossover is a good idea in the first place. Compared to the best hot hatches, the Nismo leaves the driver feeling strangely disconnected.

If you must have one – the outlandish looks could easily have that effect on you – then we’d recommend going for the six-speed manual version of the Nismo rather than the X-Tronic CVT, which doesn’t work well with this car’s sporty feel.

That rule applies to all versions of the Juke, in fact, a CVT automatic might be the most economical choice because it always keeps the engine in a ‘sweet spot’, but the reality on the road is that it drones loudly under harder acceleration and is very tiresome.

There are six engines in total, four of them petrol – although three of those have similar power outputs, before the range makes a strangely large power leap to the fourth and fifth.

The petrols begin with a 1.6-litre non-turbo with 93bhp, which takes 12 seconds to hit 0-62mph but has a major torque deficiency – just 140Nm – so it needs to be worked hard. There’s a 115bhp version of that engine that’s automatic-only, but as that automatic gearbox is the performance-choking X-Tronic CVT, the 0-62mph only improves by half a second and the Juke becomes even louder.

More refined is the 1.2-litre turbo DIG-T engine, which on paper is not that much quicker – 113bhp and a 10.8-second 62mph time – but better torque (190Nm) and more refinement make it altogether more pleasurable to drive. 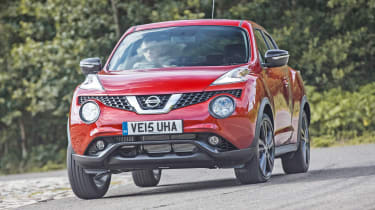 Following on there’s a big leap to 187bhp, courtesy of a 1.6-litre DIG-T turbo petrol, which chops the 0-62mph time down to an almost hot hatch-like 7.8 seconds. It’s also available with a CVT and four-wheel drive, but this is an excessive combination that makes the car less involving while reducing performance (0-62mph down to 8.4 seconds) and offering very little additional useable traction.

Finally there’s the 215bhp 1.6-litre DIG-T engine of the Nismo RS, which chops the 0-62mph time down to seven seconds. It’s very quick, but not as exciting as it promises to be on paper, especially given its engineering links to the Nissan GT-R supercar.

The standalone diesel is a 1.5-litre dCi unit also found in the Qashqai. It has 108bhp and 260Nm torque, which is only 20Nm short of the torque on offer with the 215bhp turbo petrol in the Juke Nismo RS. This makes the diesel feel very flexible at low revs, but it’s also a course engine that’s noisy and not best suited to being worked hard. Given the Juke is not very dynamic in nature, though, this is the one we’d pick.