The Perodua is a decent bargain car for getting from A to B. 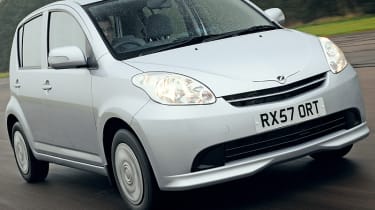 Driving The Myvi isn’t particularly fun to drive, and doesn’t inspire confidence in bends. The damping isn’t that composed, it’s easily unsettled on country roads and the car suffers from considerable body roll. Steering isn’t particularly accurate, either, while the small, narrow tyres see it soon reaching the limit of grip. This small footprint also contributes to disappointing brakes – not good news for emergency stops. The brake pedal is slack too, as is throttle response. And the engine itself, while quick on paper, doesn’t feel so on the road. It’s strained at high revs, and the gearchange is notchy. At least compact dimensions, light controls and a tight turning circle make it a capable choice around town.

Marketplace The Myvi is based on Daihatsu’s Sirion – in comparison to the firm’s other models, it appears positively cutting edge. Only headlights, bumpers and ungainly bonnet lines set the Malaysian apart from the Japanese Daihatsu; both display the short, narrow, tall city-car look. The single five-door bodystyle comes with the single 1.3-litre petrol engine, and a choice of SXi manual or MZi auto trims. The budget hatch has no end of rivals, including the Proton Savvy, Hyundai Getz, Kia Rio and Toyota Yaris. Don’t forget Subaru’s Justy, too – like the Myvi, it’s nothing more than a rebadged Daihatsu Sirion!

Owning There’s plenty of leg and headroom in the back of the Perodua. The driving environment is equally spacious, although the high-mounted and upright driving position won’t appeal to all. Controls are simply and basic, so most drivers will find it easy to get on with. But it could be more inspiring, while the materials aren’t that modern or attractive. What’s more, thin doors don’t give the impression of ‘big car’ solidity, while road and wind noise at speed are pronounced. Low servicing costs make up for a small dealer network and 10,000 mile intervals, though official fuel consumption figures of 48.7mpg could be better – and the Myvi needs to improve on average Perodua retained values of less than 35 per cent. 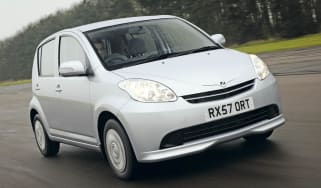 Myvi, the model that is going to make Perodua a household name...
Skip to HeaderSkip to Content