The Proton Savvy is well equipped and roomy, although the gearbox is dreadful and the interior quality poor, too 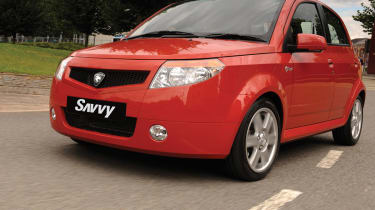 The Proton Savvy is a particularly rare sight on UK roads. It's a small hatchback model made by the company that owns Lotus but the driving experience is some way off what most models in this segment offer. The handling is the best thing about the Savvy but the gearbox, ride and interior quality are all well below par. Although it may be cheap to buy and come well-equipped, the Savvy will lose quite a lot of value when you come to sell it on.

The Savvy gets off to a bad start by having one of the worst gearboxes we've ever tried. The shift is notchy and inaccurate, while an overly springy clutch pedal compounds the problem. This is a shame, because the 1.2-litre Renault-sourced engine supplies decent in-gear performance, though becomes strained above 4,500rpm and takes on a nasty resonance at 5,500rpm. With soft suspension, it rides well for most of the time but be warned that the damping doesn't cope with bumps, and nasty shocks come up into the cabin. On the plus side, the steering is responsive and offers plenty of feedback.

As with most small cars the Savvy will prove to be cheap to run. Fuel economy stands at 49.6mpg, which should ensure trips to the petrol station aren't a regular occurrence and CO2 emissions stand at 134g/km. Insurance and servicing costs will both be low but residual values could prove to be a problem.

The Savvy appears distinctive, even if it's odd from some angles; the front is stylish but the rear is old-fashioned. Five-door only, in just one trim level, Street, the Savvy comes as standard with flared wheelarches, a centrally-mounted chrome exhaust, 15-inch alloys and a rear spoiler. You won't see many on the road either, so exclusivity will be guaranteed. Inside feels low budget with a vast expanse of grey plastic and flimsy glovebox. At least there's a bespoke radio with simple controls and a display screen.

Rear legroom is better than in city cars such as, say, the Toyota Aygo, and the cabin feel pleasingly spacious. The driving position is good, too; the three-spoke sports steering wheel is well placed and a decent size, but it lacks any form of adjustment, while the materials around it are very cheap. And there is the main problem with the Proton; build and material quality are simply not up to class standards, and you don't have to look far to find flimsy fittings and slack switchgear. There is a deep and spacious 207-litre boot included.

Proton offers the Savvy with a 60,000-mile, three-year warranty so buyers are offered peace of mind. Reliability shouldn't prove to be too much of an issue anyway, as no major faults have occurred on the Savvy. Euro NCAP hasn't put this model through the crash safety test just yet but it only comes fitted with two airbags. 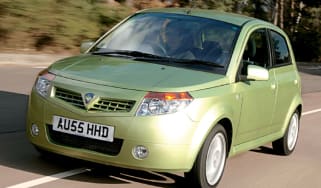 Adding a city car to its limited line-up certainly sounds like a good move for Proton, but how smart is the all-new Savvy?
Skip to HeaderSkip to Content