Myvi, the model that is going to make Perodua a household name... 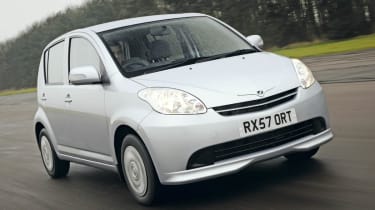 Perodua finally has a car that we can recommend. The Myvi is spacious, okay to drive and well equipped – it even comes with air-conditioning and parking sensors. It’s not up to the same standard as Vauxhall’s Corsa, but it’s much cheaper – especially as the company is offering £1,000 cashback at the moment – and even costs less than Daihatsu’s Sirion, which is essentially the same car. If you’re after a simple, no-nonsense supermini, the Myvi is well worth a look.

Buyers looking for a small, cheap car have plenty of choice these days. But one manufacturer is failing to reg­ister on the public radar: Perodua.

Even though it has the distinction of selling the UK’s cheapest model, in the shape of the £4,792 Kelisa, the Malaysian brand hasn’t made any impact here. Can the new Myvi do better?

It’s essentially a rebadged Daihatsu Sirion, and comes with an 86bhp 1.3-litre petrol engine. And at £7,799, it also represents a saving of more than £300 over its sister car.

Other than a revised bonnet with extra detailing and Perodua badges, the Myvi is identical to the Daihastu. And that’s no bad thing. It’s similar in size to Nissan’s Micra, but looks bigger due to its MPV-style tall roof. The short nose is ideal when squeezing into tight spaces, with the near-vertical back screen making reversing easier.

It feels very grown-up inside. Not only is the cabin practical, with an array of cubbies and cup-holders, but it looks good. The centre console is clearly laid-out, with the instrument binnacle featuring red-backed dials.

But while we like the contrasting silver and black interior trim, some of the plastics aren’t up to the quality of European rivals. What can’t be faulted is the amount of space in the back; the Myvi accommodates three rear passengers in reasonable comfort.

The tailgate opens to reveal a dec­ent luggage space. With the seats in place, there’s a 225-litre capacity, but fold the 60/40 split rear bench flat and you get a 630-litre load bay.

On the road, the Myvi does everything owners would ever ask of it, and nothing more. Enter corners too fast and there is plenty of body roll, while the light steering is short on feedback. But it’s composed at motorway speeds, and the soft ride soaks up bumps.

In most driving conditions, perfor­mance is acceptable, with 0-60mph in 11.3 seconds and a 106mph top speed. But the engine gets coarse at high revs. The five-speed manual gear­box is also rather vague, although it’s preferable to the £700 optional auto. Yet most buyers will forgive the Myvi a lot of its faults when they consider its near-50mpg combined economy.

Even better money-saving news is that Perodua is offering £1,000 cashback until the end of June. It’s no class leader, but as simple A to B transport, the Myvi isn’t bad!

Rival: Honda Jazz The Myvi is as cheap as superminis get, but if you have the cash, the £9,000 Jazz is worth the extra. It’s good to drive, reliable, brilliantly made and incredibly flexible.