Peugeot e-Legend concept could be built after 2020

The Peugeot e-Legend concept - which blends retro 504 Coupe themes with a glimpse of the future - could make production, says boss

Peugeot’s e-Legend concept could make it to production, but not until after 2020, according to brand CEO Jean-Philippe Imperato.

The Paris Motor Show star, featuring an advanced fully-electric drivetrain and driverless technology, matched to retro looks and interior trim, has been a hit with car fans who’ve even started an online petition urging Peugeot to build the car.

And Imperato has given them hope by telling Auto Express, “We love it, but it’s not quite in the pipeline. But we could produce it if we wanted to.” 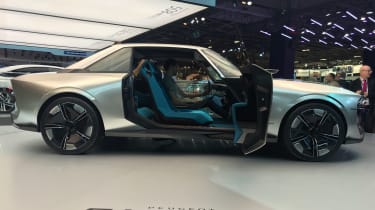 Peugeot’s main focus is that the brand meets the EU’s average CO2 emissions target of 95g/km from 2020 so that it won’t incur any penalties. “We won’t pay one Euro, Pound, Dollar or RMB as we will be compliant,” said Imperato.

However, cars like the e-Legend and any future GTI models will have to wait until after 2020, with Imperato telling us, “We must be fully compliant on the CO2 side before we start to develop any of these models.

“We will mount a performance offer, but not before our global balance on the CO2 side is secured.”

The online petition also got the attention of the Peugeot boss, with him commenting on Twitter, “If we get to 500,000 we might really have to consider it…”

Imperato hinted that any future performance model could make use of Peugeot’s new plug-in hybrid powertrain, also announced at the Paris show, with up to 296bhp from its petrol/electric mix with four-wheel drive. Plug-in hybrids with either 296bhp or 222bhp will start to appear in 3008 and 508 models from next autumn.

Peugeot's Paris Motor Show concept car is an all-electric, autonomous, modern evocation of the iconic 504 Coupe. Called Peugeot e-Legend, the retro-futuristic design takes its profile from the 504 Coupe and blends it with some of the firm’s more contemporary design elements to create a traditional three box coupe, with what Peugeot says are “realistic” proportions. 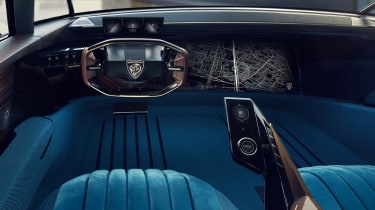 Unlike many modern show cars, the overall profile of the e-LEGEND is less radical and far more showroom friendly, with properly sized windows, no unrealistic overhangs and even very production car like 19-inch wheels. Against the tape measure, it sizes up at 4,650mm long, 1,930mm wide and 1,370mm tall – nothing out of the ordinary for a modern coupe.

The front end interpretation of the 504 Coupe uses double lighting modules to hark back to the original car’s four-piece headlights, though the units are broken up with more modern looking Peugeot triple “claw” lighting signatures, mirroring the car’s taillights.

The square front end boasts a faux grille inspired by the past, but it wears an illuminated Peugeot badge front and centre. Wheel arches carved into the bodywork are a modern take on old-school plastic trim arches. Protruding aluminium beams finished in black, intended to hark back to classic car bumpers, protect both the front and rear ends of the car.

Those bumpers are something Peugeot design boss Gilles Vidal tells he wants to explore for future production models. With front and rear bumpers getting more intricate, it’s becoming more difficult to package vehicles for maximum safety.

“You need a certain length of material to absorb shocks. As the regulations grow harder, and harder for the good reasons of safety, it means the front overhangs of cars grow bigger and bigger. It’s a very modern and contemporary reason to use this kind of touch.

“It would be amazing, but probably hard to achieve. It is an idea we want to explore”, he explains.

Elsewhere on the car’s exterior, more futuristic touches are found in the form of side cameras over side mirrors, and small displays placed at the base of each C-pillar, used to display a welcome message upon unlocking the car and charge status. 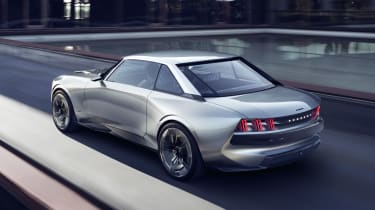 With such real-world proportions it’s easy to see how the e-LEGEND could easily transform into a car not out of place on the road, but Vidal tells us: “It’s not in our plans for now”, given the tiny size of the coupe segment in Europe.

“You can always make something like this economically viable but it’s always then the question of how much money do you put on the table for how much gain afterwards. There is an obvious gain in terms of brand image, but it’s a tricky question for the top management of the company. Positive feedback helps, but it doesn’t wrap up the decision”.

The cabin mixes next-generation infotainment technology with classic materials. It’s hard to miss the mix of rich silk velvet on the seats and 60s style wood all around the cabin, but the main infotainment display sits in the front foot well. The curved screen measures up at 49-inches in size, but it’s not the only display found inside. 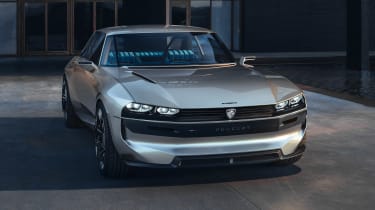 There’s a digital instrument display behind the wheel, plus a pair of 29-inch screens acting as door cards and two more 12-inch displays hidden in each sun visor. It’s all controlled through either voice activation or a six-inch touchscreen branching out between the two front seats, complete with a rotary dial.

The e-LEGEND uses a bespoke electric platform with an all-wheel-drive powertrain fed by a 100kWh battery pack. Power is rated at 456bhp, with 800Nm of torque on tap too. Peugeot claims such a setup would be capable of propelling the concept from 0-62mph in less than four seconds and on to a top speed of 137mph. Range is rated at 373 miles under WLTP, while rapid charging tech means an 80 per cent top up can be achieved in 25 minutes. It’s hypothetical for now, but Peugeot says figures like this are a “realistic vision” of what’s around the corner for EVs, and a target for 2025.

The e-LEGEND isn’t just about showcasing future design and battery tech either – autonomous driving capabilities form a large part of the concept’s character. It features two separate autonomous modes, one pairing back the amount of information shown on the car’s numerous displays for more laid back autonomous journeys, the other unleashing the full arsenal of connectivity features. The steering wheel folds away into the dashboard when the car is driving autonomously, and the front seats recline too.

What do you think of the Peugeot e-LEGEND concept? Would you like to see it make production?