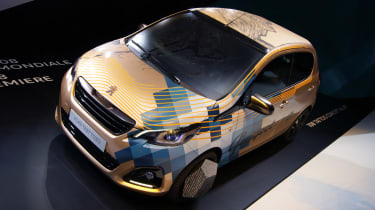 The new Peugeot 108 has been fully revealed at the 2014 Geneva Motor Show. Renault has revealed the new Twingo, but French rivals Peugeot are hot in their heels revealing full details of the all-new 108.

Just like the 107, this new car was a joint project between Peugeot, Citroen and Toyota, and the new versions of the Aygo and C1 have joined the city car showdown at the Geneva Motor Show.

At only 3.47m long, the 108 will be one of the most compact city cars on sale, and is shorter than both the VW up! and Hyundai i10. It will also be lighter than all its rivals, and Peugeot claim the three-door version will weigh just 840kgs, which is 85kgs less than the carbon fibre Alfa Romeo 4C.

This drastic diet means that every single version emits less than 100g/km of CO2, and there are four different three-pot petrol engines to choose from. Kicking off the range is the 1.0-litre e-VTi that produces 67bhp, driving the front wheels through a five-speed manual gearbox. The most powerful version at launch will be the 1.2-litre VTi, with 81bhp, and the 1.0-litre model also comes with the option of a five-speed semi-auto ‘ETG’ gearbox, but no diesel version is planned. 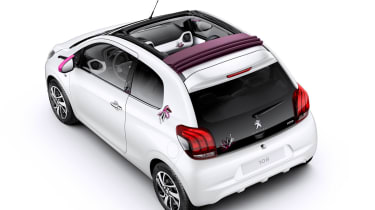 The exterior design takes its cues from the larger 308, with eyebrow LED strips in the headlights and chrome highlights on the grille and the ‘Roaring Lion’ emblem mounted separately on the bonnet. At the back, the new 108 has a glass tailgate just like Twingo, and there will be three distinct body styles, a three and five-door hatch and the 108 TOP! version that you can see in our pictures, which as the name suggests comes complete with a retractable fabric roof for sunny days.

Inside, the 108 feels a lot more hi-tech than before, with a seven-inch touchscreen display (optional on the Active Trim and standard on the Allure) for controlling in-car media, trip computer, Bluetooth and vehicle settings. Yet unlike the 208 the speedometer is mounted on the steering column, while top-spec models will have keyless entry and start as standard.

Despite the compact size, the boot will hold 190 litres of luggage with the seats up, which is slightly less than you get in a Hyundai i10. Fold the seats down and the loading area increases to a respectable 750 litres – not bad for a car this tiny.

To help it stand out in this incredibly competitive market the 108 will come with a huge array of personalization options. Buyers will be able to pick between eight exterior colour schemes – including a pair of dazzling two-tone designs – and the TOP! model with come with a choice of three roof colours, Black, Grey or Purple.

On top of that, Peugeot will offer seven ‘Themes’ which add on extras like decals, stickers, bright trim pieces and seat fabrics, including houndstooth and tartan. The new 108 will be unveiled at Geneva, and is due to go on sale in the UK in July.

Stay up to date with all the latest by following Auto Express on Twitter and joining us on Facebook.