After 9,577 miles we send off our supermini estate with a tour of the UK and a bit of tlc... 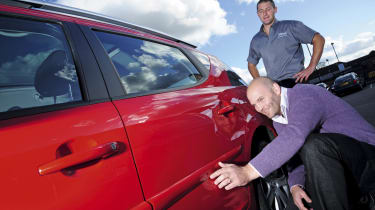 It has been a stop-start 12 months for our Peugeot 207 SW. After a nasty rear end shunt early in the year and a bucketful of boring commuter miles, I thought the pocket estate deserved a proper country outing.

My relatives are spread across Britain so a couple of visits, combined with a holiday in East Anglia, gave me an excellent chance to gauge whether the 207 SW really could cut it as ‘the’ family car. And to make things more interesting, I thought I’d try some of the economy driving tips that I had picked up in the pages of Auto Express.

I found the SW hard work on the motorway. While the driving position is comfortable enough, what lets the Peugeot down is the engine. The 1.6-litre petrol unit is fine around town, but it quickly becomes noisy at speed, thanks to the lack of a sixth gear.

However, as part of my mpg challenge, I intended to keep my speed to around the 60-65mph mark. The quieter engine note that came with it had a calming effect on the whole family. Stress levels lowered instantly, and after all, when you’re on holiday, what’s the rush?

The Peugeot’s trip computer gives a good guide to real-time economy. It’s tempting to take your foot off the gas to see the mpg rocket, but in reality keeping a constant throttle is the best way to save fuel. During our time away, KN57 HVS coped well, whether it was used to shelter from the worst of the British weather, or to illuminate the darkest corners of Norfolk’s country roads with its great adaptive headlights. However, while the SW’s boot is big for a small car, packing in our gear was tight.

After several weeks of trying to keep fuel costs in check, I averaged 37.7mpg – an improvement of only 1.1mpg. Even the slower motorway speed wasn’t enough to offset a fully laden car with the air-con on.

No sooner was the 207 back in the city, than I had another parking scuff to add to the two damaged rubbing strips on the doors. I got in touch with Robins and Day Peugeot in Croydon and ordered two new strips at £60 each, plus painting and fitting. Two weeks later I rang to chase it up, only to be told that neither I nor the order was on their system! Not the best way for the firm’s dealers to improve on their placing of 28th out of 30 in our 2008 Driver Power survey. Thankfully the experts at Shine! saved the day.

Regardless of customer service, I’m sorry to see the 207 SW go. However, in its place has come a Peugeot Partner Tepee. It will be fascinating         to see how they compare.

The 207 SW was put to different use when I spent a weekend with it last month. I was going to stay with the in-laws and had a load of luggage to take, along with an old wallpapering table. Even though it’s based on a supermini, the SW swallowed everything easily. I thought it was comfortable on the motorway, but it really needs a sixth gear!